This rendering shows part of Highrock Village, proposed by Paramount Realty Group as a mutli-use complex on the city-owned parking lot between Maple Avenue and High Rock.

Saratoga Springs city officials plan to review two expansive, multimillion dollar projects that would–if eventually approved by the city–result in a combination of shops, apartments and parking spaces on the city-owned land along High Rock, Maple and Lake avenues.

Representatives of two development groups gave presentations on Nov. 10 at a special City Council meeting. The projects differ, but both specify parking spaces for Saratoga City Center, the general public and residents who would occupy the proposed housing.

Parking is deemed by the city as the key segment of any project that comes to fruition on the property, especially a large portion for City Center.

Paramount Realty Group LLC in Syracuse presented its $77 million proposal. Hyman Hemispheric LLC of Voorheesville also outlined its ideas, without giving a cost estimate. Though Jeff Hyman of Hyman Hemispheric previously stated his plan is in the area of $82 million.

Mayor Joanne Yepsen is assembling, in short order, a technical review committee to assess the proposals. She also said a parking task force will look at overall needs of the downtown area. The flow of traffic and how it would be affected by a major downtown residential-business complex will also be examined. 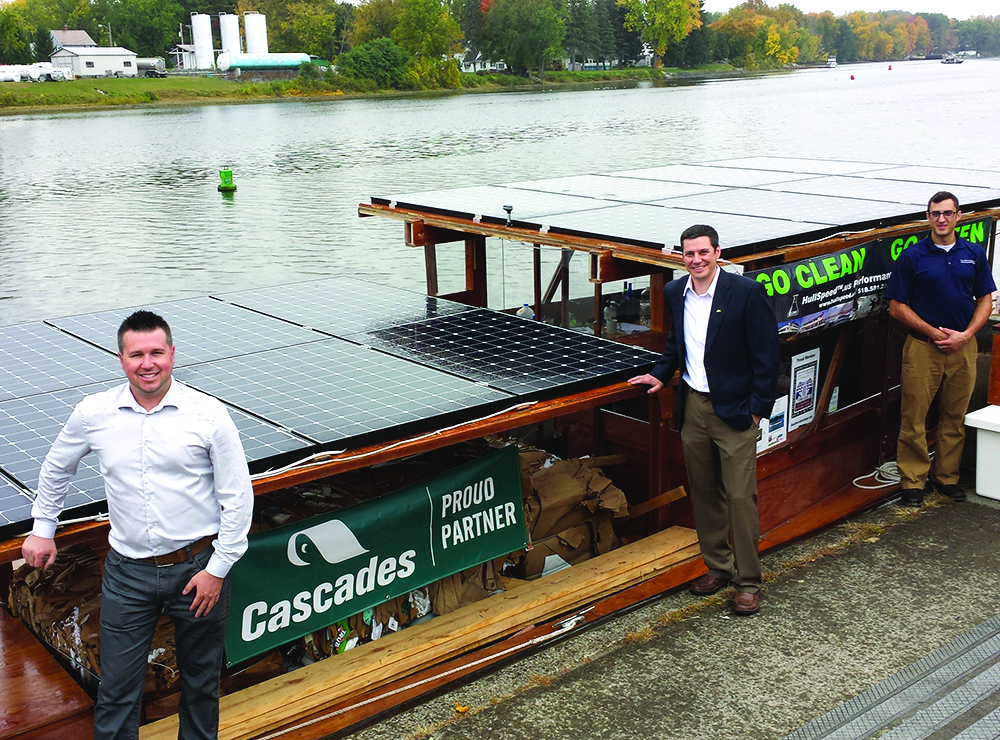 On Oct. 13, Solar Sal, the award-winning
solar powered vessel honored as “best in show”
at the recent Waterford Tugboat Roundup,
became the first-ever boat to traverse the Erie
Canal and deliver a cargo without using a drop
of fossil fuels.

The Chamber of Southern Saratoga County
(CSSC) and several of its member manufacturing
companies were major supporters of the
trip. Quebec-based Cascades, Inc., which owns
tissue manufacturing plants in Mechanicville and Waterford, assisted in the operations, which involved loading six bales (8,000 pounds) of
recycled cardboard from Cascades Recovery’s
Depew, N.Y. facility aboard the boat in Lockport,
then traveling the roughly 320 miles to
Mechanicville for unloading near Cascades
Tissue Group’s local plant.

Hullspeed Coatings of Saratoga Springs,
which applied its signature product to the
vessel’s bottom before its spring launching, also assisted in the journey, with marketing
manager Ian Germain present for both loading
and unloading of the cargo.

Butler-Binley, of Bolton Landing, has a
20-plus year track record of building brands.

Carolyn Keating, owner of Heritage Lifestyle Design, offers advice to people who want to perk up their wardrobes or the interior of their homes without spending a lot of money. BY JILL NAGY Sometimes a tweak is as good...

BY ANDREA PALMER A 14,000-square-foot warehouse storage project is under way at the Geyser Road location of Saratoga Spring Water Co. A.C. Madkour, president of the company, said the project will give the business more storage space to house...