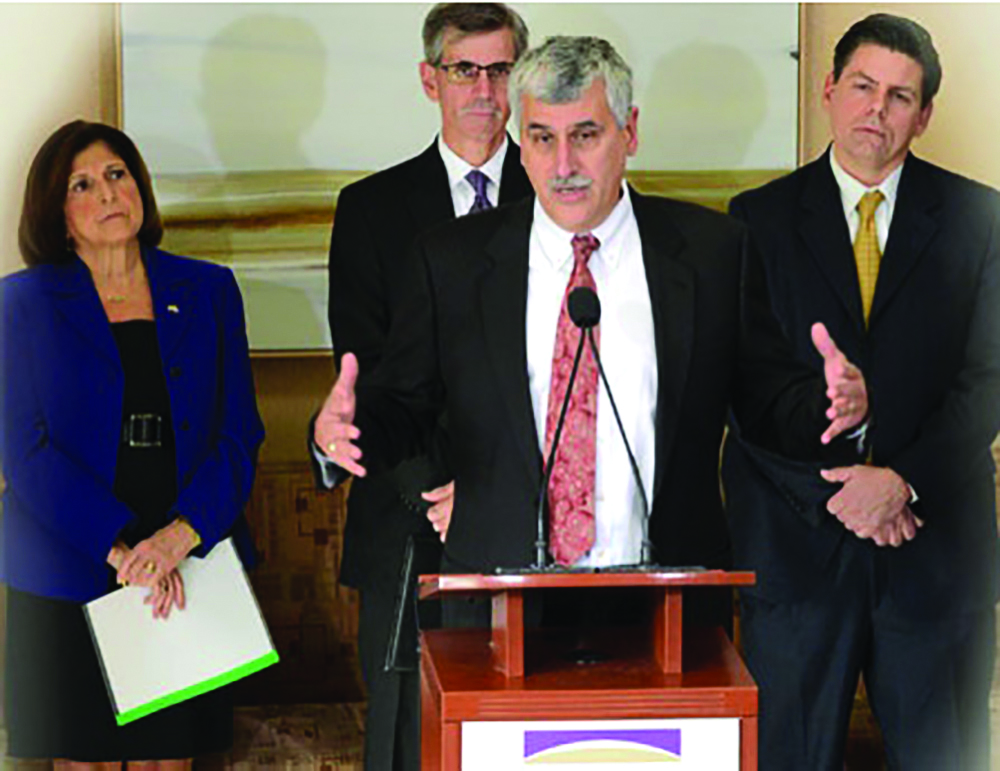 Saratoga Hospital President and CEO Angelo G. Calbone speaks at an October news conference
announcing the intent of his facility to carry out an affiliation plan with Albany Medical Center.

Saratoga Hospital and Albany Medical
Center have signed a letter of intent to affiliate,
paving the way for a more comprehensive,
cost-effective and integrated health
care system.

Leaders of both hospitals announced plans
for the partnership Oct. 27 and said they
expect to finalize the affiliation during 2016.

They said a prime example is the joint
venture, Malta Med Emergent Care, in Malta.
Physicians and medical teams from Saratoga
Hospital and Albany Medical Center have
been working there together since June 2013,
providing comprehensive 24/7 urgent care
and higher-level services.

Another example, officials said, is a collaboration
launched in 2009 to enhance
stroke care by enabling real-time sharing of
diagnostic information.

“For over a century our goal has been to
provide the best possible medical care to
residents of the Saratoga region. Partnering
with Albany Medical Center allows us
to continue elevating the level of care and
offer increasingly sophisticated diagnostic
and treatment procedures for our growing
community,” Calbone said.

Albany Med CEO Jim Barba said the affiliation
would create an integrated, autonomous
health system in the region. He indicated large
health systems from downstate, Pennsylvania
and Plattsburgh are starting to move into the
Albany region.

“It is a new reality that creating our own
system of sufficient size, scope and integration
is the surest route toward achieving our
regional goals of autonomy and quality care
in an environment of lower costs and higher
efficiencies,” said Barba.

“The affiliation we announce today is
another milestone in our shared history of
partnering to better serve the region,” he
said. “Together, Albany Medical Center and
Saratoga Hospital have demonstrated that
partnership is good medicine. Together we
will continue to make the highest quality
medical services in the region more accessible
to more of our residents.”

Officials said Saratoga Hospital will retain
its name, local leadership and governance,
and oversight of services delivered in the
community. The medical staff will remain
part of the hospital. Staffing decisions will
be made locally.

“One of the primary goals of the partnership
is to protect Saratoga Hospital’s future–
to preserve our ability to continue to grow
and provide the care our community needs
and deserves,” Calbone said.

“In addition, affiliating with Northeastern
New York’s only academic health sciences center–
with its medical school and cutting-edge
research programs–enhances the ability of
our medical team and patients to access advanced
options that are available only through
that type of institution.”

Albany Med has a roughly $1 billion annual
budget and 9,000 employees. Saratoga Hospital
has 2,300 full- and part-time workers and
a $300 million budget.

Calbone said there is a difference between
a merger and an affiliation. Under the plan
announced Tuesday, Saratoga Hospital will
keep its name, local leadership and management
of services to the community.

Government-led health reforms seek to reduce
the need for costly hospitalizations. The
emerging payment system, called global budgeting,
calls for health systems to be paid a set
fee per patient for providing all the patient’s
care. It is intended that providers will earn
more under this system if they provide costeffective
treatments early, instead of getting
big fees for providing expensive services later.

For more information, go to www.saratogahospital.org.
Albany Medical Center, northeastern New
York’s only academic health sciences center,
is one of the largest private employers in the
Capital Region. The Albany Medical College,
which trains the next generation of doctors,
scientists and other healthcare professionals,
also includes a biomedical research enterprise
and the region’s largest physicians practice
with more than 450 doctors.