Running a household or a small business can be expensive. However, many people don’t consider the choice and control they have over their energy expenses.

Now the emerging green economy combined with high connectivity has given birth to a bold new era of energy saving options for everyone. What follows is a list of essential, straightforward items that both homeowners and businesses can check off to trigger the type of cost reduction they’ve always wanted in terms of energy efficiency and renewable energy.

In general, the three main steps you can use to unlock the maximum amount of energy savings for your home or small business: Reduce, electrify and replace.

People considering buying a home should not neglect getting a chimney inspection.

Here are five reasons why.

Did you know that very few chimneys that vent a furnace or fireplace have ever been professionally inspected? The National Fire Protection Association (NFPA 211) is the national standard for chimneys and vents and states that a chimney shall be inspected annually. A chimney is always under attack by corrosive flue gasses which wreak havoc on its flue liner.

NYSERDA is seeking applications from licensed home inspectors to deliver home energy ratings during pre-purchase inspections to support homebuyer remodeling of a newly purchased one- to four-family home.

Alicia Barton, president and CEO of NYSERDA, said reducing energy use in homes “provides a foundation for greater statewide energy savings and advances us another step towards meeting Gov. Cuomo’s energy efficiency target by 2025. Piloting home energy ratings with home inspectors offers New York homebuyers access to a useful and informative tool that will identify energy efficient needs, features and upgrade opportunities to inform future remodeling decisions that will help them lower energy costs and increase the comfort of their homes.”

The studio, located at 120 South Broadway, had a Memorial Day soft opening. Since that time, owner Carrie Winograd Kaufman has been busy hiring teachers and planning class offerings.

Regular classes at enLiven will be taught by one of the studio’s five teachers. Guest teachers will also be conducting special classes and workshops.

Kaufman has been teaching yoga locally for more than 12 years. Five years ago, she quit her job to found enLiven Retreats. After working exclusively on her business for several years, she resumed her career as an internet executive. She continues to operate enLiven Retreats in addition to operating her new studio.

Kaufman’s retreat business has evolved over time to meet the demands of her customers. Part of that evolution included opening a Saratoga Springs studio.

Michael Lapolla and Nicholas Galuardi are celebrating 10 years in business with Saratoga Health & Wellness at 538 Maple Ave. in Saratoga Springs.

“Nick and I previously worked for a cardiology group in town, and they went through some changes and challenges. At that point, we ended up going off on our own. We officially opened in November 2009,” said Lapolla.

The center provides a variety of fitness programs, including some specialized for golfers.

Rebecca Mahoney, a certified and registered dietitian, provides nutrition services to all members.  She specializes in behavioral nutrition and can provide very specific advice regarding various medical problems, including diabetes, high cholesterol, hypertension and eating disorders. 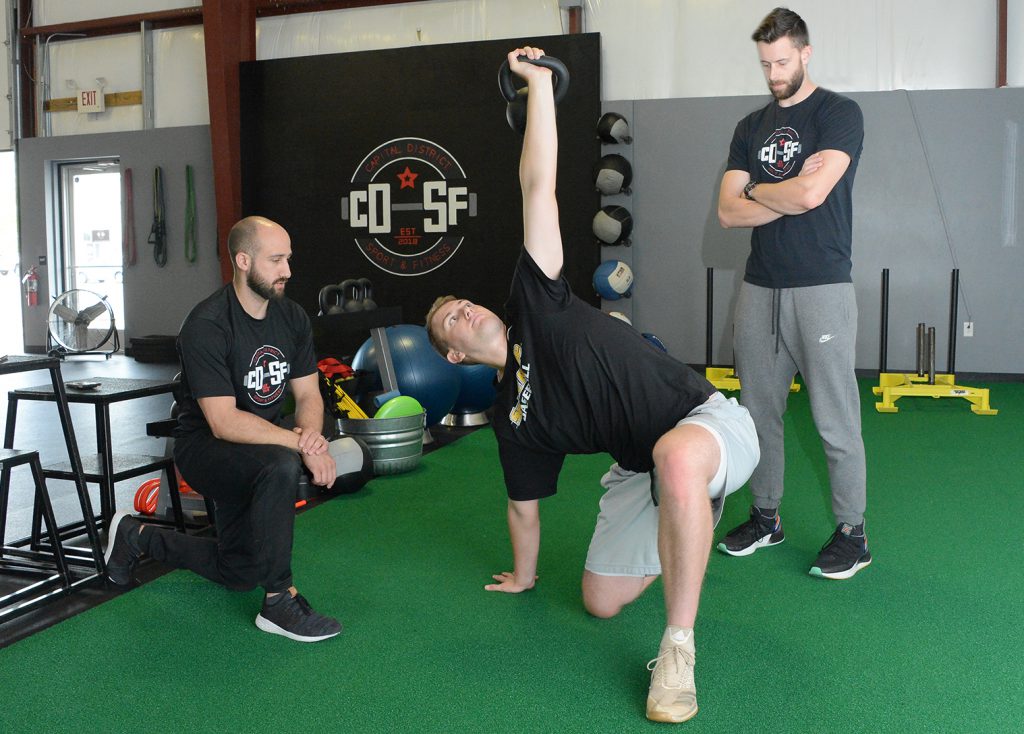 Capital District Sport & Fitness (CDSF), located at 21 Wood Road in Round Lake, celebrated its first year in business in June. Owners Mike Sirani and Dan Jones are Capital Region natives who met while on the baseball team at Springfield College.

After receiving a B.S. in applied exercise science, Sirani moved to Boston and worked as a trainer for professional, collegiate, and high school athletes. Jones stayed on at Springfield College after graduating with a B.S. in sports biology. He served as a graduate assistant coach for the college’s baseball team while working on his M.S. in exercise science with a concentration in exercise and sport psychology. After earning his M.S. he returned to the Capital Region to begin his training career.

Sirani relocated to the area after he and Jones decided to open a training facility together. Although they specialize in small group, semi-private training, they also offer group fitness classes.

The GlobalFoundries-Town of Malta Foundation is accepting grant applications for its next round of funding to support local community organizations.

Applications for grant funding can be submitted electronically or may be downloaded and mailed to the foundation by Oct. 31.

The foundation plans to award approximately $160,000 in grants to selected organizations by the end of this year.

Instructions and links for the application can be found at the foundation’s website, sites.google.com/site/gfmaltafoundationorg/home.

The Wesley Foundation, the philanthropic arm of The Wesley Community, will host its third annual Saratoga Grandparents Day celebration on Sunday, Sept. 8 from 9:30 a.m. to noon at the Saratoga Springs City Center.

The annual event honors grandparents and great grandparents by providing an opportunity for families of all ages to spend time together on National Grandparents Day. The morning will include activities for all ages, including carnival-style games, face painting, crafts, balloon art, a magician, and photo opportunities, amongst other activities.

The first 100 grandparents to enter the event will receive a special giveaway bag. Admission is free. Donations will also be accepted to support the mission of The Wesley Community.

“We are thrilled to host a unique Grandparents Day celebration in Saratoga Springs for a third consecutive year,” said Foundation President Don Braim. “We look forward to seeing families of all ages spend time together honoring their grandparents on this important national holiday that celebrates the members of our family who do so much for us.”

Area restaurants will offer samples of ethnic cuisine on the streets of downtown Saratoga Springs at the sixth annual International Flavorfeast.

The event, hosted by the Saratoga Food Fanatic and Network Saratoga, will take place 11 a.m. to 4 p.m. on Saturday, Oct. 12.

That morning, people can pick up your Flavorfeast “passport-map” of participating restaurants/businesses in front of Fingerpaint Marketing on the corner of Broadway and Division Street.

This map is intended to help people plan the day’s itinerary of travel to a variety of restaurant destinations for $1 food samples from countries all around the world.