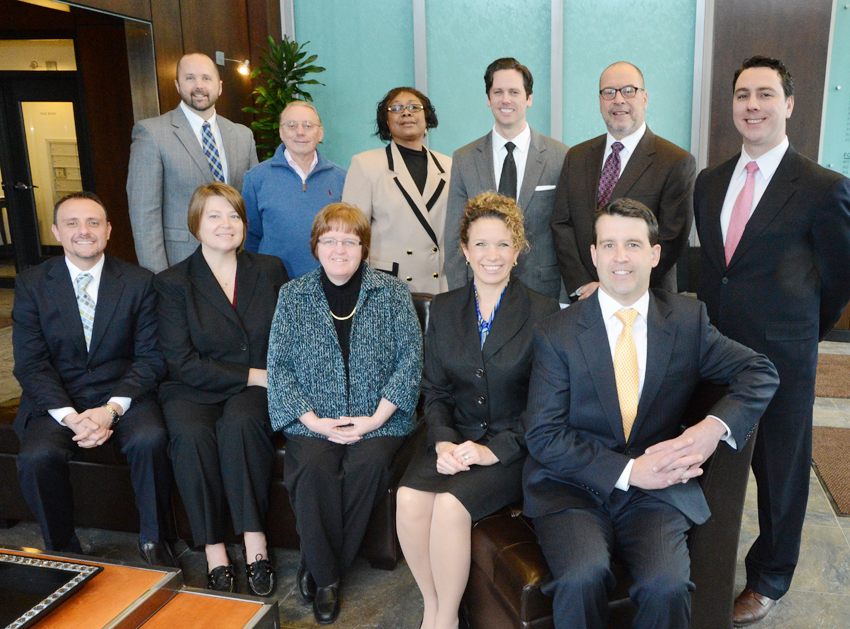 The staff of Merrill Lynch gathers in the lobby of its new offices at 18 Division St. in Saratoga Springs, where the company has 3,500 square feet on second-floor space

Thanks to “tremendous growth and
success in the last year and a half,” the
Saratoga Springs office of Merrill Lynch is
about to move to larger quarters, according
to John David Cornell, resident director of
the office.

The office opened in September 2011
with two advisors (formerly called brokers)
and one administrator. Today, there are nine
advisors, three other staff members and two
part-time staffers. Cornell said he is looking
to hire more.

The new offices will occupy 3,500 square feet on the second floor of 18 Division St., above the Chianti Restaurant and across the street from the Saratoga Springs branch of Bank of America, which owns Merrill Lynch.

Cornell is pleased about the proximity of the office to the Bank of America branch, although it did not figure into the choice of the new location. “This allows us to offer a full range of investment and financial services,” he noted.

Bonaccio Construction, which owns the building, did the contracting work on the new facility using standard Merrill Lynch plans. “We have several thousand of these offices,” Cornell noted, and they all, pretty much, follow the same blueprint.”

The Saratoga Springs office is part of Merrill Lynch’s Capital Complex, headed by managing director Jennifer MacPhee. According to MacPhee, the Capital Complex is the top performing of 120 such groups in the United States, based upon number of employees, revenue growth and amount of assets under their management.

Its acquisition of Merrill Lynch made Bank of America the largest brokerage company in the world, according to Cornell. Cornell is a Saratoga Springs native but left the area after high school. The 2011 opening of the Saratoga Springs office was a homecoming for him and he hopes not to have to leave again. He began his career with Fleet Bank and was absorbed, along with that bank, by Bank of America.

Continuing growth is expected, but “we have enough room in that building to expand without moving again,” Cornell said. To help fuel that growth, he invites qualified investment advisors to send him their resumes.