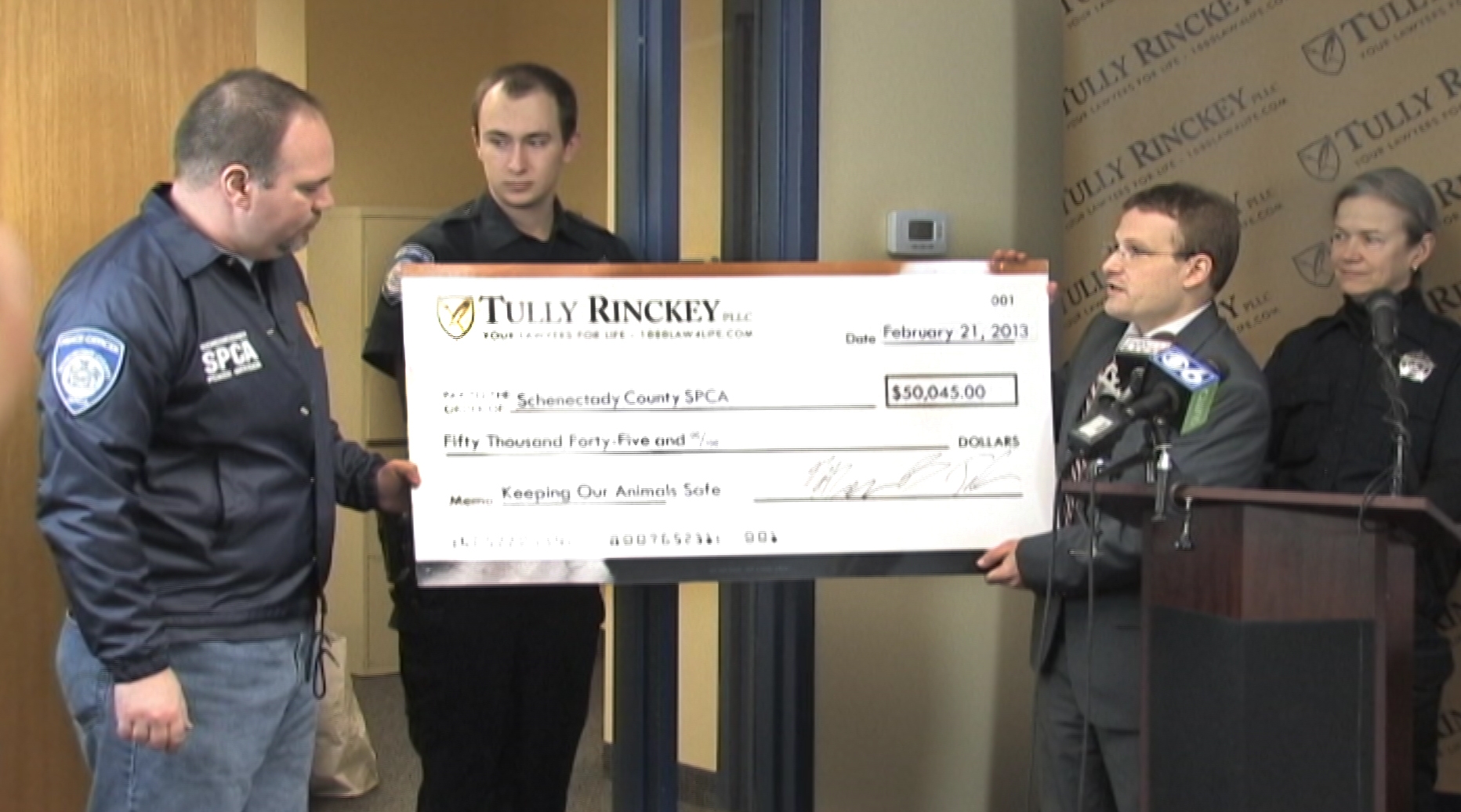 Tully Rinckey PLLC Managing Partner Greg T. Rinckey, at right, presents the Schenectady County Society for the Prevention of Cruelty to Animals (SPCA) with a check for $50,045

Officials at the Tully Rinckey law firm said a legal victory in New York’s highest court allowed it to make its largest donation in firm history.

Tully Rinckey PLLC Managing Partner Greg T. Rinckey presented the Schenectady County Society for the Prevention of Cruelty to Animals (SPCA) with a check for $50,045 in February. The check represented the amount the New York State Court of Appeals awarded the firm in April 2012 in the landmark case SPCA v. Mills, officials said.

In addition, Tully Rinckey PLLC also joined the SPCA in unveiling a 2013 Chevy Tahoe that the nonprofit organization recently purchased with the help of those funds. At an event at Tully Rinckey PLLC’s Albany headquarters, SPCA Chief David Dean – flanked by volunteers – explained how the firm’s donation, along with grants from the Wright Family Foundation and Carlilian Foundation, enabled the organization to purchase and retrofit the vehicle. The organization also invited onlookers for a ride-along to demonstrate the special features of the much-needed SUV.

Dean said the organization needed these donations in order to replace its aging police cruiser, which has over 110,000 miles on it and was repeatedly put out of service last year due to repairs.

“We have a growing team of volunteer law enforcement officers. But if we can’t promptly respond to reports of animal abuse because the car is in the shop then the strength of our force is weakened,” said Dean. “With this donation, Tully Rinckey is empowering the SPCA so we can fight animal abuse and neglect wherever and whenever it happens within our jurisdiction.”

According to the law firm, the impetus for SPCA v. Mills was the New York State Department of Education’s 2008 refusal to respond to an SPCA Freedom of Information Law (FOIL) request for the names and street addresses of all licensed veterinarians and veterinary technicians in Schenectady County. The Education Department, which licenses professionals statewide, claimed it could not release that information due to privacy concerns. The refusal prompted the SPCA – with the help of Tully Rinckey PLLC’s pro bono representation – to sue the Education Department.

In October 2011, the New York Court of Appeals ruled that an agency may not withhold a record solely because some of the information in that record may be exempt from disclosure. The court went on to explain that the agency is responsible for redacting any of the private information and is still required to supply the record. In all, the firm donated more than 500 hours to litigating this case and was reimbursed for 280 hours of work conducted by 15 partners, associates, law clerks, and paralegals.

In what the law firm called “a rare rebuke,” the court criticized the agency, saying it was “at a loss to understand why this case has been litigated” and that “an agency sensitive to its FOIL obligations could have furnished a redacted list with a few hours effort.”

“We are pleased to see that our efforts will allow the SPCA to carry out its mission in the community,” said Rinckey, who also serves as the SPCA’s deputy chief of law enforcement.
Tully Rinckey PLLC’s commitment to the SPCA dates back to 2008 when Founding and Managing Partners Mathew Tully and Greg Rinckey founded the organization. Over the past year, the SPCA’s ranks of volunteer officers have doubled to 20. These volunteers work with law enforcement agencies to conduct criminal investigations, execute search warrants, and make arrests for misdemeanor and felony violations of New York’s animal cruelty laws. Additionally, they independently maintain and operate an animal abuse and neglect hotline.