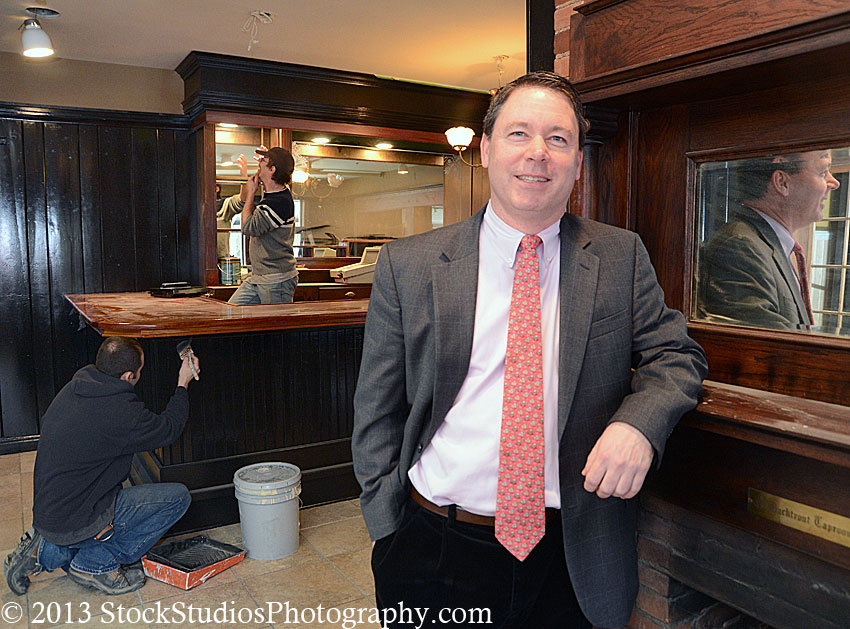 Bob Lee stands in what will become The Brook Tavern, a restaurant and bar on Union Avenue that was most recently the Turf Club, and before that Springwater Bistro

Bob and Brenda Lee, owners of The Wishing Well in Wilton, are venturing out. They will be opening and restaurant, The Brook Tavern at 139 Union Ave. in Saratoga Springs, the former Springwater Bistro.

“Our goal in opening The Brook Tavern is to create a comfortable neighborhood restaurant where guests can enjoy quality food and beverages in a warm and inviting atmosphere,” said Bob Lee.

There will be similarities between The Wishing Well and The Brook Tavern, but those similarities will be in the approach to hospitality as opposed to specific menu items, he said. Certain Wishing Well traditions, such as Tuesday To Go and the popular oyster night, will become features at The Brook, but the restaurant will have its own identity.

The Wishing Well was started in 1936 and was purchased by the Lee family in 1968.

The Lees felt The Brook Tavern location offered an opportunity to do something unique and interesting in a historic neighborhood setting. They believe that if they offer affordable, quality food and an interesting line up of beers, wines and spirits, that it will be well received.

Chef Patrick Longton at The Wishing Well has remained loyal to certain classic dishes while at the same time moving the restaurant forward from a culinary perspective.

“With The Brook Tavern we have an opportunity to create a menu from scratch – and that’s exciting,” said Bob Lee. Chef Longton’s menu features a variety of small plates meant to share, fresh seafood, a burger from a Stillwater beef producer and a small handful of items from The Wishing Well.

At The Brook Tavern they’ve installed a draft wine system, which the Lees are thrilled about. Some great producers are making their wine available in a keg format, which makes sense from both a quality and an environmental perspective. They’ve also assembled a diverse list of artisanal spirits–locally crafted ryes, for instance–and some great small batch bourbons.

The Lees look to open The Brook Tavern in April. Its website is at www.thebrooktavern.com and it is on Facebook at facebook.com/thebrooktavern.