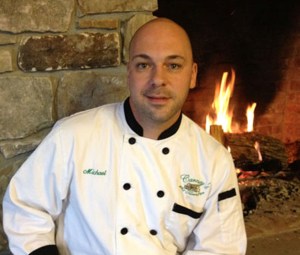 Take a building on the National Register of Historic Places, a restaurant operated there for 30 years by the same couple, and some loyal staff and customers. Throw in an award-winning chef and new ownership.

It’s a recipe for the reopening of Carney’s Tavern at 17 Main St. in Ballston Lake.

A “soft opening” was held in mid-March. Chef Michael Pallozzi, who describes Carney’s as a “hub” of Ballston Lake, was so happy to see returning customers that he even served one party when they showed up on a night when Carney’s wasn’t scheduled to be open.

Pallozzi had worked part-time at Carney’s for three years, then left for six months to pursue an internship with another area chef. Rosemary Carney had run the restaurant for 30 years with her husband, Bob. When Bob died, Rosemary decided it was time to close the doors.

Pallozzi, meanwhile, had returned to Carney’s last May. In the months before Carney’s the October closing, Pallozzi, his wife, Samantha, and Charlene Caruso had developed a plan, communicated to staff at a meeting shortly before the October closing. Carney would continue to own the building. A corporation, Pallozzi Restaurant and Management Group, with Samantha Pallozzi and Charlene Caruso, as officers, would own the restaurant/tavern business for which Michael Pallozzi would be the executive chef.

The corporation would also own a catering business, Savor Catering Company, which currently does all of its prep work offsite from Carney’s, but may eventually merge with the tavern business, acording to Pallozzi.

The Pallozzis, tavern staff, and family and friends spent the summer and fall sprucing up the tavern, refinishing floors, painting, improving a restroom, and landscaping, carefully keeping within guidelines for buildings on the Historical Register. There are still a few exterior projects yet to be completed as warmer weather approaches, Palozzi said.
The tavern, with seating for 80, has 5,000 square feet of space, and features two banquet rooms available for showers, rehearsal dinners and meeting space for community and church groups.

Pallozzi described the establishment as “rustic” and very community- and family-oriented, with an American fare menu. He plans to develop a healthy kids men, offering options of pasta with veggies, fish sticks made and breaded in-house, carrot and celery sticks to munch on, with flavored seltzers as beverage options. Burgers and fries may still be kid favorites, but this menu gives opportunities for experimentation, he said.
The tavern’s lunch menus will have pizza, sandwiches and panini available, along with longtime Carney’s favorites like turkey cobbler and fish and chips, items Pallozzi said “made this place.”

Dinner entrees can be ordered from 4-9 p.m.

Pallozzi has reduced the menu from four pages to one, pointing out that there doesn’t need to be a long list of ways in which a 14-ounce strip steak can be prepared. If the customer has a preparation preference that isn’t included on the menu, they can ask. The burger size has increased by four ounces without a price increase, he said.

The chef has invested a lot of time into “finding what fits” to meet customer demand and keep them coming back. He plans to “focus on making food top-notch. We’re not gonna cut any corners.” He said Carney’s patrons “deserve nothing but the best, whether it’s a burger or filet mignon.”

Pallozzi is the winner of two bronze medals, one for a hot plate presentation and one for a cold plate, in the 2013 Spring Classic event sponsored by the American Culinary Federation at Schenectady County Community College. He also was named one of six Rising Star Chefs at the 2013 Wine and Dine for the Arts, sponsored by the Times-Union at the Hotel Albany.

Carney’s Tavern can be reached at 952-7177. A new website being developed is at carneystavernny.com.