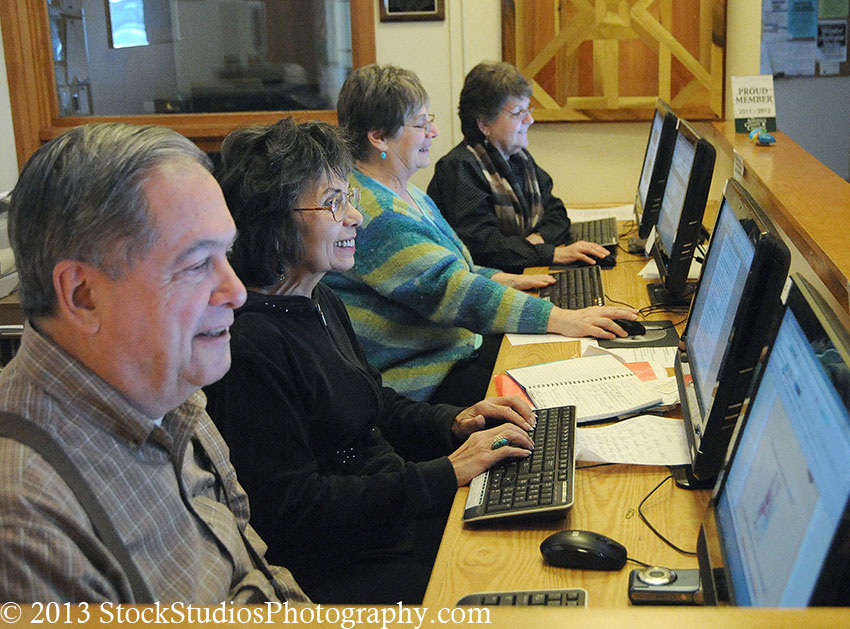 People take advantage of computers available for use at the Saratoga Springs Senior Center, 5 William St., which has numerous programs and activities for people age 50 and up

Things are humming at the Saratoga Springs
Senior Center, with between 100 and 150 people
using the center each day for classes, meals, or
just to socialize, according to Executive Director
Lois Celeste.

The center, located at 5 Williams St. in Saratoga
Springs, is open to anyone age 50 or over. There is a
$15 annual membership fee and a $10 fee for most
classes, with scholarships available.

It first opened in 1955 and moved to its current building in the 1970s. At the time, according to Celeste, “it was in total disrepair.”

Celeste has directed the center for three years. In that time, she has seen membership increase from 300 to 1,100, overseen a complete renovation of the building, and added two full-time paid staff members. Today, she said, the center boasts a new board of directors, a renovated building, new staff, new programs–and no financial debt.

The building is owned by the city. The center itself is operated as a stand-alone not-for-profit agency. It is one of several senior centers in the county, each of which is operated by an independent agency.

On a recent day in early June, 40 members had just returned from a bus trip to Montreal and another, smaller, group was off exploring Alpine lakes in Switzerland. In August, a group will head for the Pacific Northwest and, in September, another People take advantage of computers available for use at the Saratoga Springs Senior Center, 5 William St., which has numerous programs and activities for people age 50 and up. Stock Studios Photography group goes to Chicago.

Generally, there are about four trips per year. Some are arranged through travel companies. others, like a day trip to visit the 9/11 memorial in New York City, are do -it-yourself projects.

The center offers low-cost congregate dining lunches daily at the center as well as meals on wheels and, once a month, a local chef prepares a special dinner. For the dinners, students from Skidmore College or Saratoga Springs High School help out with the cooking and serving. About 100 people attended the most recent dinner, said Celeste.

On a day-to-day basis, there are exercise and wellness classes, crafts classes, informational sessions on financial and legal issues, assistance with computers and other electronic devices, and a library run by volunteers.

Donated day-old baked goods arrive three days a week from Panera, Price Chopper and the Breadbasket for members to enjoy with their coffee. There are walking groups, bridge groups, and a cadre of pool players. People drop in to use the computers or just to visit.

“The biggest thing is socialization,” Celeste said, “For many seniors without family in the area, we become their support system.”

For more serious issues, the center has an intern from Skidmore to help with housing, health care, Social Security, transportation, and other problems, often by making a referral to another community agency. In July, Celeste expects to hire an advocate/case manager.

Celeste is assisted by a full-time arts and outreach director, a full-time program director, and a part-time bookkeeper, plus a host of volunteers ranging from high school students to center members.

The telephone number for the center is 584-1621. Its website is www.saratogaseniorcenter. org.