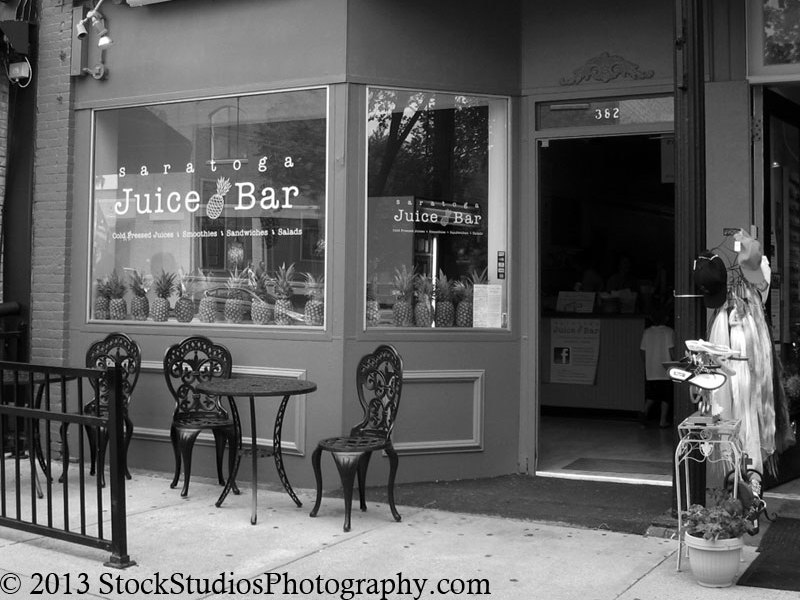 Christel and Colin MacLean, owners
of two restaurants in Saratoga Springs —
Circus Café, The Crown Grill — and Realty
Saratoga, are expanding their business
portfolio again with the opening of Saratoga
Juice Bar at 382 Broadway in July.

“Cold pressed juicing has been an evolving
trend for a couple of years now and has
hit its stride in New York City with many
operators opening multiple locations due
to high demand,” said Christel. “Colin and
I have been waiting for the perfect space
to bring this trend to Saratoga and in June
we were happy to come across an available
storefront where The Chocolate Mill was
formerly located.

“We are so excited to be the first cold
pressed juice bar in Saratoga. Saratoga
Juice Bar will allow everyone to have a
great tasting and healthy drink or meal at
any time of the day,” she said.

Saratoga Juice Bar offers a variety of cold pressed juices, smoothies (with the option of adding supplements and/or boosters), “grab and go” healthy sandwiches and salads, as well as juice cleanses.

“I am very excited to be a part of this project because not only am I passionate about nutrition and maintaining a healthy body, but this is something Saratoga doesn’t have yet and I feel honored to help bring such a wonderful up and coming trend to my hometown,” said Backus.

The MacLeans said they look forward to working with local farms including Kilpatrick Family Farm, a mainstay of the Saratoga Farmer’s Market for fresh fruits and vegetables.

“We have had a blast traveling all over Manhattan to gain inspiration and knowledge about juicing,” said Colin MacLean.

During our trips we made friends with many successful juice bar owners, managers and staff that have given us great advice and ideas. We have also hired one of the top juicers to come to Saratoga while we prepare to open and train our staff.” According to the MacLeans, cold pressed juice is widely considered to be the most nutritionally complete juice, containing three to five times more vitamins, minerals, and enzymes than juice extracted any other way.

Cold pressed juice extracts the juice hydraulically and not with a traditional centrifugal juicer which creates heat and significantly decreases the beneficial nutrients. Cold pressed juicing protects the enzymes and nutrients that are living in the juice.

The MacLeans have invested in state-of-the- art juicing equipment including the latest model of the Norwalk hydraulic press juicer.

The Saratoga Juice Bar is open seven days a week from 9 a.m. to 9 p.m. Its website is www.saratogajuicebar.com.