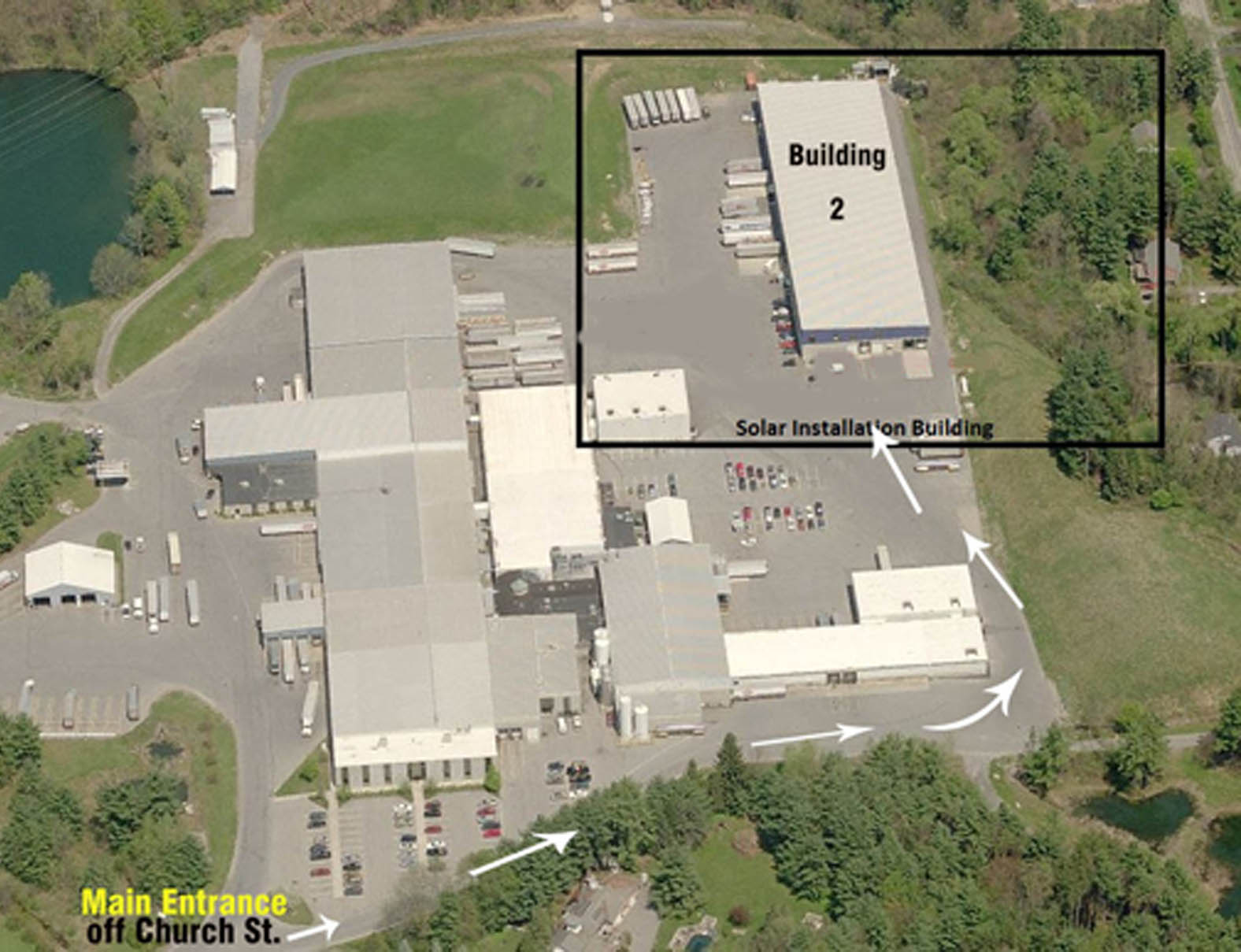 The building in the upper right at the Stewart’s Shops manufacturing plant in Greenfield, is getting a rooftop solar energy system that should be in place this fall

The 600-kilowatt photovoltaic (PV) system,
part of the state’s NY-Sun initiative,
will offset electricity from the grid used
by the Stewart’s center and is projected to
save nearly $40,000 annually in electricity
costs, company officials said.

Installation is expected to be completed
this fall, and Stewart’s expects a payback
period of 5.6 years.

“As an employee and family-owned business, Stewart’s has a strong commitment to the community, and utilizing clean renewable solar energy to power our manufacturing and distribution facility is a natural extension of that pledge,” said Nancy Trimbur, senior vice president, Stewart’s Shops. “With significant savings in energy costs annually, we can not only reduce our carbon footprint, but we can also reinvest those savings in the business and community that we serve.”

The project, which is being installed by EnterSolar, is funded in part through NYSERDA’s Competitive PV Program.

Through its participation in NY-Sun initiative, Stewart’s “is demonstrating a commitment to the state’s efforts to encourage large energy consumers to use renewable energy,” said Francis J. Murray Jr., president and CEO of NYSERDA. This type of project highlights the value that solar energy can have at manufacturing facilities where solar can help a company cut costs while taking pressure off the electric grid.”

The project was part of a $46 million award for 76 large-scale projects announced by Cuomo earlier this year. Funding per project is capped at $3 million, and all projects require co-funding to best leverage state resources.

Stewart’s is partnering with EnterSolar, a leading New York-based provider of solar systems to commercial enterprises, for this project, which is comprised of 2,405 PV modules and a ground-level inverter, officials said.

“EnterSolar is proud to support Stewart’s Shops’ community-focused values by enabling their use of solar energy” said Peyton Boswell, managing director of EnterSolar.

“Their investment in sustainable energy practices serves as a leading example for the upstate region.”

Since its inception of NY-Sun initiative, the state has had unprecedented growth in solar installations, officials said.

“We are delighted to support Stewart’s Shops in their move to put power back on to the grid,” said William Flaherty, regional director of National Grid. “Solar power is an integral part of our mission to support new, sustainable energy solutions for the future and to develop an energy system that underpins economic prosperity in the 21st century.”

“I am pleased to see a thriving business like Stewart’s help to lead the way in energy efficiency,” said Congressman Paul Tonko. “As more businesses catch on to the massive cost-saving potential that alternative energies hold, we will begin to see a healthier environment and more resources to put Americans back to work. I applaud Stewart’s for thinking outside the barrel and demonstrating why energy efficiency should be our fuel of choice.”

Stewart’s practices include an extensive recycling program for more than 4.5 million pounds of cardboard, office paper, plastic, metal, and light bulbs each year.

The integration of plant and distribution operations allows many products to be sent to shops in reusable plastic containers including totes, dairy cases, ice cream baskets and bread trays. Stewart’s offers reusable coffee mugs and cups made from paper. A transition to LED lighting in new and remodeled shops is also part of the plan.