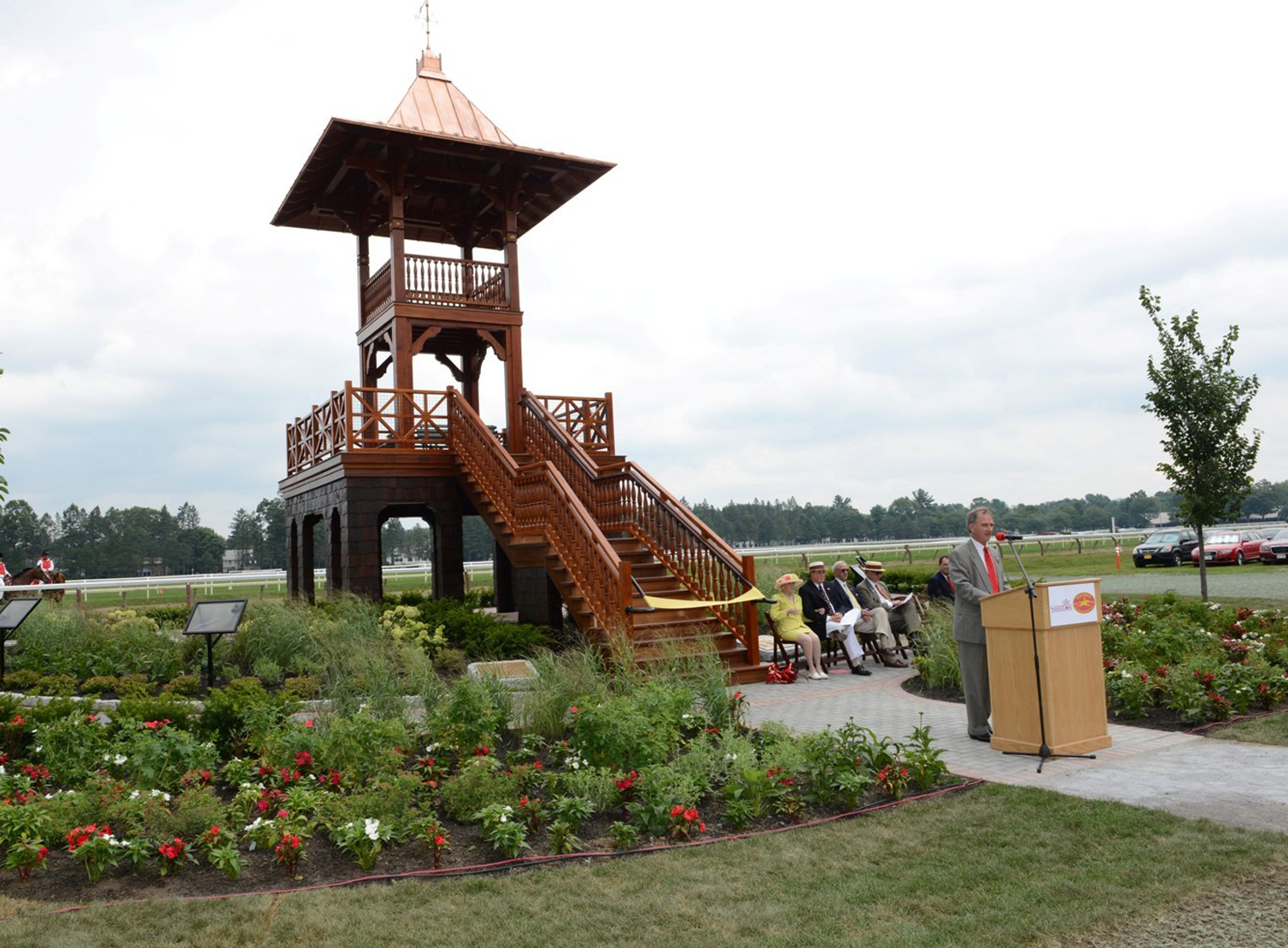 NYRA President Christoper Kay speaks at the unveiling of the Whitney Viewing Stand, overlooking the Oklahoma Training Track, across from Saratoga Race Course

The New York Racing Association, Inc. (NYRA) and the Saratoga 150 Committee
unveiled on Aug. 1 a new landmark designed
to reinstate public access to the Oklahoma
Training Track as well as to celebrate the
legacy of one of Saratoga’s most philanthropic
families.

Overlooking the Oklahoma Training
Track, the Whitney Viewing Stand offers the
public the opportunity to view the morning
workouts at Oklahoma for the first time in
more than a decade with an unprecedented
vantage point to experience the training
ritual. The viewing stand is named in
honor of one of thoroughbred racing’s most
prominent families and dedicated patrons,
the Whitneys.

“As we celebrate 150 years of racing in Saratoga, it is impossible to ignore the site of the meet, located at Horse Haven just yards from where we stand, that started it all back in 1863. The Whitney Viewing Stand is the ideal vehicle to showcase this historic piece of Saratoga,” said Wait. “The Whitney Viewing Stand serves as a permanent landmark to commemorate the 150th anniversary season and the contributions of the Whitney family to Saratoga for more than a century.”

William “W.C.” Whitney is widely credited for revitalizing Saratoga Race Course with his purchase of the racetrack in 1901. He later went on to acquire the land which today is known as Oklahoma, across from the main track on Union Avenue.

The viewing stand was formally open to on Aug. 3, which marks the 150th anniversary of the four-day race meet in 1863 near the site of the Oklahoma Training Track (the meet moved across the street to the main track one year later, in 1864).

“The ritual of watching the morning workouts is a longstanding tradition at Saratoga, which still rings true each morning on our main track. NYRA is proud to welcome the public back to the historic Oklahoma Training Track for a behind-the- scenes look at the work that goes into training Saratoga’s world-class thoroughbreds,” said Kay.

“The Whitney Viewing Stand will undoubtedly become a must-visit location for both the patrons who visit Saratoga each year and locals alike.”

W.C. Whitney served as president of the Saratoga Association at the turn of the century beginning in 1901, oversaw a variety of improvements to the property, including enlarging the main track to a mile and an eighth, expanding the grandstand and clubhouse and erecting a new saddling shed behind the clubhouse.

Additionally, in 1902, Whitney purchased a substantial tract of land stretching east of East Avenue and to the north of Horse Haven, which became known as Oklahoma, where today’s training track sits.

The family dedication to the industry continued with Cornelius Vanderbilt “C.V.” Whitney and his wife, Marylou. Following C.V.’s death in 1992, Marylou has continued the Whitney tradition of horse racing. She bred and raced Belmont Stakes, Travers and Kentucky oaks winners. She was honored in 2010 with an Eclipse Award and was elected to the Jockey Club in 2011.

“The Viewing Stand is a truly fitting tribute to the contributions of W.C. Whitney and the Whitney family,” said Mrs. Whitney. “It has been an honor to carry on the Whitney family tradition of philanthropy and racing here in the city that hosts the best race meet in the world. It is a privilege to live in Saratoga.”

The Whitney Viewing Stand is designed to model the original 1892 judges stand, which stood before the grandstand. The timber-framed, three-story building is set upon a newly landscaped section of the grounds and has a steeply-pitched roof capped by a weather vane finial.

It is flanked by two plaques – an original plaque that has been refurbished from the Saratoga Race Course centennial celebration in 1963 and a new plaque honoring this year’s sesquicentennial.

The stand is open daily during morning training at Oklahoma for the remainder of the 2013 meet. The public can access it from the East Avenue gate of the Oklahoma Training Track where free parking is available.