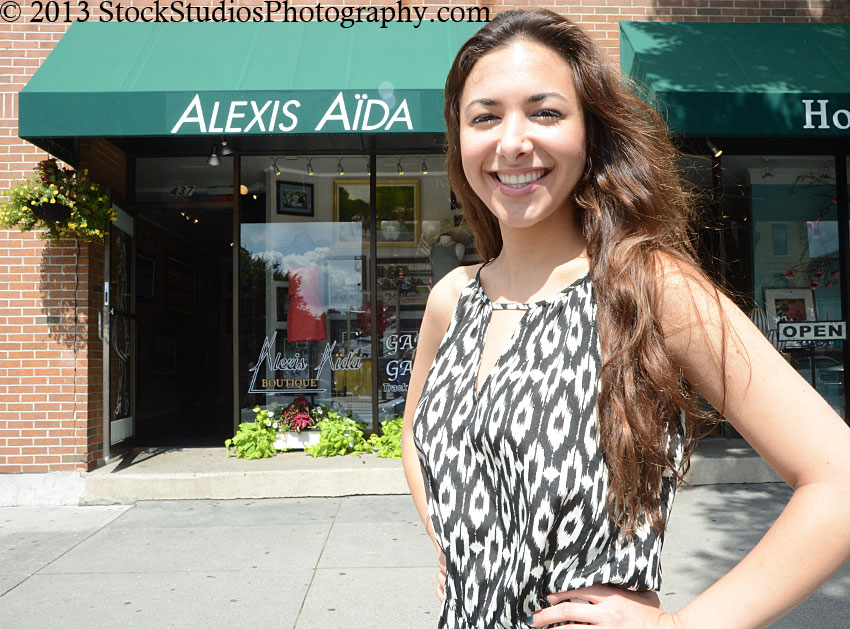 Alexis Gabriel wants younger women to
dress older and older women to dress younger
with the “classic modern” clothing she sells
at the newly opened Alexis Aida Boutique at
437 Broadway in Saratoga Springs.

Gabriel is a design school graduate and
former buyer who has sold accessories such
as jewelry, hats, purses and scarves at her
father’s booth at Saratoga Race Course
during racing season. Now her father,
well-known equine artist Richard Gabriel,
shares the boutique’s storefront space to
display his paintings – and hers, which are
“integrated with the merchandise on every
wall,” she said.

“Classic modern style is taking something traditional like a little black dress and getting a little quirky with it, like adding a cutout or an interesting neckline,” said Gabriel. She carries labels that appeal to 18 to 50-year-olds. With the assistance of her mother, who is Gabriel’s business manager, she has brought in clothing to span several generations.

“There are clothes that my mother would like and that I would like,” she said. “We have a modest length with a younger feel for older clients.”

Soon Gabriel will introduce her own line of clothing, featuring hand-painted textiles. “I design, sew and then paint the clothing,” she said. “Since grade school I wanted my own store and my own line of clothes.” The space on Broadway is narrow but deep and has a “New York City loft feel to it,” she said. “My idea was to keep the old look of Saratoga but mix with the new.”

Gabriel was pleased to have uncovered some vintage hanging light fixtures during the store’s remodeling.

“The lights are original to the building and are shaped like hats,” she said. “I took them down and sanded them and painted them yellow and gray,” her signature colors. The lighting helps further elongate the space.

In her front window now, visitors can view an original high-low, extravagant avante garde dress in butter yellow and light gray. While she put this dress in the window for the opening, Gabriel said she is featuring mostly tops during her launch. Over time she will replace some clothing lines with others and bring in her own designs.

Gabriel said she was very busy during track season and plans a grand opening after it ends.

Most of Gabriel’s initial marketing is through social media and she will ultimately advertise in magazines. Gabriel’s logo is a likeness of her. She said her brother, a photographer, took a picture of her and from that she stylized the logo now in use.

More information is available on the boutique’s Facebook page.