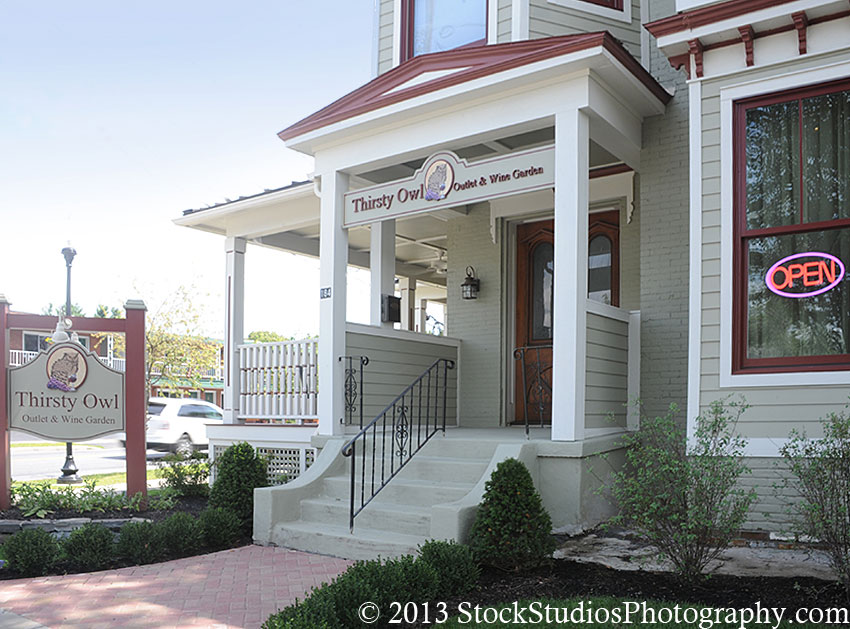 Owner Ted Cupp and his son, general
manager Josh Cupp, opened the doors of
the Thirsty Owl Outlet and Wine Garden
in March at the historic 1880s building on
the corner of South Broadway and Lincoln
Street in Saratoga Springs.

It took a year and a half from purchasing
the former bed and breakfast to launch
what Josh Cupp calls a “hybrid tasting room
and wine bar.” The wine room and outdoor
seating are completely housed in the
1,600-square-foot Victorian style addition
now gracing Broadway.

The offerings of Thirsty Owl Saratoga at
184 Broadway were complete with the opening
of the Bistro in the last week of July.

The Thirsty Owl Wine Co. on Cayuga Lake, with the new sales outlet, bistro, gift shop and wine tasting establishment in Saratoga, is the latest venture for the Cupps. According to son Josh, his father took the family from Toledo, Ohio, to western New York in the 1970s, when he purchased the Rome Country Club. He subsequently sold the golf course to another son, Wes Cupp, when his entrepreneurial spirit changed tack once again.

“In 2000 my Dad, who up to that point was a Jack Daniels guy, was walking around Australia,” said Josh. “That trip and a later visit to New Zealand helped him appreciate the intricacies of tasting and growing wine. Seeing how fun and complex and potentially profitable a winery could be, my father purchased an existing small vineyard with 2,000 feet of frontage on scenic Cayuga Lake.” Cupp said this venture became a retirement theme for his father and that his brother, co-owner Jon Cupp, runs the operation in western New York.

In 2002, the first year of production, the Thirsty Owl Wine Co. made some 1,500 cases of four types of wine. The business now produces 20,000 cases annually, most types of which are available at the Saratoga facility for tasting to enjoy by the glass or to purchase by the bottle or the case.

“Our name implies fun, but at the same time we have an excellent, award-winning product,” said Josh Cupp.

Visitors to the wine room can taste five varietals of choice for only $5, Cupp said, and when purchasing by the glass get “a generous six-ounce pour.” Every day there is a different wine featured. There are also three local craft beers on tap.

Having the bistro attached to the wine garden follows the model of the Cayuga Lake operation.

“It makes sense when you are tasting wine to have something to nibble on,” Cupp said. “But most wineries around Cayuga Lake do not have a restaurant as we do.”

The bistro opened to the public only weeks ago with executive chef Heather White managing the kitchen. White comes to Thirsty Owl by way of eating establishments in Albany and New York City, Cupp said.

“We feature small plates and limited entrees, yet there is a diversified menu at the Bistro,” he said.

Choosing Saratoga Springs for the winery’s first, and perhaps only, satellite business was an easy choice to make, according to Cupp.

“My father has been interested in harness horses since locating to Rome,” said Cupp. “He has even owned a racehorse named Teeth of the Dog. But we like it here the other 46 weeks of the year and feel at home with the local people,” he said. “As a family, every investment we have made has been for the local following.”

Call Thirsty Owl Outlet and Wine Garden for hours of operation and more information at 587-9694.