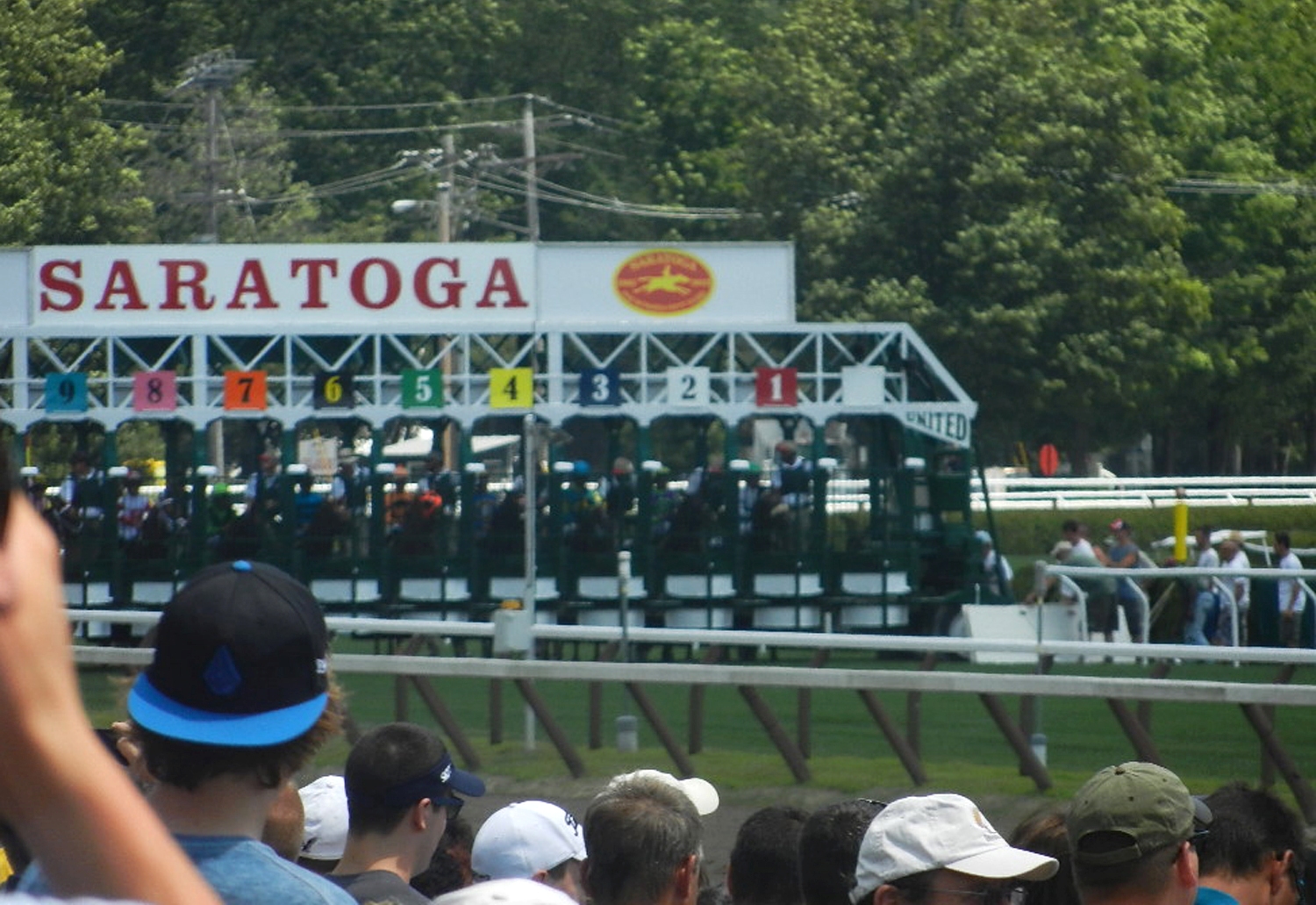 Horses bolt out of the starting gate during the 150th anniversary season at Saratoga Race Course, a season that broke records for revenue going into city and county coffers

The 2013 thoroughbred horse racing season
– the 150th at the historic Saratoga Race Course
– was a record-breaking economic boon for the city
of Saratoga Springs and Saratoga County, officials
boasted at a news conference last month.

But officials were quick to point out that while
the race track and Saratoga Performing Arts Center
are key cogs in bringing people into the area
during the summer, tourism is strong all seasons
of the year and efforts are constantly ongoing to
strengthen tourism through diversity of events
and promotions.

At the downtown Saratoga Springs City Center, officials reported that Saratoga County netted $327,034 for its general fund from occupancy taxes levied on room reservations during the period from June 1 to Aug. 31, an all-time record.

It marked a 3.5 percent increase over the corresponding quarter from the previous year.

Saratoga County receives 1 percent of revenue from all taxable room reservations which reached a record-high of $32,703,401 during the summer of the 150th anniversary celebration at Saratoga Race Course, said Saratoga County Chamber of Commerce President Todd Shimkus.

The figures “demonstrate that the lure of Saratoga County is stronger than ever, said Matthew Veitch, a Saratoga Springs county supervisor and chairman of the Saratoga Board of Supervisors’ Racing Committee.

Dating back to 2009, the last year when Saratoga ran a 36-day meet before increasing its length to 40 days, county revenue has increased by 32 percent while the city of Saratoga Springs has benefitted from a 27 percent increase.

Veitch said the numbers “validate the demand for thoroughbred racing in Saratoga Springs and is a testament to the strength and vitality of Saratoga Race Course.”

Veitch was among those, including Shimkus and Todd Garafano, president of the Saratoga Convention and Tourism Bureau, who said the successes in tourism are also due to the many signature attractions like SPAC, Saratoga Spa State Park, Saratoga Casino and Raceway, museums, cultural attractions, and a vibrant downtown with many shops and restaurants.

“The addition of the one weekend at the start of the racing season has really paid dividends for the city and county,” said Shimkus. “This summer saw the continuation of a strong surge in tourism across the board in both July and August and reflect a sustained interest in and demand for the racing product offered at Saratoga Race Course.

Thanks to the efforts of The New York Racing Association, visitors now have more options to sample and enjoy all that Saratoga has to offer and are responding by traveling to our city in record numbers throughout the entire summer season.”

Garafano said the city and county has “great success with groups this summer. Sunday through Wednesday gives us the best opportunity to find good hotel room availability and rates and we market Saratoga as such. Overall we worked with 23 groups, representing 3,468 room nights in 2013 compared to 11 groups and 2,198 room nights in 2012.”

The racing season, noted Garafano, allows he city and county to be showcased, leading to future business all year round.

Mark Baker, City Center president, called it “an excellent season and a benchmark for Saratoga Springs. We were able to do some things that continue to enhance our product.”

Strong demand also helped spur higher pricing. Hoteliers were able to charge more during the 150th anniversary season, with nightly room rates in the city of Saratoga Springs averaging $252.46 in August 2013, a 7.3 percent increase over the previous August, and $191.34 in July 2013, a 5.5 percent increase over July 2012.

Regarding an influx of new hotels currently under construction, Garafano said he anticipates it will help the tourism dollars grow. He said most have meeting rooms and other amenities the business community values, so it makes them desirable from a marketing standpoint.

“I feel pretty confident we’ll fill those,” he said. “We’ll just have to work a little harder.”

“We could not be happier with the results of our efforts in promoting a region and an industry so critical to our economic well-being,” said Saratoga 150 Committee Chairman Charles Wait. He added that “we’re going to take some of the elements of Saratoga 150 and make sure they continue for a long time.”

Among those will be the Saratoga 150 website, which will stay as a strong information site for racing fans.

Baker said some of the revenues from the track each year go back into improving the City Center, which is a key drawing conferences and other events every year, that bring in more tourism dollars. Funds from past years help pay for the center’s recent expansion and improvement project. On the horizon is a parking garage.

He said Saratoga has “a year-round vibrant, alive culture where people want to be.” He has been busy signing contracts with entities to use the city center through to 2018 and 2019, “because they want to be here.”

Baker said plans are to “nurture, grow it and safeguard what Saratoga has to offer. It will grow and get better and better.”