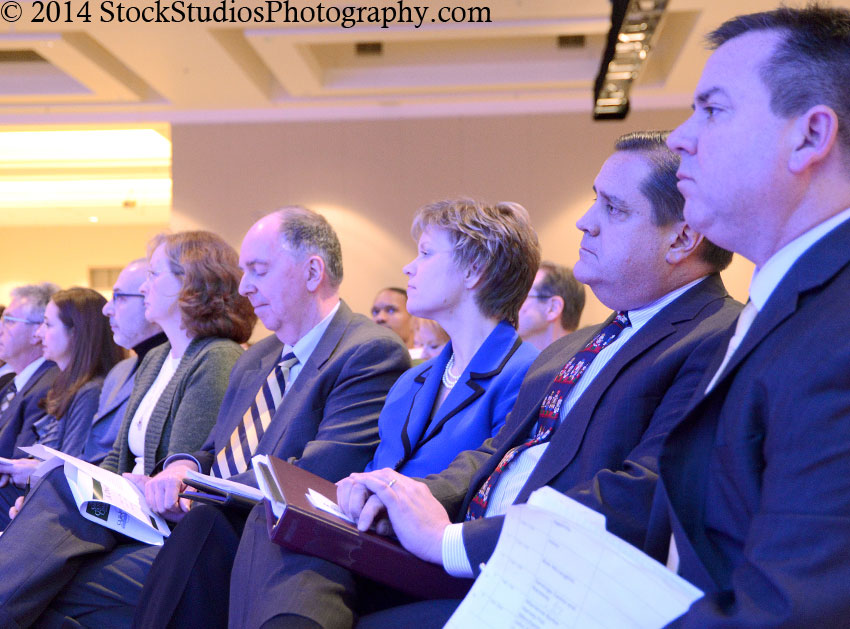 Local business people, staff of Saratoga Casino & Raceway and tourism representatives await the start of a fact-finding meeting on a proposed new casino in Saratoga Springs.

Officials from Saratoga Casino and Raceway, the only known applicant for the siting of a casino in Saratoga County, stated outright that “a Las Vegas-style casino has no place in our community” and that keeping up the across-the-board strength of tourism in Saratoga Springs and the county is paramount to everyone’s success.

They spoke at a fact-finding meeting on the subject at City Center, sponsored by the Saratoga County Chamber of Commerce and the Saratoga Convention and Tourism Bureau.

As stated by moderator Matt Jones, a Saratoga Springs attorney, the session was not a debate, but a means to get knowledge about the site selection process and how it could impact the local community.

Several members of the business community who could potentially see adverse impact from competing with a casino – restaurants, hotels, downtown shops, performance venues, horse racing interests among them – had the chance to voice their concerns and ask questions of the Casino & Raceway officials.

Estimates put the crowd attendance at over 1,000 people. The audience was dotted with groups of people attired in red shirts that sported “casino” across the back, emblematic of the SAVE Saratoga opposition group (Saratogians Against Vegas-Style Expansion). The most oft-repeated phrase of the session was “partnership,” with people from the business community expressing the sentiment that they hoped a casino and its expected large revenue stream would work to spread tourism business into the city and county, and not keep it self-contained.

Marcia White, executive director of the Saratoga Performing Arts Center, noted that SPAC and other arts and performance venues are already working with the governor’s office, through the group Upstate Theater Coalition for a Fair Game. Casinos in other places have larger venues, and can offer low ticket prices because of their vast resources. Also, some have exclusivity clauses with the talent.

She said the coalition is looking into having the casino enter into agreements with the venues that would do things like limit the number of seats in a casino performance center and deal with ticket pricing.

“We’re not anti-gambling. We are not anti-casino,” she said. “We just want a level playing field… We value anyone who brings economic vitality to the area.”

Restaurateurs like John Baker of Gaffneys and Colleen O’Bryan Holmes of Wheatfields Restaurant said there is a feeling of uncertainty because casinos can run throughout the night, offer free drinks and serve discounted, even free, meals.

Baker said there is already a push to close Saratoga Springs bars earlier than 4 a.m. An all night casino would have “a tremendous negative impact on our business.” Baker asked that if bars had to close at 1 a.m., would the casino. Cox said “yes”, to audience applause.

Holmes said the downtown community works together, supports one anther, and is asking the same of the casino.

Cox repeated at several junctures that, while the state still has not released all the specifics of what it will require the casino to contain, the strength of Saratoga’s downtown is vital to the success of a casino. She said the Casino & Raceway is willing to discuss concerns and develop partnerships so that Saratoga remains a vital community.

“Our success is directly tied to the success of Saratoga,” said Cox.

Carlson called Saratoga a “world class destination. We promote that. We always have. We always will.”

“Our employees are part of this community,” said Carlson, that work, dine, shop and live in the area. “An Expanded casino is the best outcome for this community.”

“There’s a lot of competition for discretionary dollars in the northeast,” said Cox. It’s in the best interest of the casino to have a vital Saratoga Springs “because that’s what brings people back.”

Carlson added, “Going forward, we’re going to be great community partner. “Saratoga is a gem … We would never do anything that take away things that make Saratoga so great.”

Cindy Hollowood, general manager of the Holiday Inn Saratoga Spring, said business people in her industry held a meeting to develop concerns, like the size of the new hotel that will be attached to a casino. And the size of its multi-purpose hall that could compete with Saratoga City Center.

Conventions at the center, which has experienced solid success, are important to all downtown businesses.

Still, said Brian Straughter, vice president of Turf Hotels, including the Hampton Inn in Saratoga Springs, “we’d probably rather have [a casino] here rather than having to compete against it” if it ends up in a place like Albany or Rensselaer County.

The Raceway & Casino officials said in places like Atlantic City and Las Vegas, rooms are discounted because there are many casinos concentrated in a small area and competition among them is fierce. Not so in Saratoga, where the rooms will be riced in line with he community.

Mark Baker, president of the Saratoga Springs City Center Authority, was concerned with the size of the multi-purpose event center to be built at the casino.

“I do not feel its needed to support gaming tables and would put much of what we have at risk,” he said. He also said he’s concerned about what will happen if the casino lands in a place like Albany, which is already about to build a large convention center that could compete for events with Saratoga.

Michael (Mickey) McGivern, a member of the executive committee of the Saratoga Harness Horseman’s Association, said his industry “was on the verge of extinction 10 years ago,” but has made big strides in recent years. Business would see a significant dropoff if a casino is awarded to another area. People in the harness industry, he said, live, shop and spend dollars in Saratoga County, and the economic impact is “under recognized.”

Joe McMahon, managing partners of McMahon of Saratoga Thoroughbreds, LLC, in Saratoga Springs, urged partnerships with the casino group. Thoroughbred owners are worried about how gambling during the track season will impact business, but is willing to partner with the casino for the best interest of both.