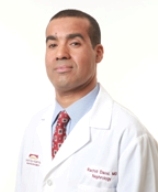 The medical staff of Saratoga Hospital
presented its Community Service Award
to Dr. Rachid Daoui in recognition of his
exceptional patient care and quality.

Daoui, a nephrologist, has been a member
of the Saratoga Hospital medical staff
since 2003. Hospital officials said he is
among the hospital’s most respected physicians
and admired by patients, staff and
colleagues.

“His knowledge and expertise in the
field of nephrology is outstanding,” said
Dr. Renee Rodriguez-Goodemote. “We are
privileged to have him as our colleague and
thankful to have him available for the care
of our patients.”

Goodemote, who is medical director of the Saratoga Community Health Center, presented the award at the recent annual Doctors’ Day celebration. She praised Daoui for his gracious and caring manner, and his exceptional character that pervades every aspect of his daily interactions with staff and patients.