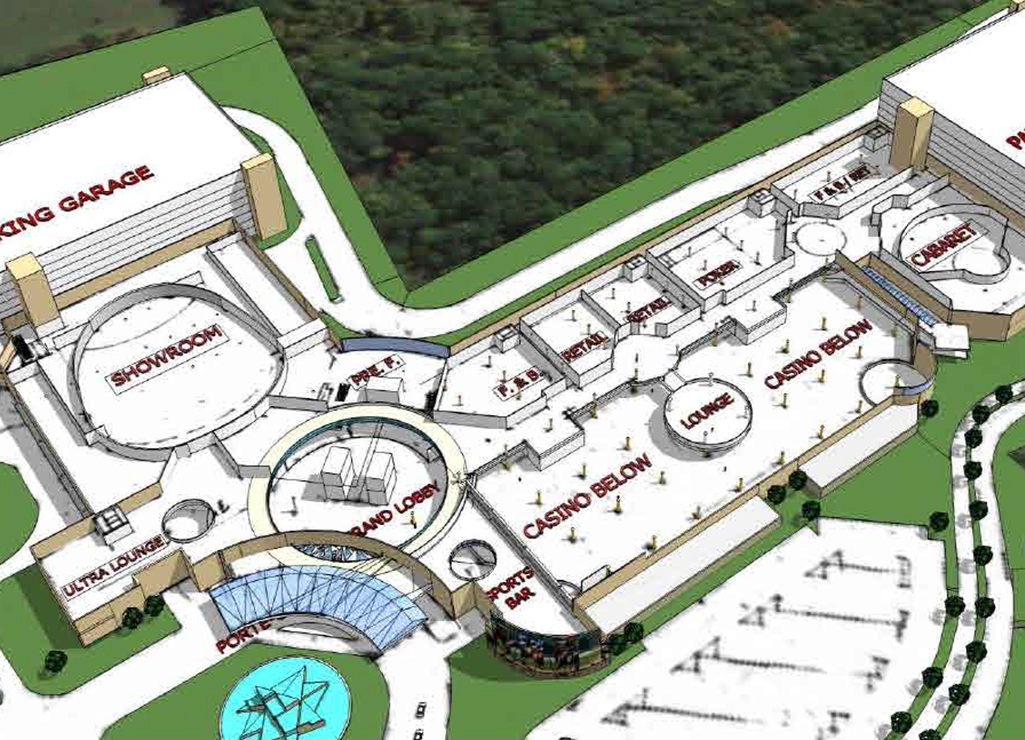 This is a rendition of a $300 million casino that Saratoga Casino and Raceway hopes to build on Thompson Hill in East Greenbush, Rensselaer County, if it can win state approval

Saratoga Casino and Raceway has dropped
the idea of a full-fledged casino, with table
games like black jack and roulette, in Saratoga
Springs.

The local group, whose parent company name
is Saratoga Harness Racing LLC, instead decided
to go for two of the four casinos to be built
over the next couple of years in New York state.
One is at a site on Thompson Hill in East
Greenbush, Rensselaer County. The other is
farther south in Newburgh, not far from the
Thruway.

Saratoga Casino and Raceway is one of the 21
entities that submitted proposals to the state.
Each applicant paid a required $1 million application
fee.

Saratoga Casino and Raceway is the only one to put themselves in the running for two casinos in two of the three areas the state has targeted for new casinos.

The four new casinos will be allowed in three regions: the Saratoga-Albany region; (where the East Greenbush site is located) the Catskills and the Hudson Valley, which includes Orange, Sullivan and ulster Counties (where the Newburgh site is located); and a region in central New York, running from Binghamton north to the Canadian border.

Rita Cox, senior vice president of marketing and external affairs at Saratoga Casino and Raceway, said one proposal is not a fall back position against the other. The goal is to have two winning proposals.

“Absolutely. We would not have rolled out both and put $23 million on the table if we didn’t think we would have the best possible proposals and be able to do the best possible job,” she said. The company called the proposed facilities “world-class.”

The group is also going to be busy locally, following through with the expansion of its Saratoga facility that officials announced last year. That $30 million project includes a 120- room hotel with guest spa, indoor pool and lobby bar, a 24,000 square-foot, multi-purpose event center, and a fine dining restaurant.

Cox said the group is awaiting final approval from the state Office of General Services before shovels go in the ground.

The city of Saratoga, which showed opposition to bringing a full-fledged casino to the area, is concerned about having control over aspects of the expansion. But the state is the lead agency.

If Saratoga Casino and Raceway is successful in winning one or both of its downstate bids, there will be some synergies with the Saratoga site. “That’s actually one of the strong points of our bid, that it could work together” in terms of things like employment and amenities for customers, she said.

“We have a great team assembled and we’re very ready and able” to put their ideas to work and run successful casinos, she said.

Final applications are due to the state no later than June 30. Announcement of the successful bidders will be in the fall.

In the Capital Region, there is competition from another site in Albany, one near Howes Caves in Schoharie and one near the city of Amsterdam. There is more competition in the Catskills and southward, including Caesars entertainment, which operates 53 casinos worldwide.

The bid in the Capital District includes a 100,000-square-foot facility will be dubbed the Casino at East Greenbush.

The estimated $300 million development will be an economic revival for the region, creating approximately 1,700 construction and 1,700 permanent “good paying jobs with benefits,” in addition to thousands of additional jobs in the community and region, company officials said.

Offering seamless access from I-90, “the casino will keep New York state gaming dollars within the state – instead of losing them to a proposed casino in Springfield, Mass. – and will draw Massachusetts residents to New York for its many recreational and tourism offerings,” officials said in a news release.

The project “will truly reinvigorate the region, making it an exciting destination for visitors from near and far.”

“The casino at East Greenbush is an absolute game changer for the Capital Region’s economy and will become one of New York’s premier destination spots for years to come,” said Cox. “We have a team in place that has deep roots and the most experience in the Capital Region. And this project is situated on the best site to showcase the natural beauty and history of the Hudson River and Albany skyline.”

Officials said its locally based team of owners has “a proven track record and decades of gaming experience, the Casino at East Greenbush will be the best project for the Capital Region’s long-term prosperity. ”

Officials said the Casino at East Greenbush will feature gaming, dining and entertainment options, including:

In Newburgh, the project is set for land at the intersection of Interstate 84 and the Thruway. The proposal calls for a $670 million, 890,000-square-foot project on a 70-acre site. It would include a 500-room resort-style hotel and spa, a 150,000-square-feet gaming space, 20,000 square feet of high-end retail stores, restaurants ranging from fast food to fine dining, entertainment venues, rentable conference halls and a multi-tier enclosed parking structure with valet parking.