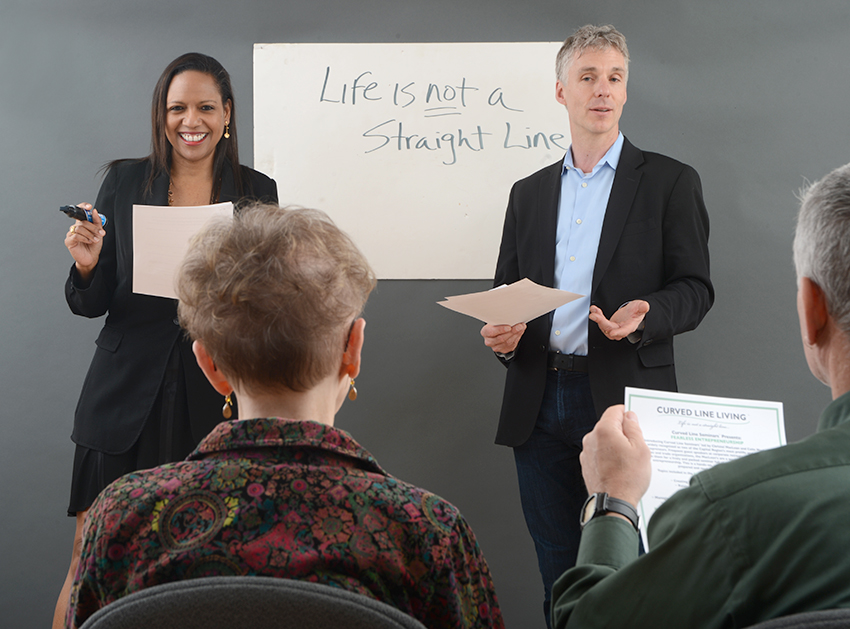 ©StockStudiosPhotography.com Christel MacLean, left, and her husband, Colin MacLean started a new business in which they present seminars on entrepreneurship and personal development.

“There are many ways to get from point A
to point B and a straight line isn’t always the
best way,” according to Christel MacLean, the
owner, along with her husband, Colin MacLean,
of Curved Line Living seminars in Saratoga
Springs.

Drawing on their own circuitous routes to
business success, the MacLeans, with Curved
Line Living, present seminars on entrepreneurship
and personal development.
They are also restaurateurs in Saratoga
Springs, owning three businesses on Broadway.

The company, an offshoot of some 15 years
of management consulting, including public
speaking and seminars, offers seminars for
business people at different stages of their
careers. An April seminar at Skidmore College
included discussion of how to develop a concept,
raising capital, deciding on a corporate
structure, and time management, as well as
“Strategies for Success,” their “proprietary tips
for entrepreneurial success.”

When they develop their seminars, both partners discuss concept development, taking a concept to market, branding, networking, and developing a business plan. Colin then deals with the financial side of things: raising money, analyzing numbers, and the like, while Christel concentrates on marketing, public relations, and how to create the proper mind set.

Upcoming seminars, in May and June, will include new business development, managing growth, and social aspects of business.

“Principles of Curved Line Living” promises an interactive discussion of such “key principles” as reinvention, positivity and following your intuition.

For the more practical minded, the MacLeans plan a “technology retreat,” where participants get hands-on experience with social media and some of the latest electronic gadgets.

“So many of our peers are tech savvy in some areas but not in others,” Christel said, and this will be a chance to fill in some of the gaps.

Owners of several Saratoga restaurants, a management consulting firm, and Realty Saratoga, the MacLeans have lived what they call “the entrepreneurial lifestyle” since coming to Saratoga Springs in the 1990’s. Their first venture was Hattie’s Restaurant, which they purchased from founder Hattie Gray in 1993 and owned and operated until 2001. Christel recounts that she met Hattie in Saratoga Springs, when the couple lived in New York City where Christel was an investment banker and Colin was a theatrical producer.

“She said, ‘You’ve got to buy my restaurant,'” Christel recalled. They checked things out, purchased the restaurant, moved to Saratoga Springs, and, at about the same time, began a real estate business, Realty Saratoga. After selling Hattie’s, the MacLeans returned to New York City for a couple of years before returning permanently to Saratoga Springs and a flurry of restaurant ownership, real estate, and management consulting.

Their Circus Cafe celebrated its 10th anniversary on May 1 with cotton candy and magic tricks. Its neighbor on Broadway, the Crown Grill, marked its first anniversary the same day, with bourbon and martini samples, free hors d’oeuvres, and live music. Both are located at 392 Broadway, also the site of the Curved Line Living offices.

Meanwhile, they developed the Saratoga Juice Bar at 382 Broadway. The shop sells cold pressed juices and healthy snacks. “We work a lot … we divide and conquer,” said Christel.

Colin MacLean is originally from Montreal. He spent 12 years as a theater producer, raising money and developing concepts. None of his shows made it to Broadway but at least one, a musical based on the life of Rita Hayworth, had a good run off-Broadway.

Christel grew up in New York City. She graduated from Williams College with a major in political science and then spent six months as an intern with the Joffrey Ballet in New York City. Getting down to business, she spent two years as a financial analyst at Goldman Sachs, got an MBA at the Wharton School at the University of Pennsylvania, and returned to New York for eight years as an investment banker, first at Solomon Brothers and then at AIG, and some time at the Parsons School of Design. “Then, I met Hattie,” she noted.

Information about Curved Living Seminars is available on the Internet at seminars@curvedlineliving.com or by telephone at 369-8922.