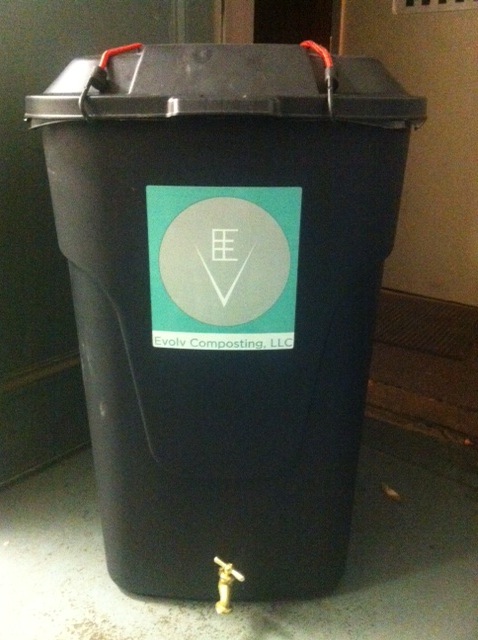 This container developed by Evolv Composting is used by area restaurants

Two young entrepreneurs are scouting
Saratoga County for land on which to compost
their customers’ food waste.
John Manning, CEO of Saratoga Springs based
Evolv Composting, said the lack of land
is the main inhibitor to the company’s growth.
The property it has been using will not be
available as of the end of August.

“Once we have our new location, we will be
able to expand exponentially,” said Manning,
a 24 year-old graduate of Skidmore College.
Manning and his partner Brad Cray, a
22-year-old Skidmore student who graduates
in 2015, incorporated Evolv in January.

The
company provides homeowners and restaurateurs
with an easy way to practice a form of
anaerobic composting called Bokashi. With
Bokashi, all kinds of food scraps–including
the meat and dairy left out in most traditional,
aerobic methods–may be composted, thereby
eliminating the greenhouse gasses that result
when those scraps end up in landfills.

Evolv provides customers with airtight bins
and wheat bran inoculated with lactobacteria,
which jump-starts the breakdown of food
without creating methane. The full bins are
periodically swapped for new ones. Once the
collected compost has fermented completely,
it will be sold for use in gardens.

“I want to get composting into every household
and every restaurant,” Manning said.
“There is no need to produce chemical fertilizers
when all the nutrients we need are right
there in the trash. I would love to see Evolv, in
the next year or two, be fully Capital District wide,
handling as much of the region’s organic
waste as we can.”

Evolv grew out of a class project at Skidmore.
The assignment, given by Professor Catherine
Hill, was to develop a business plan for a mock
company. Manning and Cray, who will graduate
in 2015, based their plan on the composting
system Manning’s parents used when he was
a boy in Connecticut.

Hill encouraged them to turn their plan
into an actual business. She also recommended
they enter the New York Business Plan
competition, a statewide contest for student
entrepreneurs. The company was a semifinalist
in the energy/sustainability category in the
regional round and was named Rookie of the
Year, in the same category, in the state finals.
“That was a big confidence booster,” Manning
said.

At the same time, Evolv was testing its
system at Comfort Kitchen, a Saratoga Springs
restaurant where Manning worked as a cook.
It then began signing up residences in the city.

Customers can purchase a bin and wheat
bran outright, at a cost of $40 for homes and
$70 for restaurants. But most opt to enter into
a subscription service with a scheduled bin
swap. This service allows the environmentally
conscious to compost without having to deal
with the waste itself. Those who want some of
their compost back, to use in their own garden,
will be able to obtain it once it has completed
the fermentation process.

Either way, the system is designed to make
composting user friendly. The bins, which
contain no bags or liners, fit neatly under
the kitchen sink. Manning said the only odor
produced is a “vinegary, yeasty smell” that is
kept within the airtight bin.

“I think taking away that ‘ick’ factor helps
break down the barrier and lets people get into
composting easier,” he said.

Evolv currently purchases its bins from
a company that does its manufacturing in
China, but that is going to change. Manning said an engineer is designing a bin specifically
for Evolv, and the partners are looking
for a domestic manufacturer to produce it in
recycled plastic.

In order to finance this endeavor, Evolv
plans to produce a video for the crowdfunding
site Indiegogo. The partners also will
be making a pitch to some seed investors.
They already are working with mentors from
Cleantech Open, the largest clean technology
accelerator in the country.

At the moment, Manning and Cray, who has
the title of chief operating officer, are the only
full-time employees, although they consider
their advisors–including Skidmore’s Hill and
Mike Shimazu, an associate vice president at
the University at Albany, as part of their team.

Manning said the company is adding residential
customers every week, and has signed
on a few more restaurants. However, it is
containing its growth until it finds new land
to do its composting on.

“Right now we are trying to limit the number
of restaurants we take because we can’t get
inundated with too much compost,” he said.
Once Evolv has a sufficient inventory of
completed compost, it will sell it through area
garden centers, return a portion to customers,
and use the rest as part of an education
program.

Starting this fall, Manning and Cray will be
teaching third graders in the Latham School
District about gardening, composting, and why
it is important for society to move away from
putting greenhouse-gas producing food waste
in landfills.

“Education of kids could be the biggest
factor for actually transitioning people over
to mass composting,” Manning said. “A lot of
adults are stuck in their ways. But kids are
willing to learn, and if they grow up composting
they are so much more likely to continue
it as an adult.”