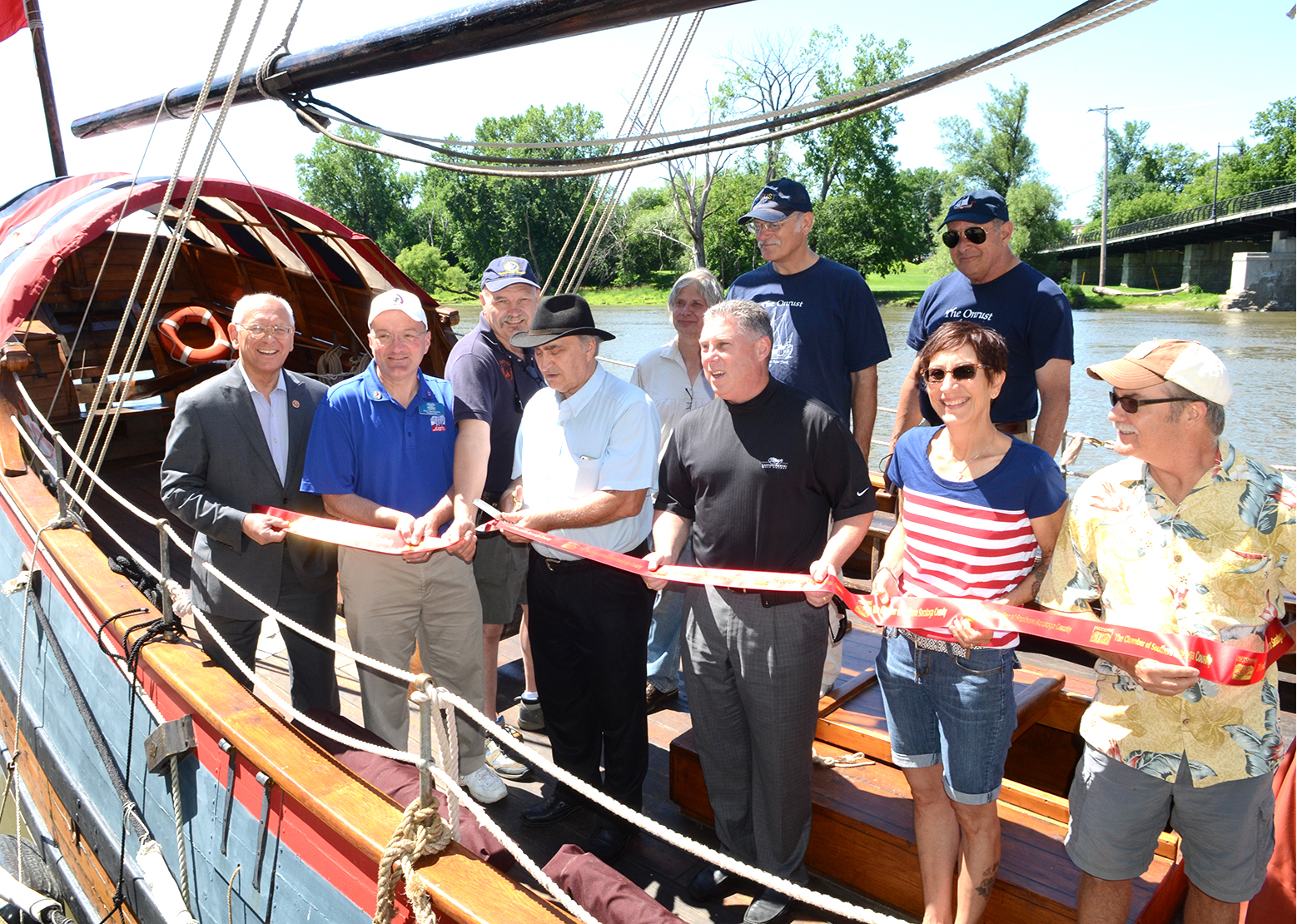 Officials cut the ribbon on the ‘Onrust,’ a replica of the first commercial vessel constructed in New York state, at an event celebrating the 1614 maiden voyage of its namesake

On Saturday, July 5, the Chamber of
Southern Saratoga County welcomed its
newest member with a bang – literally –
as the Onrust, a replica of the first commercial
vessel constructed in New York
state, fired its cannon and cut the ribbon
celebrating the 400th anniversary of the
1614 maiden voyage of its namesake.

The original Onrust was a fur trading
vessel built in New York by Dutch
navigator Adriaen Block to replace one
destroyed by fire the previous winter. In
2006, Don Rittner and Greta Wagle led
the effort to construct a replica of the
Onrust, employing original 17th century
construction methods.

The ship is currently based in Waterford,
and delights visitors to every waterfront
festival with frequent firings of its
cannon amid shouts of “fire in the hole!”
The public is welcome to climb aboard
to view the cargo hold and other parts of
the vessel.

The sense of history and purpose was
evident at the ribbon cutting ceremony,
attended by Congressman Paul Tonko
and state Assemblyman John McDonald.

“As we cut this ribbon and begin our
relationship with the Chamber of Commerce
it’s important to remember that
in 1614 the Onrust was intended for
business,” said Don Rittner, president of
the Onrust Project, Inc. “It is our oldest
example of a Made in New York product.”

It was perhaps fitting that the celebration
took place at Saratoga County’s
international harbor during a major festival,
where the 17th century vessel was
moored alongside steamboats commemorating
the motive power first employed
in the 1800s, plus 20th century yachts
from around the country, and finally the
ultra-modern solar powered demonstration
vessel RA, departing on its second
annual tour of the Erie Canal to promote
the virtues of clean energy and power
from the sun.

Several weeks earlier another alternative-
fueled vessel, the sailing barge
Ceres, made national news during its
visit to Mechanicville by taking on cargo
from two local business owners.

As Halfmoon farmer Michelle Petuske
loaded cartons of her locally-grown and
made Pixie’s Preserves, she commented
that “I was just kind of fascinated by
it — the idea of putting my product on
a barge,” and reports from the just-completed
voyage to New York City indicate
that her jams and jellies were among the
most popular products carried aboard.

Some teas from the Blu Tea Co., owned
by Mechanicville’s Nellie Ackerman, also
made the trip, helping to highlight the
unique offerings available from Saratoga
County farmers and artisans.

The region is a leader in maritime commerce
for 400 years and counting. For
more information contact the Chamber
at 371-7748 or email pete@southernsaratoga.org

Bardunias is president and CEO of
the Chamber of Southern Saratoga
County.