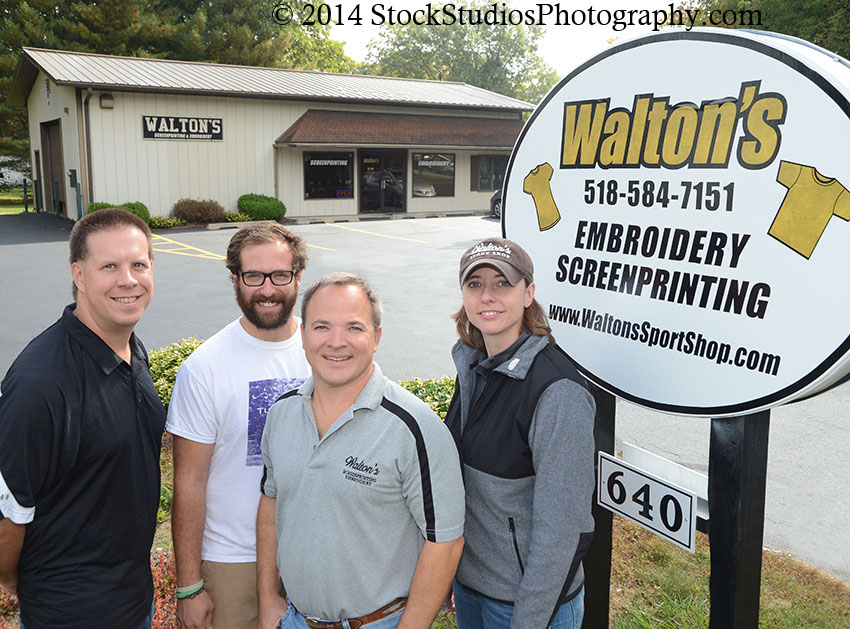 Walton’s Sport Shop, long a fixture on Lake
Avenue in Saratoga Springs, has moved away
from the downtown area to 640 Maple Ave.
Walton’s opened on Maple Avenue on Aug. 1.

The Lake Avenue building will eventually
house Kane’s Fine Wines and Spirits. The interior
of the building is being renovated.
The bigger space gives more room for his onsite
production. LeCours said business at Walton’s
this far is ahead of last year’s numbers.

He currently employs four full-time employees
and two part-timers. Because 75-80 percent
of orders come in by email and another 10
percent via phone, the loss of foot traffic from
the downtown area is not much of an issue.

The original location at 59 Lake Ave. opened
in 1929, primarily as a store for hunting and
fishing supplies. In 1974, Al Fairbanks bought
the store from Bob Walton Jr. By 1978, with
current owner Tom LeCours, the store was
carrying a wide array of products for tennis,
hockey, soccer, and many other sports. It
became a place where athletes stopped in not
only to buy equipment, but to have a tennis
racquet restrung, skates sharpened, and equipment
maintained.

LeCours bought the store in 1989. He said
shopping malls had arrived in Wilton and
provided stiff competition for equipment sales.

LeCours said initially, orders had been sent
out of the store to be imprinted or embroidered,
but the quality of work was uneven and
the timing of deliveries was less than ideal. Efforts
were made to expand in-house production
of screenprint and embroidery products and
business tripled two years in a row, he said.

Merchandise sales and maintenance became smaller and smaller parts of Walton’s
business and Walton’s became largely a production
business trying to function in a retail
space, said the owner.

LeCours said a more retail-oriented business
might benefit in the downtown location
with 12 of its own parking spaces. But he
wanted to make sure it would be a tenant with
solid business experience who would likely
stay in Saratoga for a long while.

He knew of a family that owned a package
store in Massachusetts for 25 years. He approached
a member of the family, originally
from Saratoga about opening a store in the
Lake Avenue location. An agreement was
struck.

For 10 years, Walton’s has handled Little
League uniform orders from 20 leagues, ranging
from north of Lake George to as far south
as Hoosick Falls and with an east-west range
from Greenwich to Galway. LeCours said he
is proud of never missing a deadline, even
if it means getting an order for uniforms on
Monday for a season that starts Friday of the
same week.

Besides big orders like Little Leagues or
YMCA basketball uniforms, Walton’s can accommodate
orders for school teams or youth
programs and even a small order of 10 shirts
to commemorate a family event. They also can
add corporate logos to businesses’ uniforms.

In addition to screen-printed and embroidered
products, Walton’s can use other methods
to apply writing and images onto clothing,
including a CAD-cut method and transfer
applications. LeCours said Walton’s strives
to find the best solution for each customer’s
needs at the best price.

A new website is in the works, but Walton’s
Sport Shop can be found at waltonssportshopinc.com and on Facebook. Email can be sent
to waltonssports@msn.com. The phone
number is 584-7151.