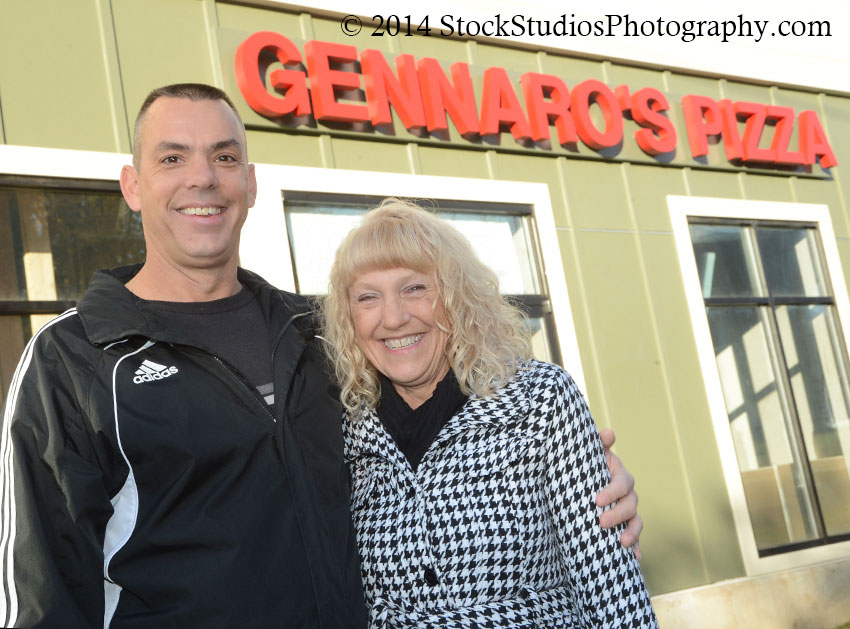 Wayne Cherry, owner of Gennaro’s Pizza Parlor, stands with his wife Kathy outside his new restaurant at 46 Marion Ave. in Saratoga Springs

“No frozen products; everything prepared
in house,” is the promise of Wayne
Cherry, owner of Gennaro’s Pizza Parlor at
46 Marion Ave. in Saratoga Springs.
It will join other new businesses at the
new Fresh Market Plaza.

Still under construction, “a little slower
than I hoped for,” the restaurant is scheduled
for an early December opening,”
Cherry said.

The pizza oven is on the way and scheduled
to arrive from Italy in November. He
said it will be both gas- and wood-fueled,
with a rotating back to keep the heat circulating.
When it arrives, the oven will be set
into a stone facade and be the first thing
most patrons see as they enter Gennaro’s.

The owner characterized himself as
an “Irishman who loves Italian food” and
claimed that in Ireland, Italian food is
more popular than Irish fare. In addition to pizza, Gennaro’s will offer
submarine sandwiches, arrancini (ricotta
cheese balls), chicken wings and full dinners,
with a “Gennaro’s special” in each
category. He also plans to grind his own
meat for the meatballs.

Once things are up and running, Cherry
expects to have 10 employees, including
people to deliver pizza. He has already
chosen the “core guys,” all people with
restaurant experience. They include
his stepson, now working at the Hall of
Springs. His wife, Kathy, will also help out
part time at the counter.

The restaurateur was a cook at the Olde
Bryan Inn in Saratoga Springs, beginning
in 1949 when that restaurant opened. He
has also cooked for restaurants in Fort
Lauderdale, Fla., and Wolfboro, N.H. He
operated non-restaurant businesses in
Saratoga Springs and Queensbury.

At the outset, Gennaro’s will offer only
soft drinks but Cherry plans to apply for a
beer and wine license after the restaurant
opens.

Joe Aguilo is doing the construction
work. Saratoga architects Buzer & Tucks
designed the building. Cherry can be
reached at 584-1900.