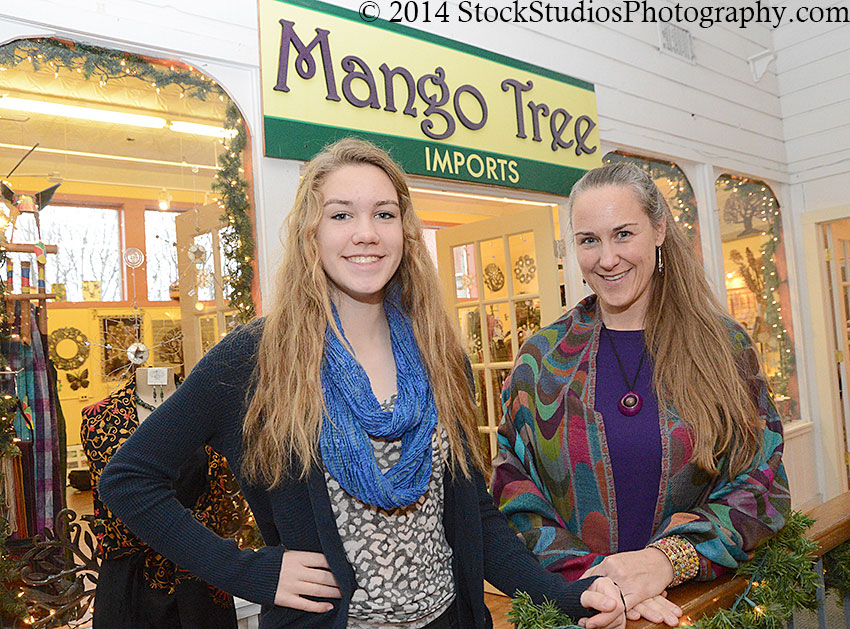 Kim and Chris Andersen established
Mango Tree Imports as a retail store in
Ballston Spa about nine years ago, having
started their business as off-site sales of
accessories like scarves, jewelry, and home
décor items.

Recently, Mango Tree Imports moved into
space in the Saratoga Marketplace at 454
Broadway in Saratoga Springs.

The Andersens also own Empire State
English, a school for teaching English as a
second language to adults, and Capital Region
Language Center, a school for teaching
multiple languages (Arabic, Chinese, Russian,
Korean and others) to English-speakers.
Those were also relocated from Malta
to 77 Van Dam Street in Saratoga Springs.

In addition to the accessories and home
decor items, Mango Tree Imports carries a
large variety of coffees, teas and chocolate.
Decorative boxes, wrapping paper, and cards
are in the shop, along with some unique
Christmas ornaments. Hand-woven table
linens, block prints from India, baskets from
Botswana (where Chris Andersen served in
the Peace Corps), and international music
are all part of what Kim describes as “a bit
of a world tour.”

There are items in the store representative
of over 65 developing countries, including
photos of the creators of some of the
store’s merchandise.

Kim described Mango Tree Imports as “the
only area business 100 percent committed
to Fair Trade.”
The philosophy of Fair Trade emphasizes
poverty elimination in developing countries;
connecting communities in the developed
countries to farmers, producers, and artisans;
fair wages paid to those workers, and
an absence of child labor.

Kim said the inspiration for establishing
Mango Tree imports came about after she
and her husband had returned from four years of teaching in Paraguay. There were
items from their lives in Paraguay that they
missed. In seeking to acquire them, they
became aware of the various ways in which
Fair Trade business connections to many
developing countries are made.

Business has been good since the relocation
to Broadway, the owners said. The
Andersens are seeking partnerships, such
as the one they have formed with Northshire
Books in which Northshire hosts French and
Spanish-language story times presented
by readers from the Andersens’ language
schools.