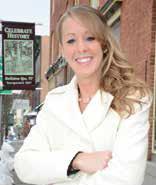 Heather A. Clickner, who grew up in Waterford,
said she always wanted to be an attorney.

She pursued it and recently opened an office
in Saratoga Springs. She
practices family law, where she handles cases
that deal with custody, domestic abuse, divorce,
child support, and other cases. Clickner has experience
in family law, civil litigation, municipal
law, personal injury and traffic matters.

During law school she was involved with
organizations that provided representation to
indigent clients. She interned with Chief Judge
Haiganush R. Bedrosian of the Rhode Island
Family Court, Rhode Island Legal Services and
the Rhode Island Office of the Attorney General
in the White Collar Crime and Juvenile Units.

She was selected to the university’s School of Law
Immigration Clinic and was involved with the
Immigration Law, Education & Advocacy Project
at Catholic Social Services in Fall River, Mass.
“I like to keep the costs low so the savings can
be passed on to the client,” said Clickner. “There
are so many people who need legal representation
but can’t afford it.”

She provides pro bono representation in special
immigrant juvenile cases being adjudicated in front of the Federal Immigration Court in New
York City with the U.S. Committee for Refugees
and Immigrants (USCRI).

When not working on law cases, Clickner
helps volunteer with the Fresh Air Fund, an
organization that provides summer vacations to
the rural countryside for New York City children.

As the chairwoman of the program in the Ballston
Spa area, Clickner helps publicize the program
and also hosted a child last summer.