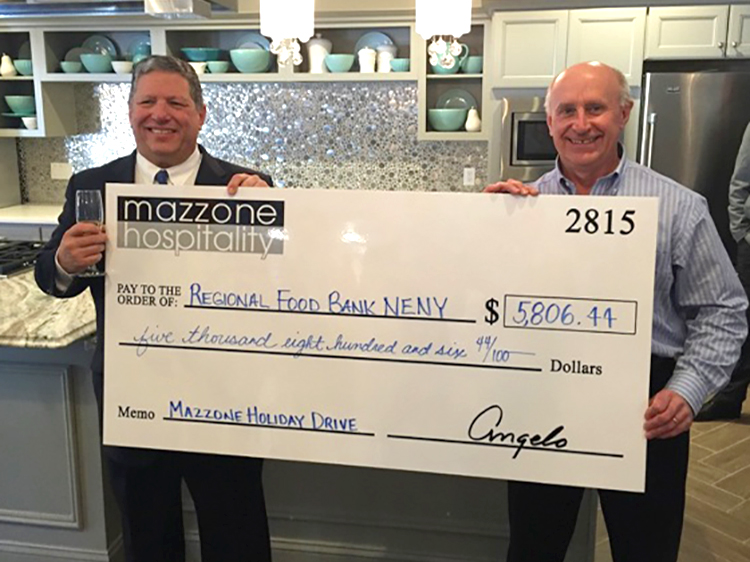 Mazzone Hospitality, a major caterer and
restaurateur in the area, unveiled its new
corporate headquarters at 743 Pierce Road in
Clifton Park on Jan. 28.

The 25,000-square-foot facility represents a
$2.5 million investment and for the first time
consolidates the organization’s catering operations,
administrative offices and warehouse in
the same building, the company said.

Officials from the community joined representatives
from Mazzone Hospitality to tour
the facility, which features a state-of-the-art,
2,000-square-foot show kitchen that will be
used for cooking demonstrations, classes and
small private functions.

The new headquarters houses a catering
kitchen, which will be used to prepare food for
up to 300 events each year, as well as a dedicated
bakery for wedding cakes, desserts and
pastries. Additionally, the building includes a
10,000-square-foot catering storage warehouse.

“Our new headquarters is the culmination
of decades of hard work, strategic growth and
sustained culinary excellence. I am incredibly
proud of our entire team and this would not
have been possible without the commitment
they demonstrate each day,” said Angelo Mazzone,
owner of Mazzone Hospitality. “The new
facility allows us to become even more efficient
and cohesive by centralizing our operations. We
look forward to continuing to create memorable
special events out of our new home base.”

During the unveiling, Mazzone Hospitality
announced a $5,800 donation to the Regional
Food Bank of Northeastern New York, which
was the result of a recent company-wide charitable
initiative. For each dessert sold at Mazzone
Hospitality restaurants during December,
partial proceeds were donated to the food bank,
with a matching contribution from Mazzone.

Guests also contributed to the campaign via
collection canisters and food donation bins,
and Mazzone Hospitality staff volunteered at
the food bank throughout the month.

“Angelo and the Mazzone Hospitality team
have always been great community partners
and we are thankful for their generosity,”
said Mark Quandt, executive director of the
Regional Food Bank of Northeastern New
York. “While his business is based on feeding
guests, Angelo recognizes that there are many
individuals in our community who struggle
with hunger on a daily basis. This donation and
their volunteer efforts are instrumental in our
mission to fight hunger.”

The company owns and operates Prime at
Saratoga National, an upscale steakhouse on
the grounds of Saratoga National Golf Club.
Through its PRIME Business Dining division
the company oversees corporate dining
operations for M+W Group at The Foundry;
GlobalFoundries; PRIME @ 107; Ayco CafÃ©;
Golub Headquarters; and the SI Group.

The company operates and manages the
historic Parker Inn & Suites in downtown
Schenectady and also oversees the catering
operations at the Hall of Springs at the Gideon
Putnam in Saratoga Springs, Key Hall at Proctors,
and caters private weddings, fundraisers,
and corporate or social events.

For more information about cooking demonstrations,
classes and small private functions
at the corporate headquarters, contact Jaimie
Balogh at 690-0293.