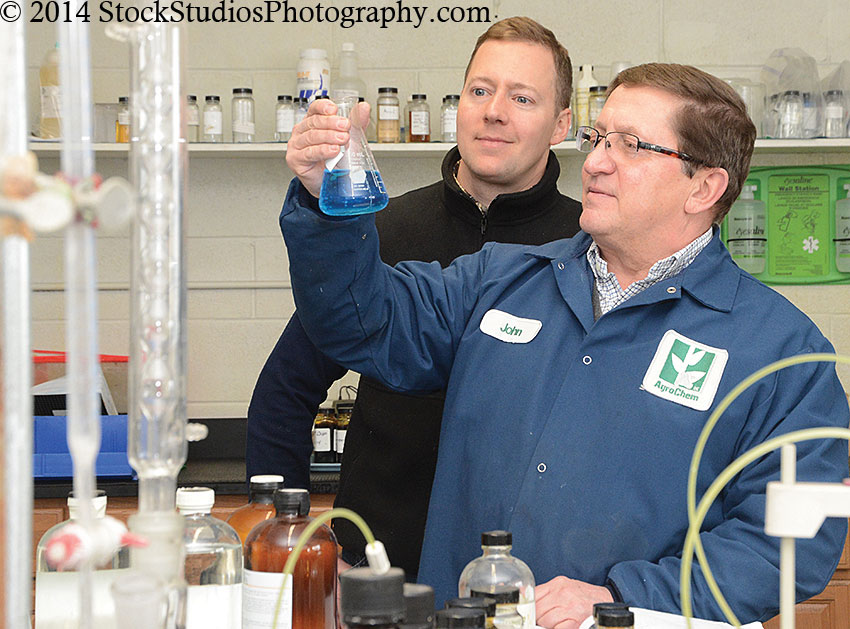 John DeMarco, right, and his son, Robert, founders of AgroChem, work in their facility that develops and manufactures sanitizing products for farms and dairies

John DeMarco sees an addition to his
company’s building as the key to reaching
$20 million in sales within the next
five years.

DeMarco and his son, Robert DeMarco,
founded AgroChem, a Saratoga Springs
company that develops and manufactures
sanitizing products for farms and dairies,
about 10 years ago.

Today, the company occupies 30,000
square feet at 3 Duplainville Road in the
Grande Industrial Park. It employs 26
people and does $15 million a year in sales
to customers all over the world, according
to the owners.

But AgroChem needs room to grow, say
the owners.

The company went before the city Planning
Board on Jan. 14, seeking permission
to expand its building by 5,000 square feet.
DeMarco said the project passed the initial
screening phase and should be up for
environmental review in February.

“I am being told that if everything runs
smoothly, the project will be completed by
September or October,” he said.
The expansion will provide room for
automation and new offices.

“More than anything else we need the
building updated,” DeMarco said. “It’s a
24-year-old building and it needs to be
updated so we can automate the mixing
of all of the products and put on a second
shift.”

He said automating and adding a shift
are key to propelling the company to $20
million in sales in five years or less.
“We have a demand, we just need to put
the product out the door,” he said.

The company has some new products
under development, including peracetic
acid, an organic replacement for chlorine.
DeMarco said innovation is one of the
factors driving AgroChem’s growth.

“We are looked upon as the innovators
in the industry,” he said. “We’ve come up
with products that solve problems in the
industry that some larger companies have overlooked.
“Almost everything we manufacture
we try to improve upon what is already
out there in the marketplace. In fact, we
receive calls from other manufacturers
about how some of our products are made.”

AgroChem holds patents in the United
States, New Zealand and Canada for Heal-
Max, a product that stops the progression
of an epidemic bacterial infection on the
hoofs of cows.
It also is seeking patents on HealMax
in Japan and Europe.

The company has seven sales offices
across the country, including California,
Michigan, Montana and other states with
large dairy production and has been
increasing its efforts to sell its products
internationally.

“We do quite a bit of business at this
time in Canada,” DeMarco said. “We ship
full container loads to Japan, multiple
containers at a time to Russia, Belarus,
Korea, and throughout Europe and the
United Kingdom.”

The company has made arrangements to
use other space in the Grande Industrial
Park while the construction is taking
place, so that it will be able to keep up
with production and get orders out the
door, DeMarco said.

AgroChem expects to add four or five
new employees as result of the expansion,
including chemical operators who
mix products.

DeMarco said the positions come with
higher pay than most warehouse jobs in
the market, and benefits that include a
401k and health insurance.

AgroChem started in the Grande Industrial
Park in about 5,000 square feet leased
from Slack Chemical Co. According to the
owners, it quickly outgrew that space and
moved into one of three attached buildings
at 3 Duplainville Road in Saratoga Springs.
The company said over time, it took over
all three buildings. The company also has
five warehouse locations throughout the
United States and in Canada.