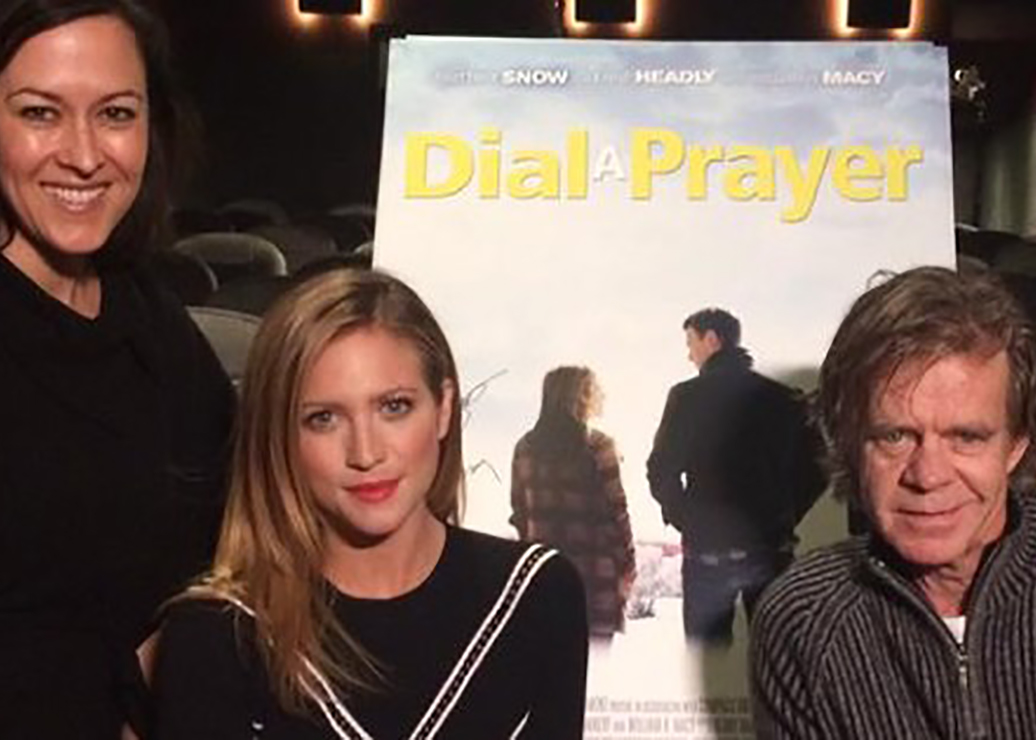 William Macy and Brittany Snow, center, star in “Dial A Prayer,” a new film directed by Maggie Kiley, left, and released by a film company based in Saratoga Springs, Compass Entertainment.

The movie opened on April 10 in select
theatres nationwide and is currently available
to rent On Demand and on iTunes. It
was also made available for purchase on
Amazon and at Wal-Mart starting May 10.

He said he could not comment yet on who
would star in the film. Offers have been sent
out to actors and his company is gauging
availability and interest before deciding on
the stars.

He has written and will direct “Adirondack
Hunt Club.” It will be the company’s fifth feature
film. The company moved to Saratoga Springs in 2009 and has offices downtown
above Bow Tie Cinema.

“Dial-a-Prayer” is a coming-of-age tale
of a troubled young woman named Cora,
(Brittany Snow), who begrudgingly answers
phones at a Prayer Call Center under the
watchful direction of its leader (William H.
Macy). When her prayers begin to make a
difference, one caller shows up convinced
he’s been saved by her voice.

As Cora struggles to reconcile her past
and deal with her newfound gift, she begins
to find faith in herself, as well as her closet
companions.

“As a writer/director I understand the
need for the purity of purpose in any creative
endeavor,” said Fuller. “When making a film,
that singularity of vision always shows in
the final project and that is why we chose
to make ‘Dial A Prayer.'”

Fuller’s company is also involved in a film
being released later this year, “Darkness
Rising,” starring Tara Holt, Bryce Johnson and Katrina Law. It is a psychological horror
movie which follows the lone survivor of a
brutal family massacre. Haunted by her past,
she revisits her childhood home on the eve
of its destruction, awakening the evil that
resides there.

Compass Entertainment is an aggressive
new film production company in Saratoga
Springs, aimed at bringing intelligent,
compelling, provocative films back into the
mainstream, made with the freedom that
comes by shooting outside of the studio
system. Compass Entertainment is owned
and operated by Fuller and his wife Julie S.
Fuller who served as executive producer on
“Dial A Prayer.”

Fuller said the couple landed in Saratoga
by a “happy accident” a few years back and
ended up finding a home they wanted to
renovate and reside in. Since then, and two
children later, the Fullers have been active
in the community. He said living in New York
and Los Angeles spoiled them, getting them
used to good restaurants and plenty of activities.
“Saratoga meets that criteria,” he said.

Fuller is a producer, writer and filmmaker
with 20 years experience working in TV,
film and stage. In 2008 he formed Compass
Entertainment to focus on the development
and production of independent, character
driven films. He has been a guest lecturer
on Entrepreneurship in the Film Industry
at Skidmore College and RPI. He serves on
the Yale School of Drama board of advisors
as well as the Yale University alumni board,
the Nantucket Theater Institute board of
directors and sits on the board of trustees
for the Hyde Museum.

He is a graduate of the Yale School of
Drama.

Julie Fuller, COO, has over 10 years experience
in public relations and fundraising,
having worked in development for both senatorial
and gubernatorial political campaigns,
as well as for the Institute for American Values,
a think-tank headquartered in New York
City. She serves on the board of directors
for a number of organizations including the
Saratoga Performing Arts Center (SPAC).

She is a graduate of Princeton University
and earned her MA from Yale Divinity
School.