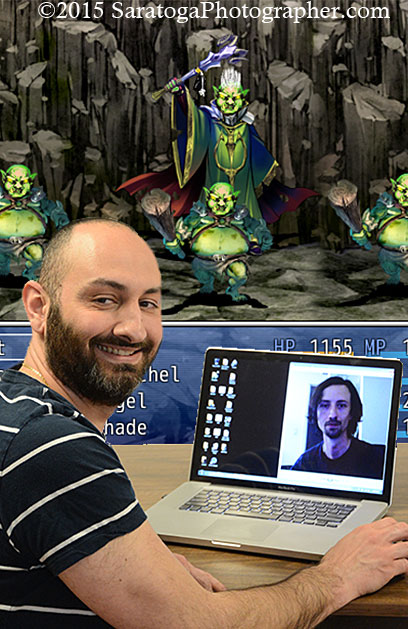 After Daniel Chessare and Michael Commini
graduated from Full Sail University in June 2014
with degrees in video game design, they were
frustrated that they could not find jobs in the
industry. Ambitious and determined, the two
decided to launch their own video game studio,
All Father Studios.

Chessare lives in Saratoga Springs. Commini
is based in Santa Fe, N.M. By December, they
founded All Father Studios and started work
on the first title.

All Father Studios is dedicated to building
classic role-playing games with retro aesthetics
and a great story line, they said. Their main
interests are Japanese role-playing games
(JRPGs) with beautiful graphics and a well
thought-out narrative.

“A good story is rare enough that when it has
one, it becomes big news,” said Commini.
The partners in the video game studio spent
the past year crafting their first video game, to
be launched this summer.

“The Dekker Records: Thunderstone Blues”
is a roleplaying game inspired by 1940s noir
novels, they said. In this game, players take on
the role of Dekker, a female detective who has
been called in to solve a curious case in the city
of Hammett.

The Dekker Records features classic JRPG style
game play that video game players who
are into traditional video games will enjoy, the
partners said. It has an intricate narrative that
can be played in various ways, and an electric
soundtrack that is reminiscent of noir cynicism
and fantasy fiction.

Gamers who play games such as Final Fantasy
and traditional Super Nintendo games would
enjoy this, according to the partners.

Chessare and Commini believed it was important
to develop a well-written female lead
for the game. Careful consideration was taken
to develop the character throughout the story.
“When there is a scene, we don’t think ‘How
would a woman deal with this situation?’ But
‘How would a hard-boiled detective deal with
this situation?'” said Chessare.

The Dekker Records will be released in
installments. The first installment, Act I, is
scheduled for release in July. Each installment
will cost $5. There will be no digital rights management
(DRM) on the game, allowing people
to share with their friends, they said.

The game operates on a PC and Windows
platform. While it is not currently available for
Mac or mobile device, All Father Studios hopes
it will be available in these formats in the future.

Chessare and Commini designed the entire
game by themselves. Commini is a skilled
musician and creates the soundtrack for the
game using original instrumental music. The 2D artwork is drawn and designed for the game.

While the two are excited to launch their
first game, owning their own business presents
challenges. Being a two-person team has placed
limitations on production and the pace at which
they can build games. There are also money and
skill-set challenges, they said.

The game is currently undergoing a crowdfunding
campaign on GoFundMe. Chessare and
Commini hope to raise enough money to hire
employees, such as designers and musicians.

The Dekker Records has a free demo that
is currently available to be downloaded and
played from the company website. The funding
website includes a blog where the developers
keep people updated on production of the game,
funding and more.

For more information on the company, visit
www.allfatherstudios.com.