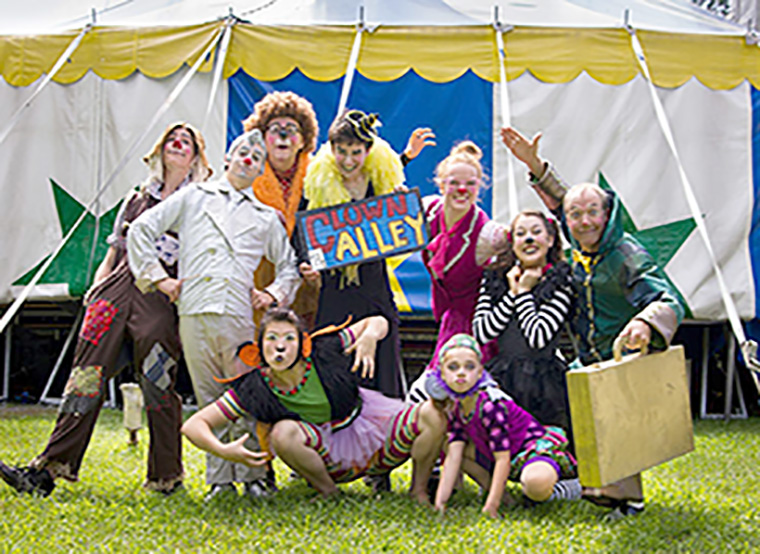 ‘Clown Alley’ is one of the many parts of the Circus Smirkus 2015 Big Top Tour coming to Saratoga Springs On July 5 and 6, featuring performers from ages 11 to 18.

Circus Smirkus, the acclaimed international
youth circus, returns to the outdoor
polo field at Saratoga Casino and Raceway
for four performances this summer.

On July 5 and 6, families can gather under
the Big Top Tent as the Waldorf School
of Saratoga Springs presents the Circus
Smirkus 2015 Big Top Tour.

Circus Smirkus will have shows at 1 p.m.
and 7 p.m. both days. Tickets are $25 for
adults 13 and older and $23 for children
2-12. Children younger than two are free
on an adult’s lap. All proceeds raised will
go directly to the Waldorf School.

The show features aerials, acrobatics,
high wire, juggling, trapeze and clown acts
that include an array of brilliant costumes.

Circus Smirkus is the only American youth
circus to put on a full-season tour under its
own big top, a 24-meter, 750 seat, one ring
tent in the European style, according to the
organization.

Joining Circus Smirkus for his final summer
on the tour is Saratoga Springs’ own
Keenan Wright-Sanson, who is a senior at
the Waldorf High School. Wright-Sanson
specializes in the slack line, balance acts,
and will also show off his clowning abilities.
He is the younger brother of Taylor Wright Sanson, a Waldorf School alumnus who also
toured with Smirkus for several years.

“We are proud of Keenan as a student
and performer and look forward to seeing
him take part in this year’s presentation of
Bon Appetit,” said Matt Kopans, director
of community relations and development
at the Waldorf School of Saratoga Springs.

Circus Smirkus is a non-profit, award
winning international youth circus founded
with the mission of promoting the skills,
culture and traditions of the traveling
circus and inspiring youth to engage in
life-changing adventures in the circus arts.

The 2015 Circus Smirkus will include 66
performances this summer between late
June and mid-August. Now in its 28th year,
the Vermont-based organization has raised
over $2.5 million for non-profit partners.

The Waldorf School of Saratoga Springs
first brought Circus Smirkus to Saratoga in
2007 as a fundraising and outr each event.
“We have valued our partnership with Circus
Smirkus over the past 9 years and can’t
wait to present this year’s colorful production
to the community,” said Anne Maguire,
administrator of the Waldorf School.

The Waldorf School of Saratoga Springs
draws upon the successes of Waldorf schools
world-wide to provide a strong focus on
math, science, literature, languages and
the arts through hands-on, experiential
learning. Currently entering its 32nd
year of operation, the school educates
children from pre-school through the 12th
grade. For more information, visit www.WaldorfSaratoga.org.