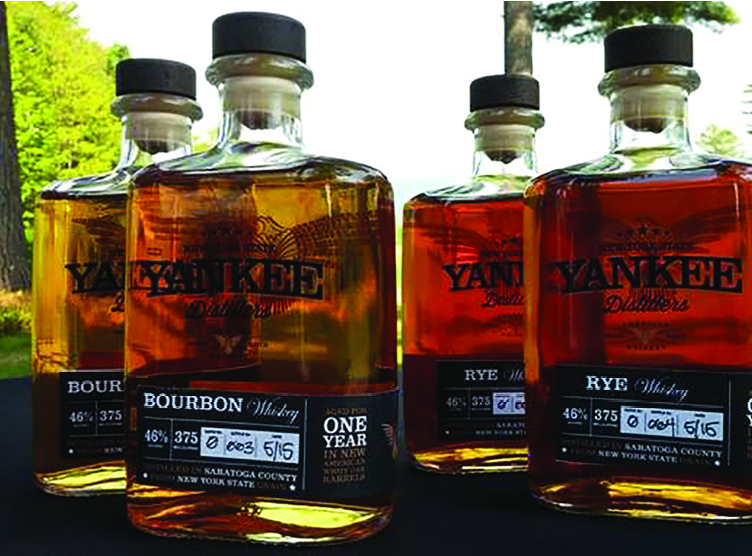 These bottles of Rye Whiskey are some of the products being made at Yankee Distillers in Clifton Park, a 9,000-square-feet facility recently opened in Clifton Park.

Yankee Distillers in Clifton Park, a new
establishment featuring whiskey made on the
premises, got off to an auspicious beginning
with a well-attended ribbon-cutting in late July.

The three owners–Matthew Jager, Walter
Kleemeier, and Scott Luning–got their start
at an Albany distillery and, in fact, “we brought
a whole lot of whiskey with us” and will serve
that while their first Clifton Park product ages.

“We’re proud to make Saratoga County the
home of what we believe to be the start of the
next great chapter in producing the very finest,
most sought-after American whiskeys,” said
Kleemeier at a recent business grand opening.

“Since New York allowed for farm-based
distilleries such as Yankee to open in the past
decade, craft spirits and their producers have
become destinations to attract spirits enthusiasts
and tourists to areas across the Empire
State. We’re proud to have the support of local
and state leaders and look forward to producing
spirits proudly made from local grain.”

At nearly 9,000 square feet, the owners say
Yankee Distillers is the largest distilling facility
in the greater Capital Region. The facility, part
of the Fairchild Square Business Park, is made up of the distilling room, a tasting room and
retail outlet.
All the co-founders hold degrees in physics.

Kleemeier and Luning have worked in the
nanotechnology sector, while Jager co-founded
the Albany Distilling Co.

Initially, Yankee Distillers will prepare bourbon
and rye. A little later, they will add vodka.
They also plan to make rum, but that comes
under a different license. Not much sugar cane,
a key ingredient, is grown in New York state.

The bourbon will be made from New York
state corn and a small amount of rye; the rye
whiskey, from rye and a small amount of wheat.
They buy those raw materials by the ton, grind
it into meal (a little coarser than flour), cook
it, add malt and then let it ferment with yeast
for three or four days.
Then, it is distilled and collected in barrels.

That process takes about a week, after which
the distillate ages in the barrel for at least a year
before being bottled, said the owners.
Rum takes a little less time, about a month
for white rum, a little longer for the older, darker
rums that will be aged in used whiskey barrels.

Jager expects to have white rum available in
about a month and the amber variety in time
for the year-end holidays. He calls the product
“colonial rum” and claims to use methods similar
to those of the colonial period. The rum does not
come under the farm distillery license and will
not be sold at Yankee Distillers. It will only be sold wholesale, off the premises.

He said the vodka will be a grain product
made from Finger Lakes wheat. The first of that
should be available in the fall.

In addition to requiring the use of state
ingredients, the farm distillery license restricts
what can be served. It requires food be available,
Jager noted, but does not allow it to be prepared
on the premises.
There will be snacks, including cold meats
and cheese from Cheese Traveler in Albany.
“Not a meal, just a little something to pick on,”
Jager said. Later, they might invite a food truck
or two to park out front.

Because the distillery is located across from
the Schmaltz Brewery, Jager envisions one day
sharing the food service with that establishment.
Despite the restrictions, Jager said he and his
partners are “quite happy with what the license
allows us to do.”

Yankee Distillers will provide “a real nice tour
lasting about half an hour and ending with a
really elaborate tasting,”Jager said.

The website is YankeeDistillers.com and the
telephone number is 406-3245.