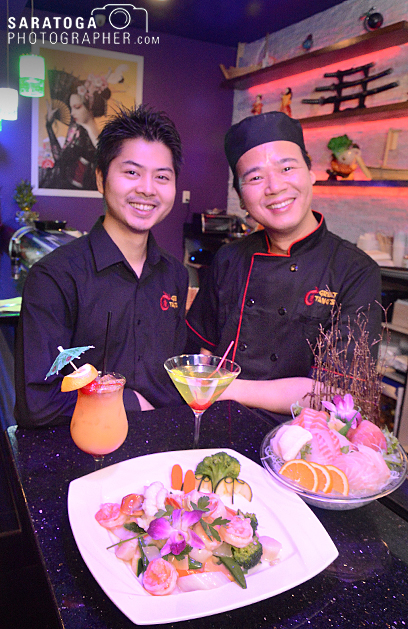 The establishment opened in October in the
Price Chopper Plaza at 127 Ballston Avenue.
It offers a variety of Chinese, Japanese, and
Thai food.

Owner Peter Chen grew up in China, and
moved to New York City. It was there that he
began his career in the food industry. He has
been working in restaurants since 1998. He
has owned restaurants in New York City and
Pennsylvania, but wanted a change of pace.

“I wanted to try something new,” said Chen.

“I heard about Saratoga Springs and how it
was supposed to be very nice. I heard about
the track season. People told me it was a nice
place to raise a family.”

Chen has a wife who also works at Great
Tang’s, and two young children.

The menu at Great Tang’s offers an array
of Chinese, Japanese and Thai dishes. The
food, including sushi, is freshly prepared at
the restaurant.

One of the things that sets the restaurant
apart is the quality of the ingredients, said
Chen.

“A lot of other restaurants use dark meat
chicken. We only use white meat,” he said. He
also said that he finds the highest quality cuts
of beef for his dishes.

“The quality is very important,” he said.

On the menu, one dish that is extremely
popular is the Dragon and Phoenix. This is a
combination platter of both peppered shrimp
and General Tso’s chicken, served with rice. It’s
Chen’s favorite.

Chen believes his experience in the food
industry helps his restaurant to be successful.

“We have had at least 10 years getting everything
together. We go to different restaurants
trying different products and finding which
one is the best. So we will go to ‘restaurant A’
and we will think they have the best General
Tso’s sauce, and that is where we get it from.
And then we go to ‘restaurant B’ and we think
they have another sauce that we like, and we
get it from them. We go to restaurants finding
the best and bring it together.”

Great Tang’s may seem unassuming from
the exterior, being located in the Price Chopper
Plaza. Chen admits that many people do
not even realize there is a sit-down facility
inside the restaurant. However, the restaurant
is styled in urban, modern decoration.

The walls are black, and neon lights around
the room send blue and green shades in all
directions, creating an inviting feel. There
are several seating options available. The restaurant
also has a full-service bar, with many
different name-brand liquors available.

“We have had a lot of customers,” said Chen.
“It picks up more each day.”