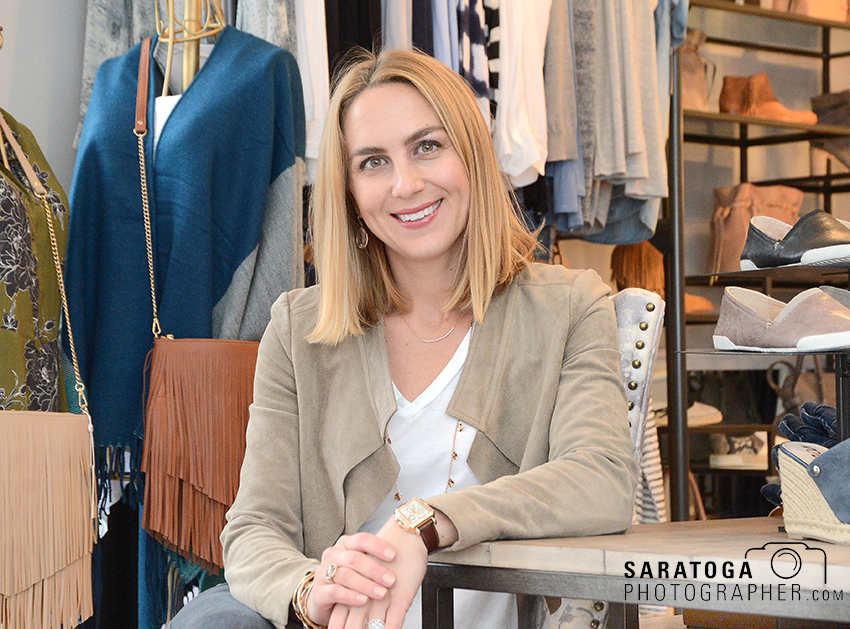 Laura Farrar-Pileckas is the owner of Violet’s of Saratoga at 494 Broadway.

Violet’s of Saratoga, a women’s clothing and accessories store at 494 Broadway, Saratoga Springs, reopened in February after a major makeover. Owner Laura Farrar-Pileckas plans a party on March 10 to show off the new look and celebrate the reopening.

In the meantime, the shop is fully stocked and open for business.

Violet’s has “a fresh new feel,” more modern and plush, with new furnishings and light fixtures, as well as a few new brands of merchandise, according to Pilleckas. “I’m excited about the season coming up,” she said, and she hopes that customers will share her enthusiasm.

Pileckas opened Violet’s nine years ago as a women’s clothing store. A few years later, she opened Stella’s, a women’s shoe store. The two were later combined into the store at its present site in the Collamer Building, near the Saratoga Springs City Hall.

Pileckas said that she “always loved fashion” and also enjoyed business, including working in retail. She has a bachelors degree in finance and worked for five years in that field in Boston.

Then, she “decided to become an entrepreneur. … I couldn’t see myself sitting at a desk for the rest of my life.”

These days, she doesn’t get much chance to sit behind a desk. In addition to running Violet’s, she helps out with her husband’s building and contracting business and is raising three sons, ages 9 , 3 and 18 months. She grew up in Glens Falls but she and her family have lived in Saratoga Springs for more than 10 years.

The merchandise tries to hit a couple of generations, she said, targeting “fashion forward” mothers and daughters shopping together.

Currently, she is featuring a lot of color and florals in dresses designed for a day at the track or an informal party (no evening gowns in stock). Dress sizes range from 2 to 12; shoe sizes, from 6 to 10. There are no petits or large sizes, she said.

“You can’t always dress everyone under one roof,” she said.

Prices range from accessories and jewelry from $25, dresses primarily in the $50 to $150 range, and some splurges like $400 leather boots. “We try to keep prices reasonable but still keep the quality up,” she said.

Jessica Guerin manages the store. She has been with the business for about five years. In addition, there are two full-time and six par-time employees. Another may be added for the summer.

The reopening party on March 10 will be from 6-8 p.m. Pileckas plans cocktails and hors d’oeuvres, a DJ, giveaways, a designer trunk show, gift cards, prizes and a 20 percent discount on merchandise purchased that evening.

For further information about Violet’s, call the store at 584-4838.