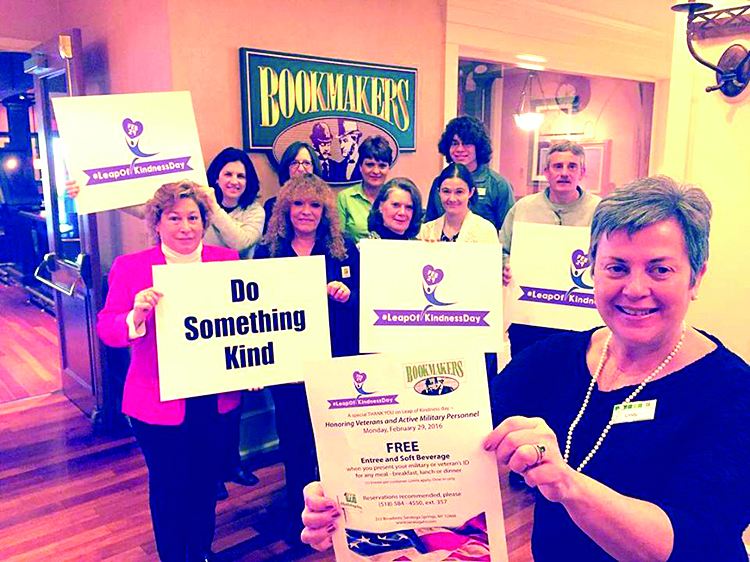 Cindy Hollowood, general manager of the Holiday Inn Saratoga, in the forefront, poses with her staff on Leap of Faith Day. The hotel offered a free entree and beverage for military veterans that day.

The Saratoga County Chamber of Commerce asked members ‘What would you do with one extra day?’ in reference to the leap year day of Feb. 29.

According to Todd Shimkus, Chamber president, the question was asked of a special task force formed by the Chamber. last fall During the discussion, Bo Goliber of Fingerpaint Marketing offered an idea: Leap of Kindness Day.

The group decided to invite people to use the extra day to do something kind for someone else.

“Little did anyone on the task force know at the time. But this idea spread like wildfire after being announced at the Chamber’s annual dinner on Jan. 28,” said Shimkus. “Since that time, dozens of organizations across Saratoga County and hundreds of volunteers decided to thank or help thousands of their neighbors on this day.”

He said beyond Saratoga County, local chambers of commerce in 30 states as far away as Alaska decided to encourage members and communities to participate in the Leap of Kindness Day celebration. Viewing social media posts, the Saratoga County Chamber of Commerce has seen people doing something kind for someone else using the hashtag #leapofkindnessday as far away as Bangalore, India.

Employees of the U.S. Chamber of Commerce in Washington D.C., were encouraged to participate and GlobalFoundries in Malta, sent emails to its 18,000 employees worldwide inviting them to do something kind for someone else, said Shimkus.

“We were focused on making a positive impact here in Saratoga County,” he said. “We already knew our members were generous but the level of participation and the impact made by those who participated in the first-ever Leap of Kindness Day right here in Saratoga County was beyond our expectations. We were really thrilled to see our members organize surprise thank you’s for local police departments, EMTs, fire departments and local hospitals and urgent care centers.

“We had people giving flowers and new socks to nursing home residents and local school children thanking crossing guards and their teachers.”

“From tipping big, to buying someone a cup of coffee, to writing a thank you note to a friend or coworker, there was a lot of kindness being shared among friends, families and co-workers on Feb. 29,” he noted.

The Chamber encouraged people to post on social media the acts of kindness they did as individuals or groups.

“This was definitely a time when we used social media for good,” added Shimkus. “Not sure we could have mobilized as much national or even local action before we had access to social media as a platform to share ideas and to engage people. There were thousands of posts and many complimented the Saratoga County Chamber of Commerce for creating this movement and inspiring people to give back to their community.”

He said the Chamber will likely reconvene the task force after the full impact of Leap of Kindness Day 2016 can be evaluated.