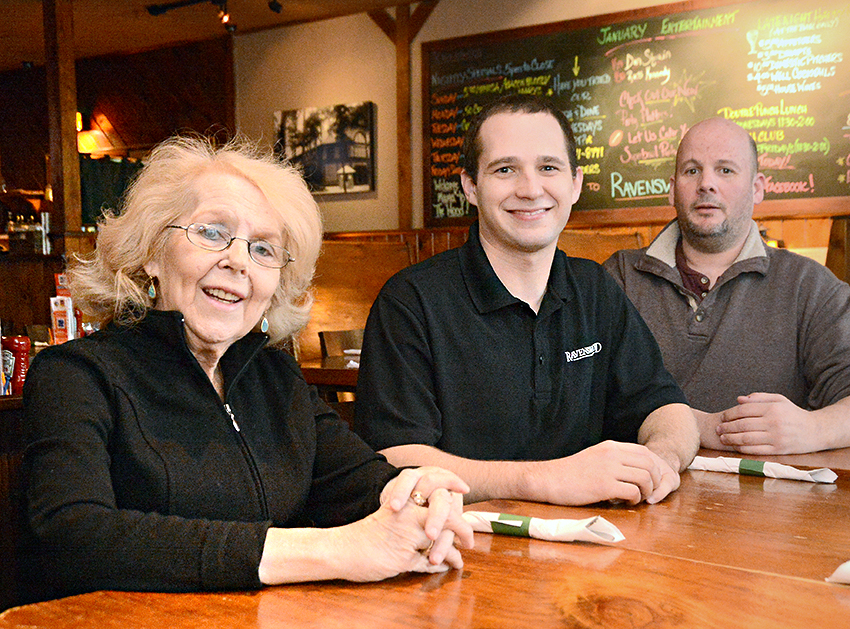 Stephanie VanAuken is the new owner of Ravenswood Pub at 1021 Route 146 in Clifton Park.

Originally opened in 1984, Ravenswood has been owned by Wayne T. Beale since 2013. He currently owns three other Saratoga County neighborhood taverns: Rusty Nail Grill and Tavern in Clifton Park (1999), Bentley’s Tavern (2002) and the Mill on Round Lake (2008).

A local veteran of the hospitality industry, VanAuken owned Mama’s Pizza in Clifton Park for 23 years before selling it in 2005.

She said since then, she often ran into former customers who expressed how much they missed her and urged her to get back into the restaurant business in that part of town.

It dawned on VanAuken that Ravenswood would be an ideal way to enter the business again and re-connect with her former customers. She said she approached Beale to see if he had any interest in selling the business.

According to VanAuken, Beale didn’t at first, but she was persuasive. 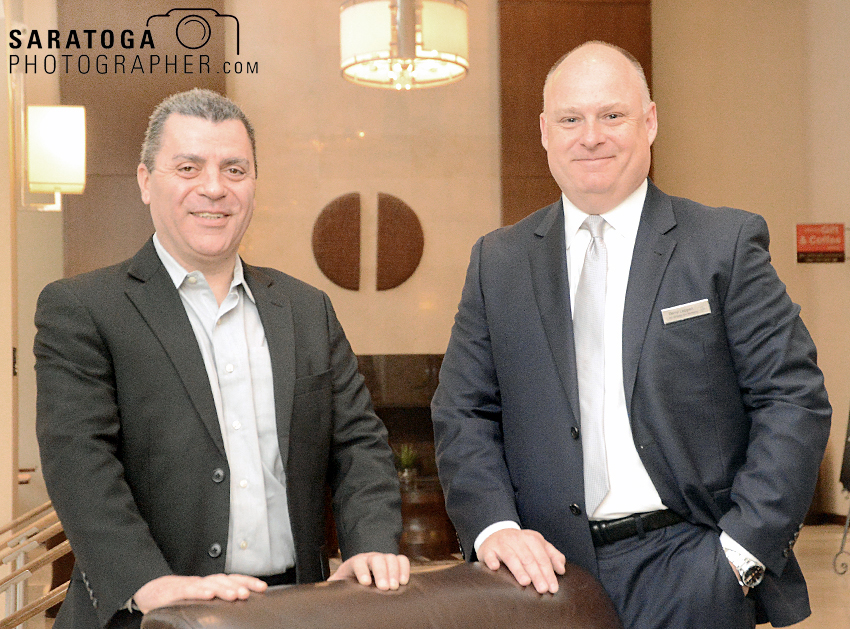 The Hilton Saratoga, the hotel attached to the Saratoga Springs City Center in downtown, is under new ownership.

“We are excited to say the property will remain a Hilton Hotel,” said Driftwood President David Buddemeyer.

Buddemeyer said the on-site general manager is Mik Mahdavi, who has experience in the Driftwood company. Darryl Leggieri is director of sales and marketing. 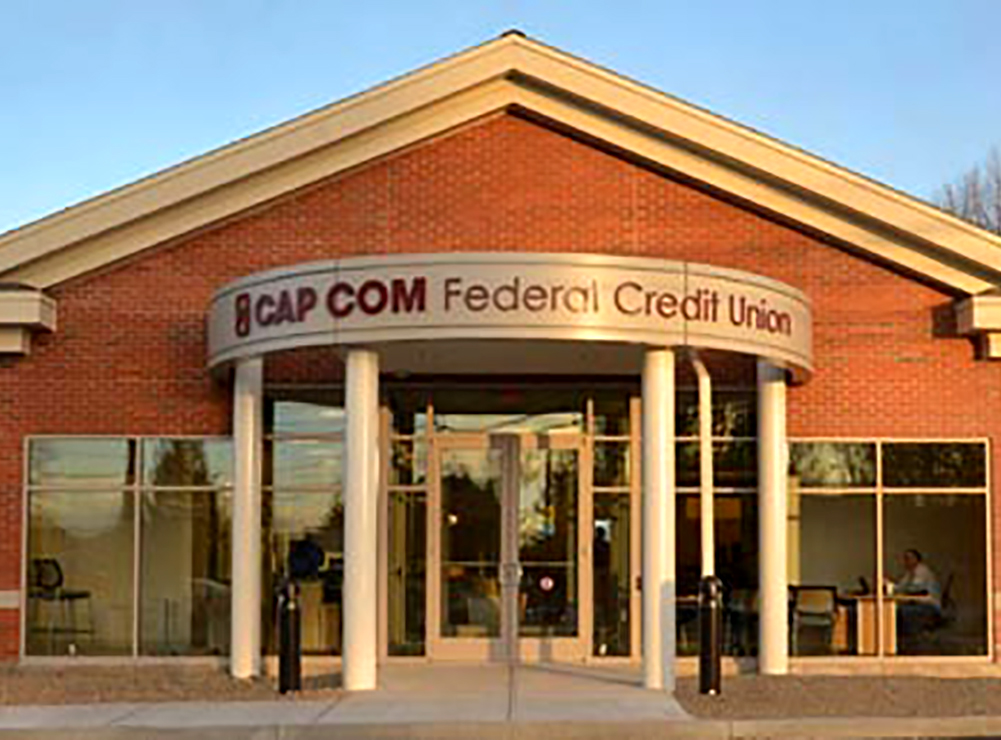 The newest CAP COM branch office is at 2439 Route 9 in Malta.Courtesy CAP COM

“Our members have been asking for a branch that is more convenient to northern Saratoga County and we delivered,” said President/CEO Paula Stopera. “Even while we continue to expand the mobile technology we offer, we know that many of our members still want the kind of in-person, one-on-one service that CAP COM is known for.”

Stopera said with more than $1 billion in assets, the credit union last year joined the CO-OP Shared Branch Network, expanding its footprint by offering transactional services in 5,000 locations throughout the nation. Through CAP COM’s mortgage subsidiary, Homeowners Advantage, its mortgage business has tripled over the past four years. 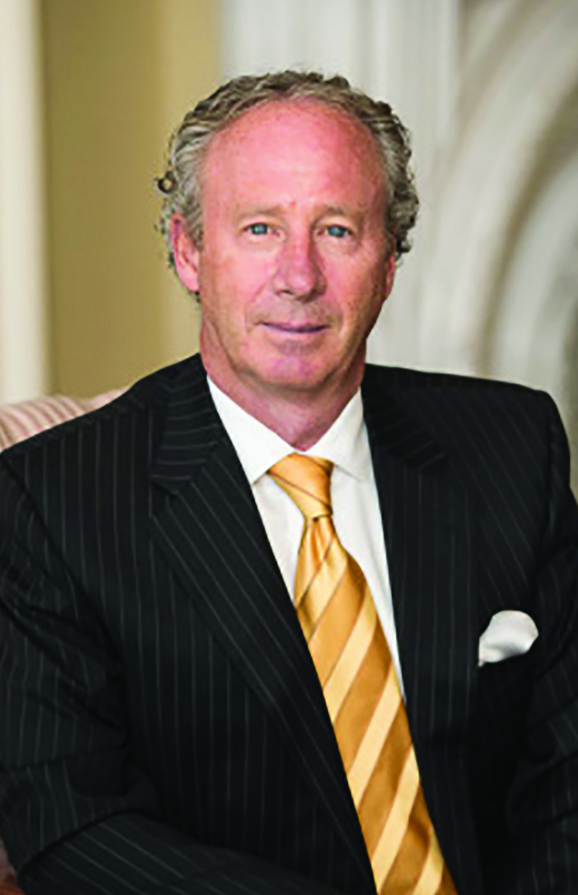 Up to date technology, combined with a personal touch, keeps clients informed about their assets and the events and trends that affect them.

Both are critical in a modern asset management practice, according to those in the field.

“Technology is a beautiful thing as long as you embrace it,” said Steve Bouchey of Bouchey Financial Group in Saratoga Spring. His company recently made a seven-figure investment in software to keep clients informed and to enable the professional managers to do their work more efficiently.

Clients can log on any time to see where their money is and to access some 20 reports. Meanwhile, he can rebalance several hundred accounts in a matter of minutes and issue tax reports to clients and, if the client wishes, to their tax preparers, also in a matter of minutes. The system, he said, “is up to date and spectacular. It’s amazing what clients can see and do.”

Plenty of information and the ability to check on their investments 24/7 can go a long way toward restoring investor confidence after scandals that rocked the financial world in recent years, Bouchey said.

“When they can check regularly to make sure their money is there, it puts clients’ minds at ease,” he noted. 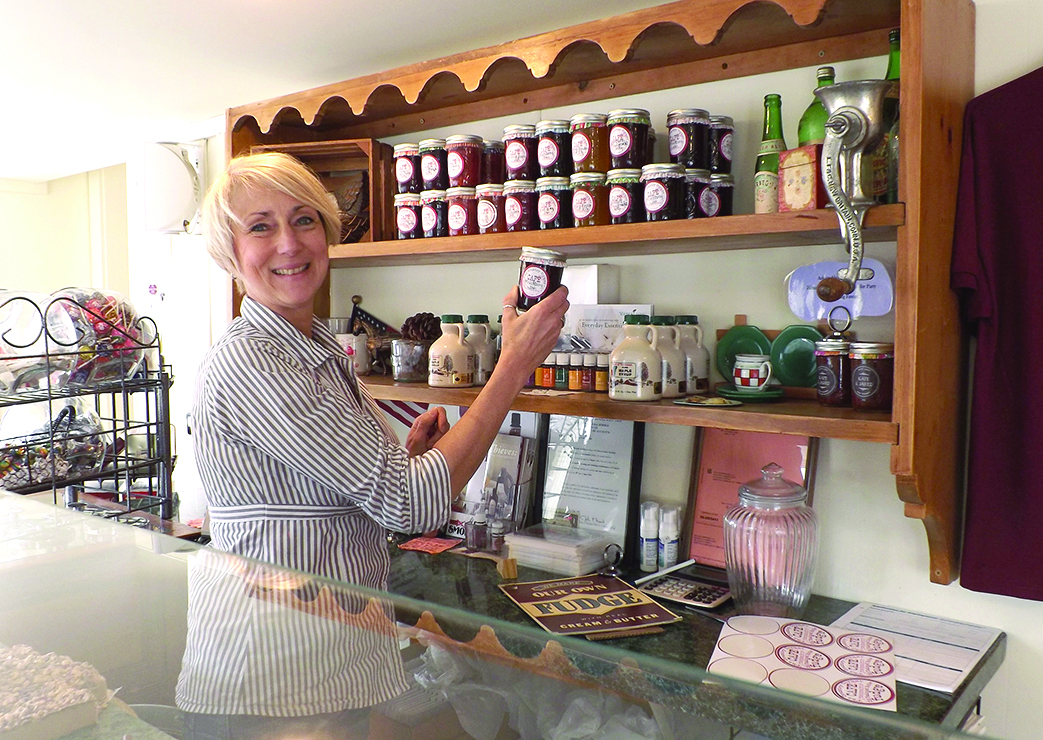 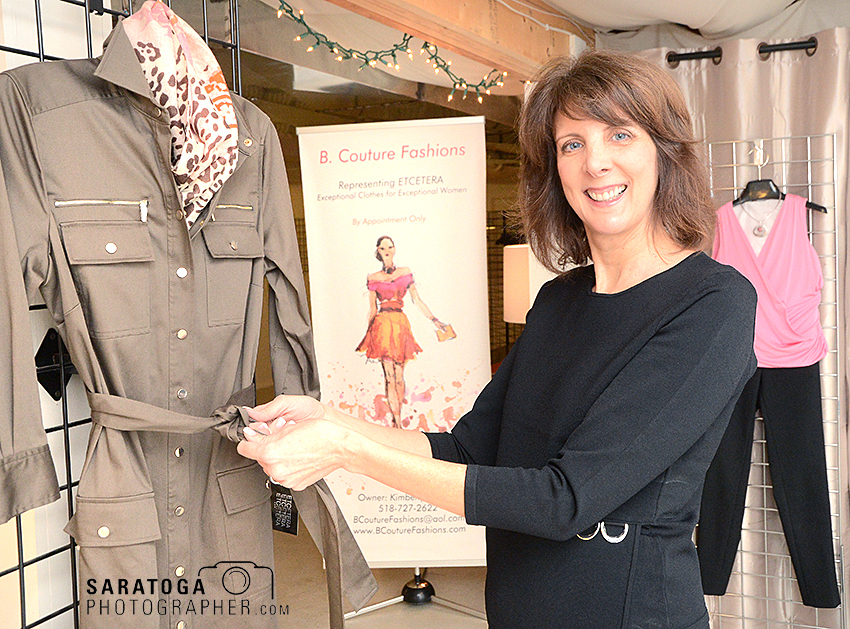 Kimberly Harbour combined her business and marketing expertise with her love of fashion to create a successful retail company, B. Couture Fashions in Ballston Lake.©2016 Saratoga Photographer.com

Kimberly Harbour knows that, regardless of the type of business you own, an understanding of how business works is vital to success.

With B. Couture Fashions in Ballston Lake, Harbour has combined her business and marketing expertise with her love of fashion to create a successful retail company.

B. Couture Fashions carries Carlisle-Etcetera, an exclusive luxury line of clothing and accessories catering to the busy woman who needs to keep current with her wardrobe, but who doesn’t have the time or the inclination to go from department store to department store in search of items that fit and look great.

Harbour, who has a degree in business and marketing from Skidmore College, began her career in retail, and later opened her own public relations firm. She was a longtime client of B. Couture before she was approached by the former owner to purchase the business.

She took over in January 2014 and has been doing great ever since. B. Couture already had a loyal following and Harbour continues to attract new customers. Her marketing and PR skills have been a huge help to her in her efforts, but her biggest challenge is getting people to make that initial appointment. 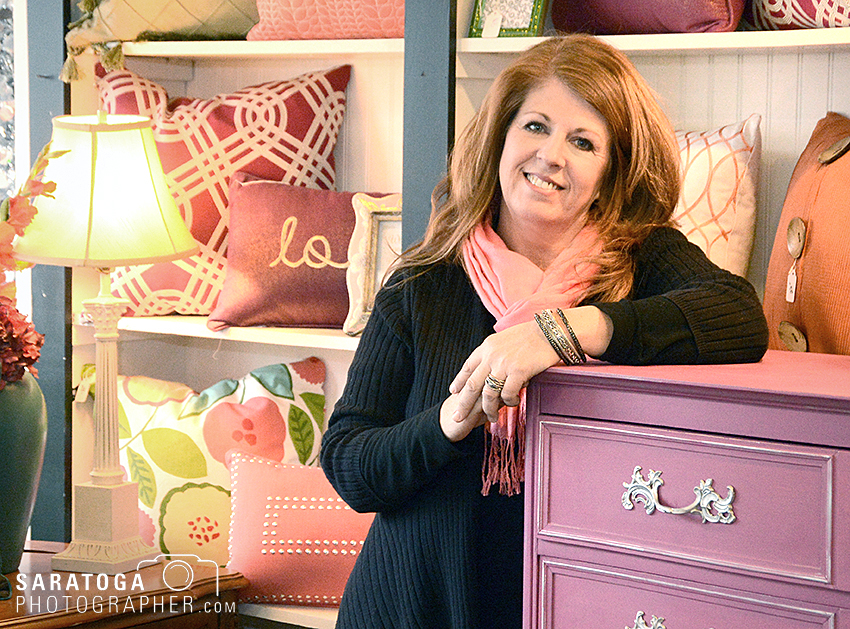 Vicki Ure has been an interior decorator for 25 years, originally occupying space in Malta Commons, but thirteen years ago she moved to the mall in Clifton Park.

Her professional reputation and the popularity of her Victoria’s Corner shop increased rapidly, prompting expansion to a second studio at 20 Learned St. in Albany in March 2015.

Last July, she opened a third studio in Glens Falls.

In 2003, Ure left the mall and worked out of her home for about seven years in order to raise her family and care for her mother.

In 2013, She decided to open Victoria’s Corner at 252 Milton Ave. in Ballston Spa. It proved to be an ideal location for Ure, especially since her services have expanded to include reviving and re-purposing old and heirloom furnishings and accessories. Ballston Spa is a popular destination for antiques and antiques lovers.

Ure offers a complete menu of design and interior decorating services at all of her locations, including custom window treatments, upholstery and slipcovers, as well as refurbishing, reviving, and reinventing old furniture, lamps, dishware, and other decorative accessories.

“Serving as a leader of the New York State Advisory Council on Military Education is a great honor,” said Drindak. “New York state veteran and military students, and their dependents, have done so much for our nation and they deserve to be represented in statewide discussions on higher education.”

• Evaluating and restructuring policies related to acceptance and transfer of credit for veterans, military students and their adult family members.

• Enhancing the educational aspirations of the military populations in the state.

Applications for the scholarship must be submitted by March 7.

Applicants must: be a member in good standing with First New York Federal Credit Union, be a graduating high school senior, plan to attend an accredited two- or four-year college and be active or volunteer within their community.

“We take great pride is helping students reach their educational, career and financial goals. As a teachers’ credit union, we will continue to do all we can to help them now and throughout their lives,” said Lucy Halstead, president/CEO for First New York Federal Credit Union. 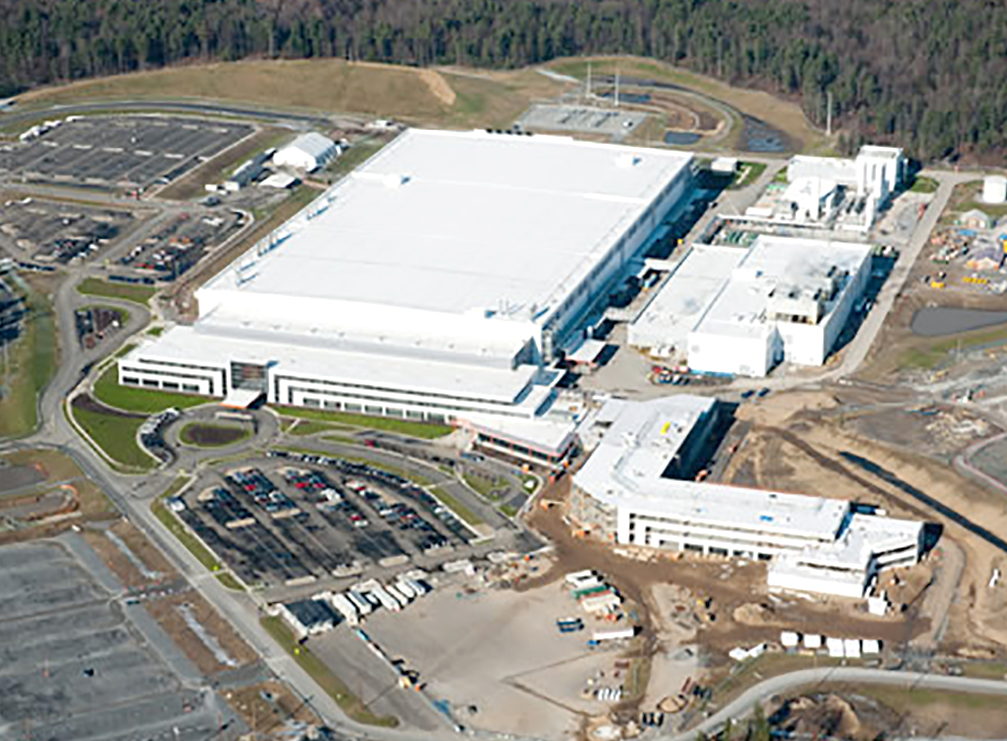 The GlobalFoundries Fab 8 plant in Malta is one of the economic development success stories in Saratoga County in recent years. It has spawned other businesses and education initiatives.Courtesy GlobalFoundries

Those dollars are spent at store and shops, restaurants and via business-to-business relationships that turn the economic wheel and generate incomes vital to people’s lives.

A great deal of time is spent by professionals to enhance development by bringing in new businesses and new jobs. Those groups–development agencies, business and professional associations, chambers of commerce–also help existing businesses stay afloat, expand and thrive.

Professionals in the field, like Marty Vanags president of the Saratoga County Prosperity Partnership, know their work is never done.

Even large successes, like landing the international microchip manufacturer GlobalFoundries, doesn’t mean a community lives happily ever after.

Economic development groups can’t rest on their laurels. “You have to constantly push the ball forward,” he said, using a basketball analogy. “Be happy about our wins, but try to score as often as we can and use every opportunity to do that.”