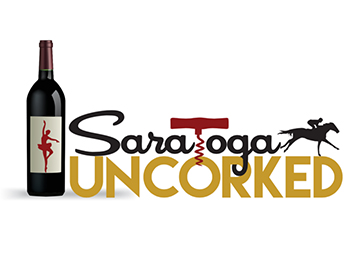 Saratoga UnCorked, logo depicted here, will be a multi-day celebration of fine wine, gourmet cuisine, wellness and entertainment held for the first time in July.Courtesy Saratoga Convention and Tourism Bureau

Townsquare Lifestyle Events in Saratoga Springs, in partnership with the Saratoga Convention and Tourism Bureau (SCTB), announced plans to hold a wine and food festival in July.

Saratoga UnCorked will be a multi-day celebration of fine wine, gourmet cuisine, wellness and entertainment, officials said. It will serve as a kick-off to the racing season at Saratoga Race Course and give travelers and locals a chance to experience what the Spa City has to offer.

“We are thrilled to partner with the SCTB to launch Saratoga Uncorked, said AJ Bodden, Vice President, Townsquare Lifestyle Events. “There is no place better than Saratoga in the summer to host this world class, epicurean-focused event, showcasing the city’s most appealing and unique assets. We are extremely fortunate to have such unique and diverse attractions to offer and it’s a great honor to be involved with bringing new visitors to the area.” 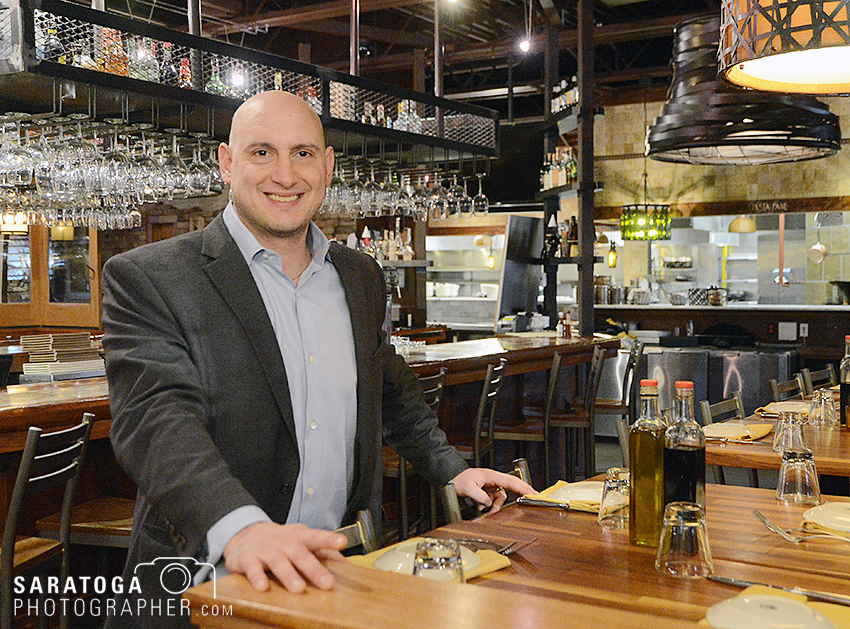 He said he plans no major changes.

Porreca has been a “passionate chef for 20 years. It’s something that I love to do.”

For most of that time, he has been cooking at the Clifton Park bistro he now owns at 18 Park Ave.

He and his wife, Nicole, took a three-year hiatus in Hawaii, where he was a chef at the Four Seasons Hotel in Maui. While in Maui, the Porrecas had twins, Sonny and Liea, now two years old. They returned to Clifton Park because, he said, it is their “home base” and family and support systems became more important with two small children to raise. 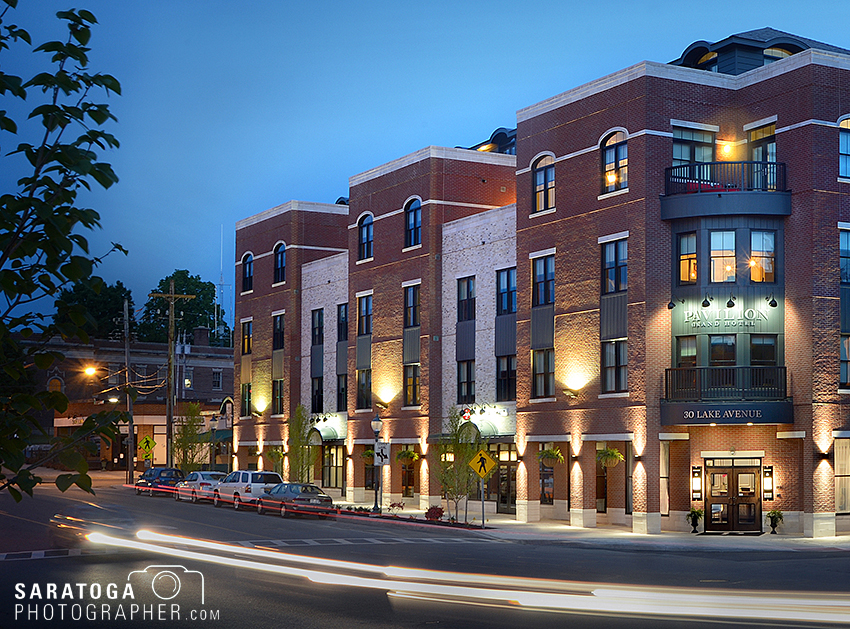 The Pavilion Grand Hotel on Lake Avenue in Saratoga Springs hired Mazzone Hospitality to oversee operations of a new restaurant inside the hotel. A May opening is expected.
The restaurant is currently in development and is anticipated to open late May, hotel officials said.©2016 Saratoga Photographer.com

The Pavilion Grand Hotel on Lake Avenue in Saratoga Springs has hired Mazzone Hospitality to oversee operations of a new restaurant inside the hotel.

The restaurant is currently in development and is anticipated to open perhaps in June, hotel officials said.

Officials at Mazzone Hospitality said it will be named Fish at 30 Lake and it will offer fresh seafood, grilled fish and pizza and a raw bar.

The restaurant space on the ground floor of the facility had been occupied by a restaurant called Mingle on the Avenue, owned by Jose Filomeno. That was short-lived, and the restaurant closed early this year.

The restaurant, situated at the corner of Lake Avenue and Pavilion Place, will feature outdoor sidewalk dining at its ground floor location next to the main entrance of Pavilion Grand Hotel, officials said.

Mazzone Hospitality’s newest addition to the region’s culinary scene is expected to open at 2 p.m. daily for light fair and cocktails with dinner service beginning at 5:30 p.m. The restaurant will open for Sunday dinner service at 3 p.m. 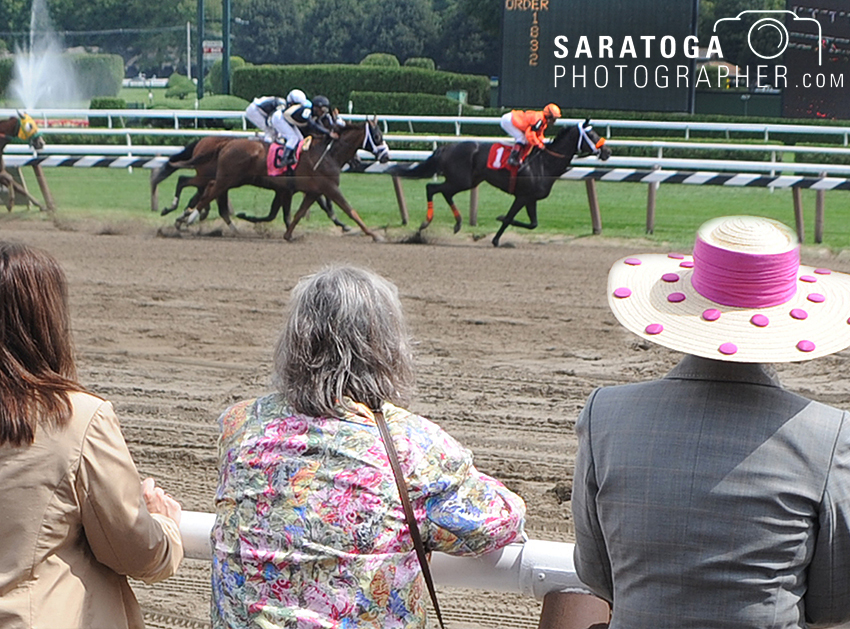 Horses charge to the finish line at historic Saratoga Race Track in Saratoga Springs. Season tickets and other passes are now on sale for the 2016 season that begins July 22.©2016 Saratoga Photographer.com

Daily reserved seats may be purchased through Ticketmaster.com beginning Tuesday, May 3, at 10 a.m.

All tickets to new subscribers will be sold on a first-come, first-served basis, according to available inventory, NYRA officials said.

All reserved seats purchased in advance include admission. Full-season plans include 40 days of admission based on the cost of a season pass. 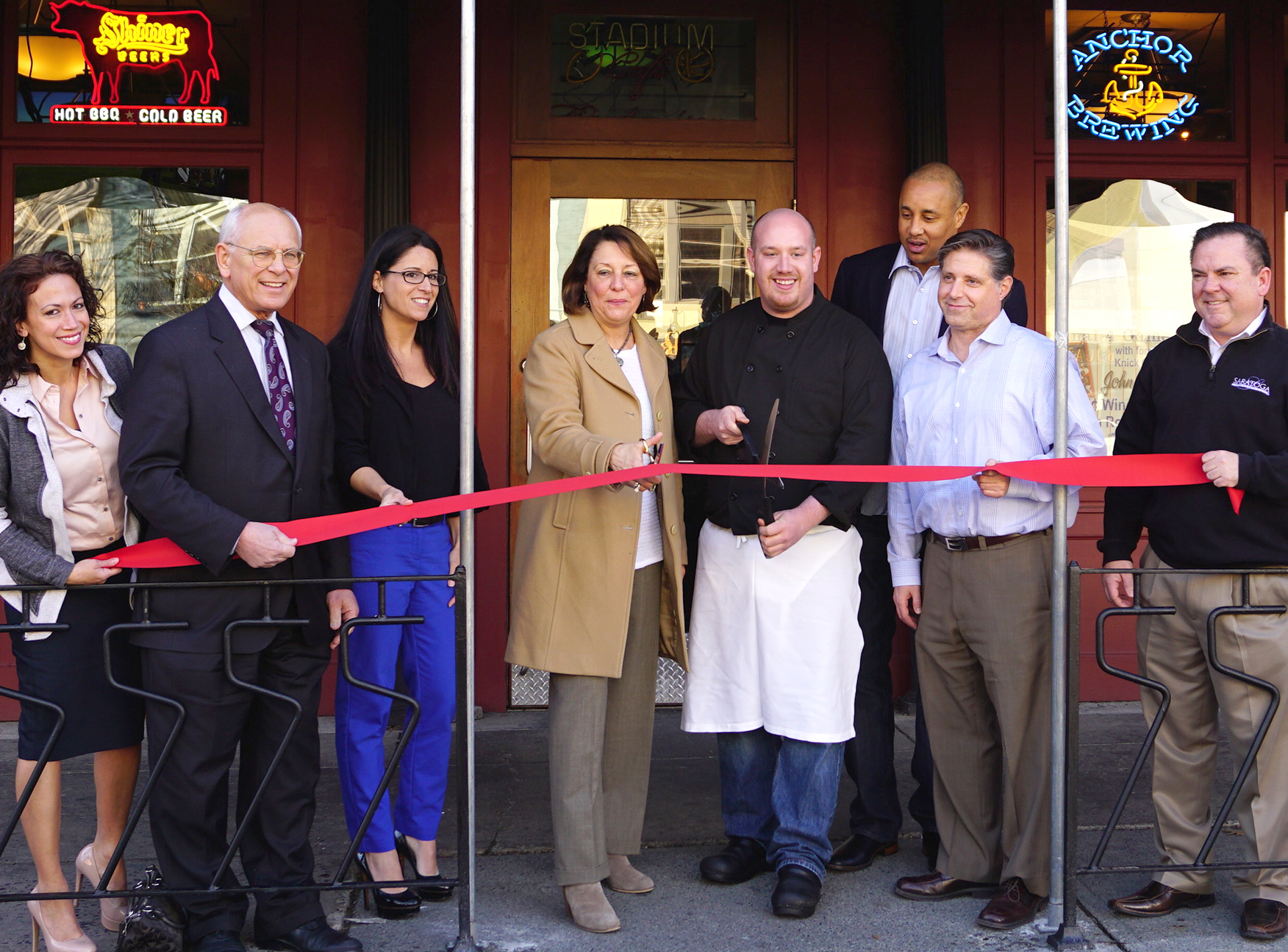 The Saratoga Stadium held a ribbon cutting on April 4. The establishment on Broadway in Saratoga Springs has new owners and went through some renovation work before re-opening.

The Saratoga Stadium, formerly known as Stadium CafÃ©, on Broadway in Saratoga Springs is under new ownership.

Dave Harmon, who has owned and operated the restaurant for the past 14 years, recently sold the restaurant to Saratoga Hospitality LLC, which owns two other establishments in downtown Saratoga Springs: Max London’s Restaurant and Mrs. London’s Bakery and CafÃ©.

The restaurant at 389 Broadway reopened as Saratoga Stadium on March 17.

The establishment celebrated its grand re-opening on April with a ribbon cutting attended by local elected officials and former NBA star John Starks.

Saratoga Stadium will feature an American tavern-style menu in a sports bar-themed atmosphere.

A study conducted annually by the University of Wisconsin’s Population Health Institute has ranked Saratoga County as the top healthiest county in New York state.

The study is funded by the Robert Wood Johnson Foundation. In 2013 an 2014, Saratoga County ranked number 5, as well as ranking number 3 for health outcomes in 2015.

“We want to applaud everyone in our community that has done something positive in their jobs or in their personal lives to make our county and themselves healthier,” said Susan Halstead of Family Vision Care Center, chairwoman of the Chamber’s Health and Wellness Council. “Being the number 1 healthiest county in all of New York state is something we can all be proud of because it represents the work and commitment to wellness of so many organizations and people.”

In 2013, the board of directors authorized the formation of the Health and Wellness Council. In 2014, the council decided to celebrate June as Employee Wellness Month. They organized a series of #healthysaratoga events. The council’s mission statement for the #healthysaratoga movement is “Ensure Saratoga County is one of the healthiest places to live and work.”

Since that time, the council created a new Health & Wellness Week in January; the #healthysaratoga HORSE Basketball Challenge in March; a set of events to celebrate Employee Wellness Month in June; and a #healthysaratoga silent disco in October.

The council created a #healthysaratoga pledge program that now has 125 companies as signatories. Each has agreed to take action to ensure Saratoga County is one of the healthiest places to live and work. 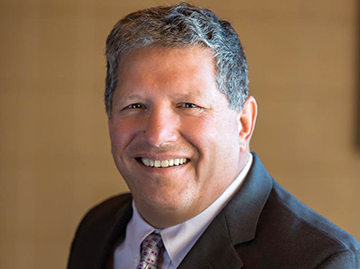 Many area residents, business people and tourists of the area enjoy meals and meetings prepared by teams of his 1,000 employees.

In Saratoga County, his ventures include Angelo’s Prime Bar + Grill in Clifton Park; Prime at Saratoga National at the renowned Saratoga Springs golf club; and the dining facility at the historic Hall of Springs in Spa State Park. Soon, he will run the restaurant at Pavilion Grand Hotel in Saratoga Springs.

Mazzone’s name became established in and around the area long before he invested in the Glen Sanders Mansion in Scotia in 1988. In the early 1970s, he attended Hudson Valley Community College and then transferred to Schenectady County Community College to complete the hotel and restaurant management program. He “met a girl” who later became his wife and the mother of his children. The couple left New York briefly but ultimately came back to the area for work and to open Peggy’s Restaurant on State Street in Schenectady at a time when that city was starting to rebuild its downtown.

“I was part of the redevelopment,” Mazzone said. At that time, Peggy’s was expanding its catering. While he was developing that project, he saw an opportunity at the Glen Sanders Mansion.

“This is the place,” he said. And the decision was made to purchase the property on the Mohawk River. He added two ballrooms and a dining hall to the smaller historic house. 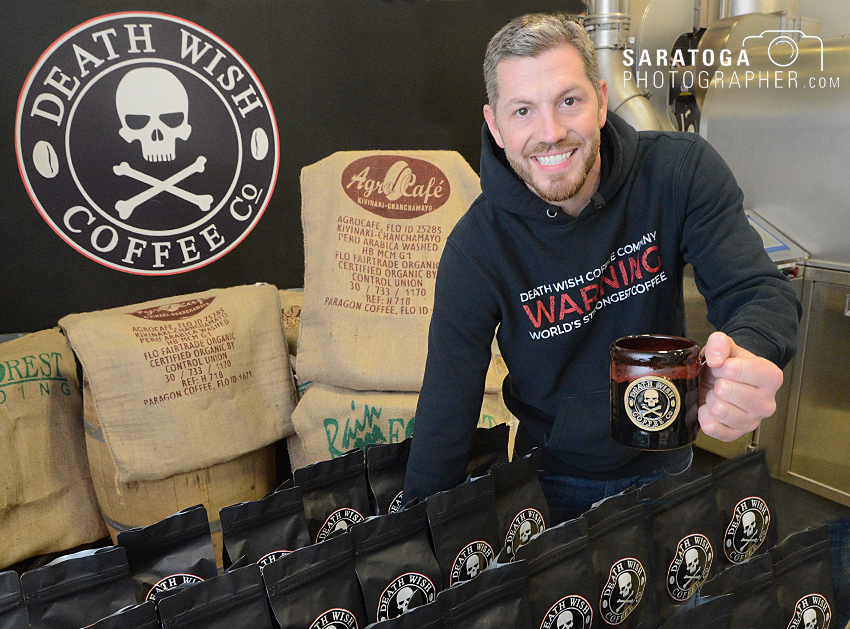 Michael Brown, owner of Death Wish Coffee, has seen a huge boost in production and sales of his product in the wake of a 30-second TV commercial that aired during the Super Bowl.

What a difference 30 seconds can make. Since a 30-second advertisement was televised during the NFL Super Bowl on Feb. 7, Death Wish Coffee in Round Lake has seen its sales multiply three to four times, has increased its staff, ordered new equipment, added new products and rented an additional warehouse, according to company owner Michael Brown.

After an initial surge, things leveled off somewhat but “it’s been holding pretty steady.” The company has more than 2,000 recurring customers and a mailing list of 250,000.

Consequently, Brown said, “I have a lot of big plans.”

He is looking for a larger location so that he can bring all the company’s activities under one roof. Currently, they have four separate warehouses. Most sales now are online but the new location will include a retail outlet. In addition, the coffee is sold at Price Chopper, Hannaford, Healthy Living Market, and Saratoga Coffee Traders. 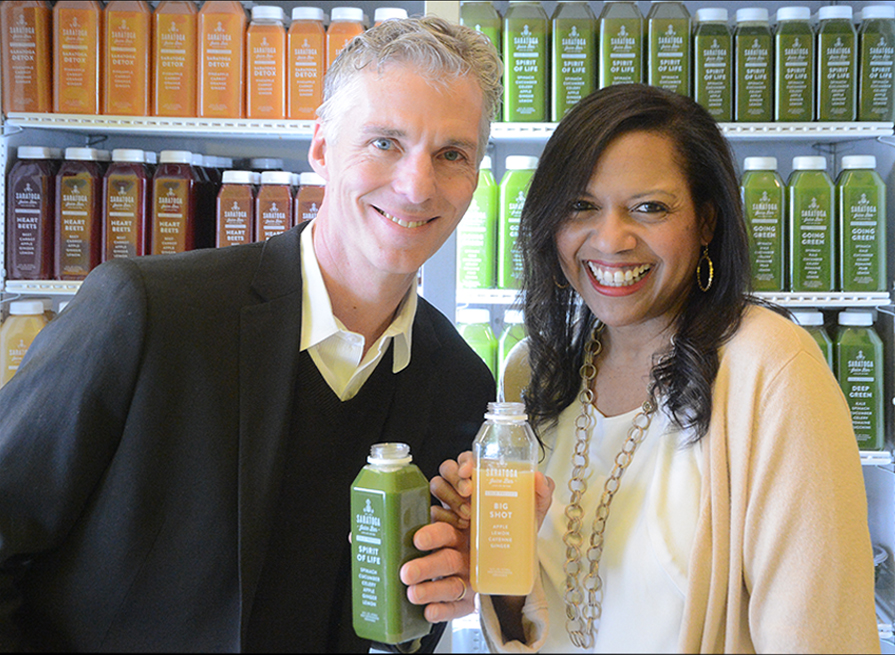 Christel and Colin MacLean have run several businesses in Saratoga Springs and its Saratoga Juice Bar products can now be found in over 100 independent grocery and specialty markets.

Christel and Colin MacLean are not ones to wait for opportunity to knock on their door. The success of their newest business venture, Saratoga Juice Bar, shows their strength as an entrepreneurial team.

The area first got to know the MacLeans as restaurant owners. Christel was living in Manhattan and working on Wall Street when she had a serendipitous encounter with Auntie Moseley, the famous owner of Hattie’s in Saratoga Springs. A year later, Christel became the owner of Hattie’s. Together with Colin, they remained true to the vision and legacy of Hattie’s.

Soon thereafter, they introduced the community to Saratoga Juice Bar, just a few doors down from Circus Café.

Christel calls it another instance of Saratoga serendipity. She and Colin had just completed the purchase of the Crowne Grill and were absorbed in getting that restaurant running, when, to their surprise, the storefront a few doors down suddenly became available. 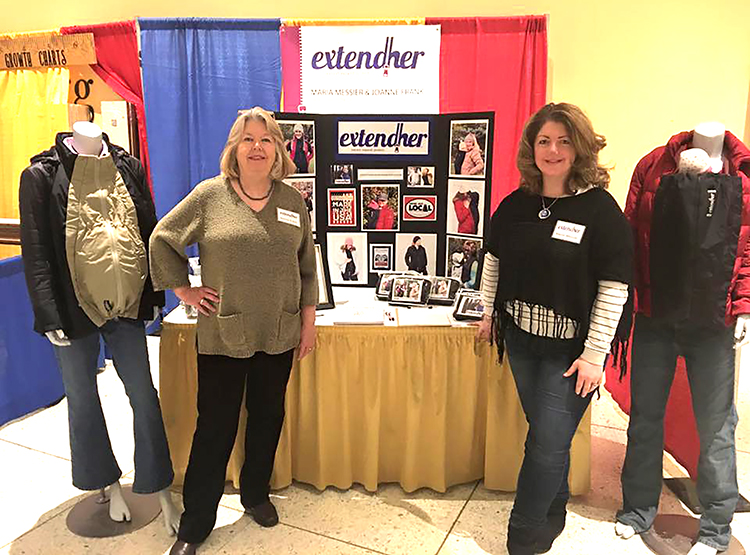 Maria Messier, right, and Joanna Frank developed the Extendher, a jacket extender that widens coats during pregnancy, while keeping the child close and warm.Courtesy of Extendher

A few years back, a pediatric nurse raising one young child and pregnant with her second baby had a dilemma. Her favorite winter coat would not zip up over her growing belly. She went to the coat closet to put on her husband’s jacket and was not pleased how it fit or looked.

Maria Messier, a Saratoga County entrepreneur, said she always had a knack for finding solutions. After finding herself in need of way to expand her coat to fit, she decided to invent a jacket extender for herself and for other expectant mothers to widen their favorite coats during pregnancy. With it, they could stay warm in their current coat and avoid paying for a high-priced, short-lived, maternity jacket.

But like most busy, working mothers, Messier put the idea to the back of her mind.

In the fall of 2013, Messier found out she was expecting twins. She was talking with her aunt, Joanne Frank, a fashion designer by trade with over 40 years of experience. Frank thought she could partner with her niece to see if the idea could become an actual product.

Together, they designed a jacket extender system.

Along the way, they hit some stumbling blocks. Inserting a universal zipper to allow for extra fabric to cover the expanded belly was not as easy as it seemed. It wasn’t feasible until Frank came up with a clip-on idea. They developed a clip process that is patent pending.