The Saratoga County Economic Opportunity Council (EOC) will hold its 27th annual fundraiser, the May Day Spring Fling, 5:30-9 p.m. Wednesday, May 4, at the Canfield Casino in Congress Park, Saratoga Springs.

Attendees will have the opportunity to help support EOC’s new endeavor: a traveling food pantry. The pantry will serve as an outreach vehicle that will visit areas of the county where residents are in need of food as a first point of contact as well as other services such as weatherization.

Anita M. Paley, EOC executive director, said, “Each day, some of our neighbors in Saratoga County have to make a decision about food due to the lack of it, because that money has gone to pay the electric bill, increased co-pays, medicine which is not covered by health insurance, rent, and gas to get to work. Many of the people who seek our help are working and trying to get ahead, but need just that little bit extra to get to the next place. ”

The event is sponsored by Longfellows Restaurant and the Olde Bryan Inn. It will include an open bar tended by VIP bartenders, dinner and dessert stations, a live and silent auction and music by J. Yager.

Paley said the annual fundraiser has been a key event bringing together people with a genuine interest in their community and a strong desire to help others.

She has an associate’s degree with honors from Nassau Community College and graduated from George Washington University with a bachelor’s degree in psychology.

Wilson served in the U.S. Marine Corps in various capacities, most notably as the enlisted Marine Corps liaison to the U.S. House of Representatives. She achieved meritorious promotions to sergeant, receiving an honorable discharge with a Navy Achievement Medal upon leaving the Marine Corps.

She attended Pace University Law School and obtained a juris doctor degree and a position on the Law Review. She began a career with the Suffolk County District Attorney’s office, prosecuting various criminal offenses through trial.

She broadened her legal career as in house counsel to Liberty Mutual and State Farm Insurance Companies. She then became a claims professional in various departments at State Farm. She recently retired after 22 years at State Farm in June 2015.

The hiring brings the number of sales professionals to four and the total staff to 11 full-time and two part-time employees.

A Saratoga native, Cianfarani has worked in the hospitality industry over seven years. After attending Schenectady County Community College, where she completed internships at the Kentucky Derby and Belmont Stakes, she began her hospitality sales and event management career with Total Events Inc.

Cianfarani has planned and executed hundreds of weddings, social events and trade shows in the Capital Region. She volunteers her time at the Stowe Weekend of Hope for cancer survivors and their families.

Murray previously served as marketing manager for the Albany accounting firm SaxBST LLP. He brings over 20 years of marketing and business development experience, with a focus on the professional services arena.

He will manage Whiteman Osterman & Hanna’s marketing activities and work with the marketing team on specific firm and practice area initiatives.

Murray has a master’s degree in business administration from the College of Saint Rose, and a Bachelor of Arts degree in communications from Seton Hall University.

He is responsible for developing and managing commercial banking relationships.

Krasnokutski joined BSNB in 2012 as a senior credit analyst and was promoted to assistant vice president and commercial relationship manager in 2014. He has more than 10 years of experience in the banking industry, including the areas of commercial real estate, commercial and industrial lending and corporate debt restructuring. Krasnokutski earned his bachelor’s degree in business administration from St. Bonaventure University and his master’s in business administration with a concentration in finance from Cleveland State University. 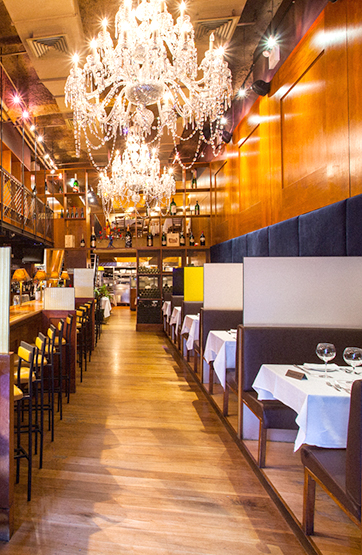 A new restaurant called Seven opened in January at the Park Manor Hotel, formerly the Comfort Suites, near Northway Exit 10 in Clifton Park.

The hotel address is 7 Northside Drive, hence the name. Described as an American bistro, Seven serves breakfast, lunch and dinner in a space with a bistro-influenced decor. It replaces what had been a small breakfast area, now expanded and re-decorated.

It is open to the public, not just hotel patrons.

The menu is “ever-changing, ever-evolving,” he said, noting it has been revamped six times since January as chef Tyler Mullins tries out new recipes and seeks feedback from the clientele.