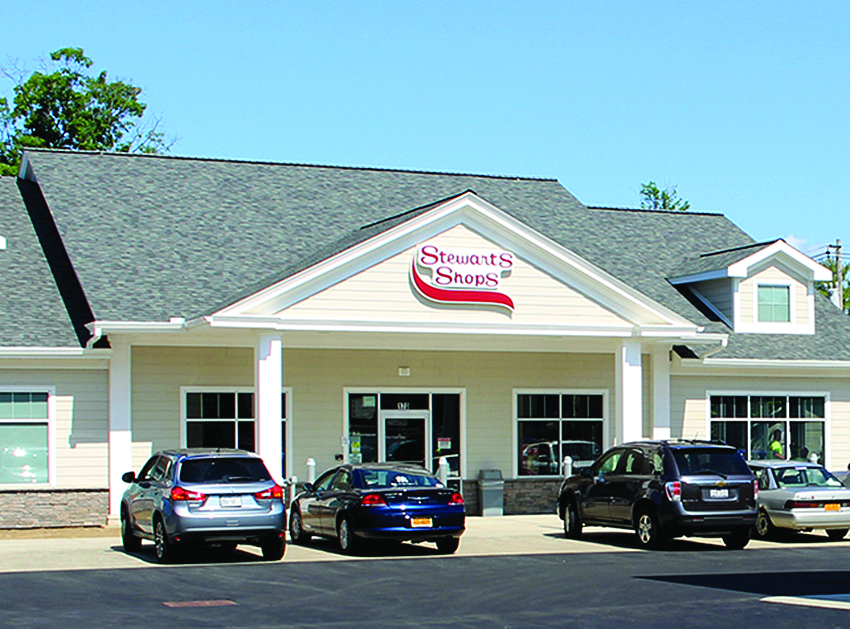 Stewart’s Corp. completely renovated this shop on Church Avenue in Ballston Spa on the site of its original store opened 70 years ago. The new store supports its expanded food products.

Stewart’s Corp. is commemorating the 70th anniversary of the original Stewart’s Shop opening on Church Avenue in the village of Ballston Spa. Day-long festivities are scheduled for July 9, including food and even Helicopter ride give-aways.

The company’s construction team completely renovated and expanded the shop, including an updated exterior that is a total departure from the familiar brown mansard shingles seen at locations throughout upstate New York and Vermont.

The interior space of the new store is more expansive, with additional counter and cooler space to accommodate the company’s growing food and beverage lines. There are additional gasoline pumps and parking in front.

This is only one of many anticipated renovations, expansions and construction of new shops in the works for the next several years, and is a strategic response to the ever-changing needs of consumers in the upstate region.

The corporate philosophy of responsiveness to the customer began with C.V. and Percy Dake as far back as 1917, when they took over the family dairy farm. It continues today under the guidance of Gary Dake, president of Stewart’s Corp., and Bill Dake, chairman of the board.

In 1945, C.V. and Percy Dake purchased the Stewart’s Dairy & Ice Cream Co. in Ballston Spa from Don Stewart. Because state licensing laws of the time limited which townships a dairy could sell their milk in, purchasing the Stewart’s company allowed the Dakes to expand their milk operations. At the time of the purchase, Don Stewart had a small ice cream manufacturing facility on Route 50, owned and operated by the Stewart family since 1918.

The ice cream part of the operation, which included a freezer and a hardening room, had been forced to close during World War I because of a sugar shortage. When C.V.’s son, Charlie, returned from the war later that year, he became very interested in re-opening the ice cream side of the business.

As a veteran, young Charlie had early access to sweetened condensed milk. This allowed him to produce ice cream during his summers off from Cornell, where he was attending school. It wasn’t long before the Dakes opened their first ice cream store on Church Avenue in Ballston Spa.

Both ice cream production and milk bottling operations continued to grow and, by the time young Charlie left Cornell in 1946, the Dakes had opened several more ice cream shops. Charlie, who majored in economics, continued to be involved in the ice cream side of things. Along with his new wife, Philly, they developed strategies to grow the business.

“One of the things many people don’t know is that Stewart’s came up with the idea of selling ice cream in a rectangular package,” said Bill Dake. “Instead of the smaller quart-and-a half-size you’d buy in the grocery store, ours was a full two quarts.”

Charlie Dake came up with the idea to deliver ice cream directly to homes. The company had panel trucks with wooden freezer cabinets full of ice cream. They would slide the wooden chests onto the trucks and hit the road.

“I remember doing this as a kid in the early to mid-50s,” Bill Dake said. “I learned more going door to door selling ice cream than doing just about anything else.”

Another idea came from Philly Dake. The daughter of a Maine potato baron, she was a Cornell coed when she met Charlie. Philly’s idea was to let the customers make their own sundaes just the way they wanted them and free up the employees to do other tasks. Stewart’s “make your own sundae” was born and remains popular today.

During the 1950s, Stewart’s expanded the number of shops, initially renting the locations and later purchasing them. In 1950, they incorporated Saratoga Dairy Inc. and Stewart’s Ice Cream Co. Inc. That year also saw the relocation of the ice cream plant to the “big barn” in Greenfield. Now, both the milk bottling and ice cream manufacturing were under one roof.

Today, there are 331 shops across upstate New York and southern Vermont, generating $1.6 billion in annual sales, according to the company.

“When we think of the local neighborhood Stewart’s Shops, different things come to mind for different people,” said Bill Dake. “Some people immediately think of delicious ice cream cones, sundaes and dairy-fresh milk. Others think of local eggs from nearby Thomas Poultry Farm. And yet others imagine a quick and tasty meal on the go, like chili, hot dogs, or a fresh sandwich while stopping for a tank of gas.”

Stewart’s employees also benefit from a corporate philosophy that understands success is driven by the people who work in the shops, at the plant or behind the wheel of a delivery truck.

The company has an employee stock ownership plan.

“When people have an ownership stake in the business, they develop a sense of unity, empowerment, and pride in their work,” said Gary Dake. “ESOP means that the driver has a stake in the success of the store. For example, if a driver sees that the store manager is busy and a product is low on a shelf, he’ll take the time and stock the shelf for that manager. The same is true for the maintenance guy in the plant. We all work hard at making the business successful for each other.”

Unlike traditional 401K plans, the ESOP program is 100 percent company paid and contributions into the plan are based upon year end company performance. Currently, Stewart’s contributes approximately $9 million annually into the plan, officials said.

Stewart’s also embraces a philosophy of giving back to the communities that have supported them. Contributions from the Stewart’s and the Dake Family Foundations total approximately $7 million dollars annually. In addition, members of the Dake Family have served as board members of many local and regional organizations, including the Regional YMCA, St. Peter’s Healthcare, Siena College, and SPAC.

Stewart’s means different things to different people. Regional Manager Bill Triolla began his career nearly 34 years ago at the Church Avenue location and said he still enjoys stopping by to say hello, knowing he will see people coming in for eggs and milk whom he has known since they were children, coming in for an ice cream cone with their parents.

“Stewart’s Shops fill an important role in the fabric of this community,” he said. “I see that same feeling of ‘community’ in so many of the stores I visit each week as I travel throughout the region.”