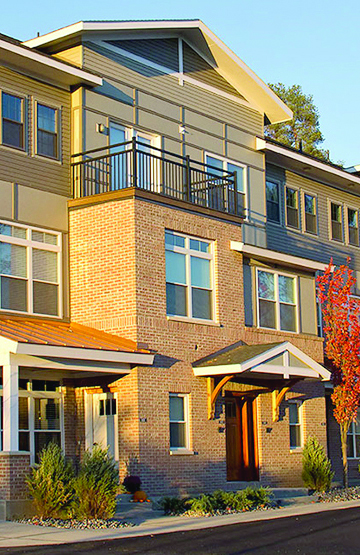 "But, we had the first 122 units pre-leased before construction was complete," he said.

The apartments have open floor plans, with half-bathrooms on the first floor, stainless steel and granite in the kitchens, second floor washers and dryers, as well as a second-floor lofted den/office space. The apartments also feature private patios and front porches.

The community area includes an indoor pool and fireside spa, a great room with a billiards table and bar area, as well as two gyms–one containing aerobics and weight equipment, and the other, an open room where residents can access popular exercise videos.

Hayes, whose background is in banking and finance, left that industry in 2011 to pursue real estate development full-time. Since that time, the company's projects include Highpointe at Malta, a commercial office space, Cold Freezer & Storage in Halfmoon, as well as private homes throughout the area and in Lake George.

According to its website, Hayes Development's portfolio currently consists of more than 400,000 square feet and their tenant partners range from small local businesses to Fortune 500 companies.

The general contractor for the Lofts at Saratoga BLVD is Trinity Building + Construction Management Corporation, with offices in Massachusetts and New York.