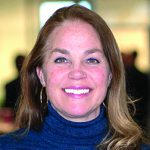 Berkshire Hathaway Home Services Blake Realtors announced that Mary Ellen Boese has joined the staff as a licensed real estate agent.
Boese has lived and worked in Saratoga Springs for more than 20 years.
She received her masters in business administration degree from Sage graduate school.
Boese is an active outdoor enthusiast. She resides in Saratoga Springs with her daughter and son. 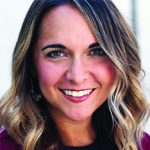 Seeley Office Systems has hired Ashtin Givens as a business development specialist.
Givens brings with her nearly six years of experience in business development and client management. She has worked in many different industries and has helped support organizations both big and small.
She holds a B.S. in human development and family relations from SUNY Plattsburgh.
In her roles prior to joining Seeley Office Systems, Givens was responsible for cultivating new business relationships in the greater Capital Region.

Elliot Edwards has been named vice president of retail banking at Ballston Spa National Bank (BSNB).
Edwards will oversee customer service and sales initiatives for the retail banking department and manage retail deposit activities in support of the bank’s overall goals and strategic initiatives.
Edwards brings past banking industry experience to his new role. Working in the Capital Region for a national financial institution, he gained experience as a financial center manager and as a facilitator of a new hire sales and operations training curriculum.
Most recently, Edwards was responsible for driving client engagement strategies, deepening client relationships and managing client experience as a vice president, consumer banking market leader. He earned an undergraduate degree from SUNY Oswego and is an active volunteer at BSNB-hosted drive-thru food pantries benefitting the Regional Food Bank of NENY. 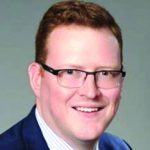 KeyBank announced that Sean T. Wade been named vice president and relationship, commercial banking, for the Capital Region.
In his role, he is responsible for business development, portfolio management and acting as trusted advisor for commercial banking clients throughout the Capital Region.
Prior to joining KeyBank, Wade worked for Pioneer Bank as a commercial banking relationship manager. He has also worked for NYBDC as a credit analyst and Trustco Bank as a branch manager. He has 11 years of experience in the financial services industry.
Wade earned his bachelor’s degree from Union College in Schenectady. He is also a graduate of Rensselaer County Regional Chamber of Commerce’s Leadership Institute.

* * *
Dr. Catelyn Halusic-Smith has joined Saratoga OB/GYN, the obstetrics-gynecology practice that is part of Saratoga Hospital Medical Group.
She is the latest addition to a growing team of physicians, certified nurse-midwives and nurse practitioners who provide comprehensive women’s health services to patients from adolescence through the post-menopause years. Along with Saratoga Hospital Medical Group – Midwifery & Women’s Health services, Saratoga OB/GYN supports Saratoga Hospital’s collaborative physician-midwife childbirth care model.
Four physicians have joined Saratoga OB/GYN since 2018. Two practice members recently earned accreditation as surgeons of excellence in minimally invasive gynecology, earning Saratoga Hospital the distinction of being Northeastern New York’s only Center of Excellence in that specialty.
Halusic-Smith earned her Doctor of Osteopathic Medicine from New York Institute of Technology College of Osteopathic Medicine in Westbury, N.Y. She completed a residency in obstetrics and gynecology at Mount Sinai South Nassau in Oceanside, N.Y. 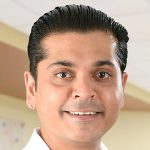 Dr. Sidharth Jogani has joined Saratoga Hospital Medical Group – Pulmonology and Sleep Medicine.
He specializes in treating breathing-related conditions and providing inpatient critical care.
Jogani comes to Saratoga Hospital from Northwest Medical Center in Bentonville, Ark. After earning a medical degree from Rural Medical College of Pravara Medical Trust in India, he completed an internship and residency at SUNY Upstate Medical University in Syracuse and a fellowship at Albany Medical Center.
Jogani is board certified in internal medicine with subspecialty certifications in critical care medicine and pulmonary disease.

The Trucking Association of New York (TANY) Safety Maintenance Management Council awarded Michael Brutsch, a diesel technician for Kenworth Northeast Group Inc. in Clifton Park, with the New York State 2019 Statewide Golden Wrench Award.
The award was established to recognize the outstanding efforts and achievements and outside contributions of heavy diesel technicians who work behind the scenes to ensure commercial motor vehicles are safe on the road. Consideration for the award is given to those who exemplify professionalism, possess a commitment to safety as well as professional development, and set an example for others both in and outside their field.
Brutsch has been a technician for 45 years, eight of which have been with Kenworth, and holds multiple automotive service excellence certifications as well as certificates for training from Paccar and Cummins. He has competed in the TANY SuperTech Competition bringing home first, second and third place category finishes.