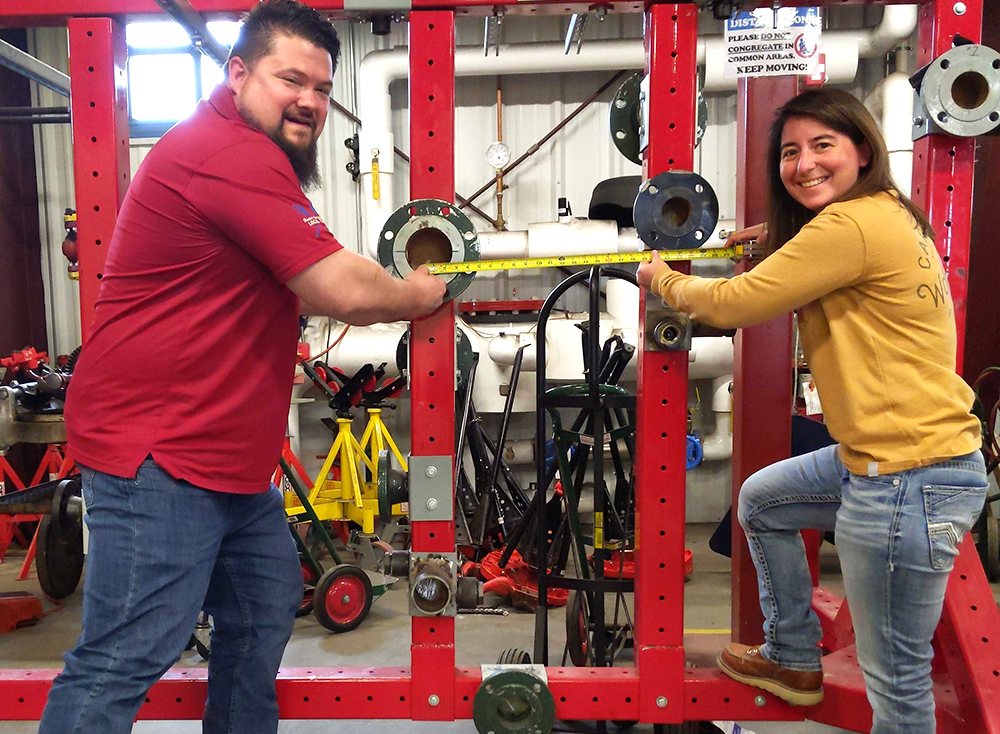 Queensbury native Ashley Cirelli was working in the restaurant industry before joining the apprentice program at UA Plumbers and Steamfitters Local 773 in 2015. She is one of more than 450 members of the Queensbury-based union.

“I was working in the restaurant business, but there was no stability. You can make great money, but there’s no retirement or health insurance unless you get it on your own,” said Cirelli whose family has  owned several local restaurants including Cirelli’s Jam ‘n Eggs in South Glens Falls.

After learning about the excellent pay and benefit packages available to union apprentices, she decided to apply to the electrician apprentice program at UA Local 236 in Albany. Her plans changed after a chance meeting with Larry Bulman, director of legislative and political affairs for the United Association of Plumbers and Steamfitters, that took place at her parents’ restaurant.

After he told her about the career opportunities available to her as an apprentice at Local 773, she applied and was accepted into the program. In August 2015, she started working at GlobalFoundries as a union apprentice. For her, the job was a perfect fit.

“I’ve been very hands-on my entire life. I helped my dad fix cars when I was young, and I used to build computers” she said. “I always wanted to do something in the trades and almost got into the military. But in high school, I was always told you need to go to college no matter what.”

Cirelli did attend college for 18 months after graduating from high school in 2007. She took business management and marketing classes at SUNY Adirondack but never completed her degree.

Although there is an aptitude test that all apprentice program applicants must take, no special skills are required in order to get accepted into the program.

“You don’t have to have any mechanical inclination at all. Your schooling is hands-on training. They teach you from the very basics of how to turn a wrench all the way up to the advanced skills,” she said. “And as soon as you sign the paperwork, they get you working. You work five days a week for at least 40 hours a week, and you go to school three nights a week for five years.

“You are earning a living while going to school, and they are paying for the school. The only thing you have to pay for is union dues and books. Other than that, they pay for everything. ”

She completed the union’s five-year apprenticeship and became the program’s first and only female graduate. There are currently  three other women working and currently enrolled in various stages of the program.

According to  Cirelli, working in a male dominated profession is not without its challenges.

“The hardest thing was definitely being told that you’re a female and this is a man’s world. But once I got comfortable and gave it right back to them, they were okay with it. You have to prove yourself more as a woman. But times are changing.”

Cirelli is heavily involved in the union’s efforts to attract more women apprentices and promote skilled trade careers to high school students. She is a member of  Local 773’s political action committee and travels to local school districts to meet with students.

She also participates in the UA’s Tradeswomen Build Nations Conference. The annual conference draws thousands of union tradeswomen from all different professions and typically involves a charity build project for Habitat for Humanity or another non-profit. Cirelli plans to travel to this year’s conference in New Orleans.

After completing a long-term assignment at Global Foundries where she was the foreman overseeing a crew of eleven men, Cirelli recently accepted a three-year position as the regional organizer with New York State Pipes Trades Association. She was one of 46 people interviewed for the job.

“This is a stepping stone,” she said. “My goal is to work for the United Association at the headquarters in Annapolis, Maryland.”

As regional organizer, Cirelli’s territory is extensive and extends north to the Canadian border. It reaches west to Binghamton and south towards the Hudson Valley. As part of her job, she travels to job sites that employ both union and non-union workers.

“My job is to talk to the workers and make sure they are getting prevailing wages. I’m also making sure companies are following the proper procedures and labor laws. When a contractor is not doing that, you open up a formal investigation,” she said.

At non-union sites, she encourages workers and companies to consider joining the union.

“Right now, contractors are having a really hard time finding reliable workers. When you join a union as a company, the union hall itself gets you the workers you need. You never have to worry about having to find people. We employ them for you,” Cirellii said.

Application for Local 773’s apprentice program are accepted on the second Monday of every month from 8 a.m. to 10 a.m. Between 15-30 apprentices are accepted into the program each year.

First year apprentices at Local 773 earn a salary and benefit package that totals almost $100,000 a year. The starting salary is approximately $19 per hour, and wages increase steadily with experience.

“What you see in your paycheck can be anywhere from $45 to $55,000 as an entry-level person who has never done this in your life,” said Cirelli. “But you’re not just joining 773 to get the pay and benefits. It’s a giant family, and you feel so welcome when you are in it. It really is a brotherhood and sisterhood.”