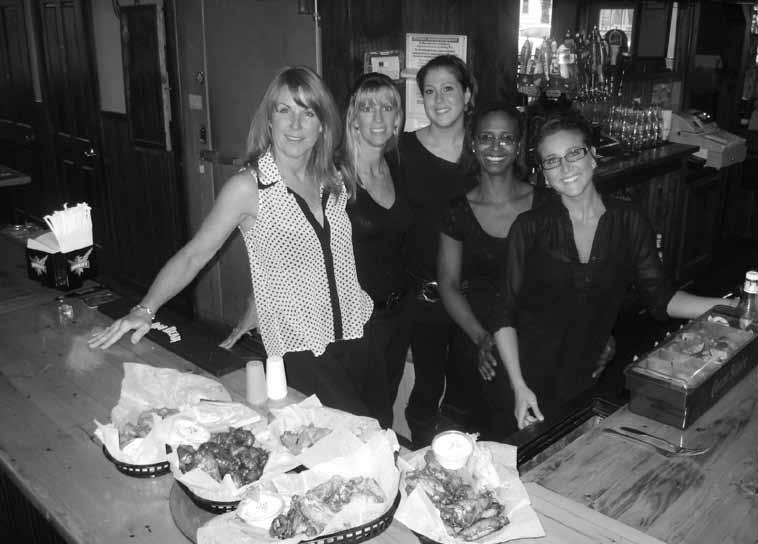 Staff at Dango’s in Corinth poses behind an array of foods, including chicken wings, at the new sports bar and restaurant that features some 30 TVs for watching the games

Dave Johnson, the owner of Dango Fitzgerald’s
Irish Pub at 38 Caroline St. in Saratoga
Springs, and a group of similar establishments
to the north, has added yet another Dango’s to
his restaurant holdings.

Johnson opened his newest venture at
the site of the former Des & Dil’s on Palmer
Avenue in Corinth in March on St. Patrick’s
Day weekend.

Johnson said people from Corinth have been
coming over Glens Falls and Wilton Mountain
roads for quite a while to visit his other establishments
and that he’s been scouting around
for a Corinth location for a few years. The new
location didn’t require much more than some
painting, some attention to the floors and a little
electrical work in order to get it ready to open.

Johnson is the owner of Dango’s at 158 Maple St. in Glens Falls (newly remodeled), Dango’s Dugout (formerly Russo’s) and Abbott’s at 43 Main St. in South Glens Falls and Fitzgerald’s Steak House, a little further south by Exit 17, at 1393 Route 9, South Glens Falls. Johnson is a partner with Tony Poulos in the Irish Pub, Irish Pizza, and the Casino Pub, all on South Street in Glens Falls.

The great-grandson of the proprietor of the first local Fitzgerald’s establishment, a hotel located at the top of Glen Street Hill (approximately at the site of the Civic Center marquee) until it was destroyed by fire in the 1940s, Johnson is a fourth-generation family member in the restaurant/pub business.

The Dango’s are all Irish pubs/sports bars/ steakhouses, with a reputation for generous portions and great chicken wings. (Wing night in Corinth is Thursdays.)

The newest location features 30 TVs, including eight behind the bar, and one in each booth. Beyond steaks, the Corinth Dango’s will offer soups and salads, seafood, Italian dishes, pub fare and subs. Pizza will become available at the new location this summer. In the meantime, there are choices from an eight-page menu.

There’s seating for about 100 and Johnson has been glad to see a mix of people of all ages, families with kids and some older people, as customers.

Live entertainment comes on the weekends. Dango’s opens at 11 a.m. Scheduled closing time is 11 p.m., but that gets stretched into the wee hours if the crowd is right. The bands start around 9 p.m.

Johnson is proud to be descended from a family with historic connections to Glens Falls. His great-uncle was a friend of Gov. Al Smith. Johnson’s father, called Dango, reopened Fitzgerald’s at its present location. Dave Johnson’s son, Sean, age 20, works in his father’s businesses when he’s home from his studies at Florida State.

A website for Dave Johnson’s group of restaurants is under construction.