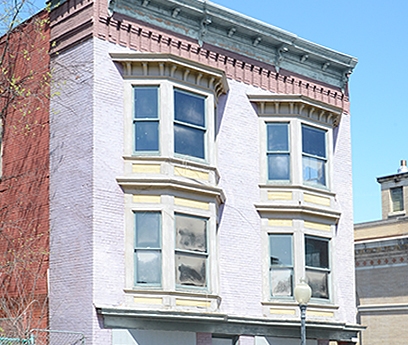 This structure at 15 Church St. in Saratoga Springs, just west of Broadway, has been vacant for many years but work will commence soon to turn it into a high-end restaurant

There will be activity soon at the vacant and
boarded-up building just off Broadway, next to the
U.S. Post Office.

Burke Brothers Co. of Malta, a firm that owns
or operates 35 Dunkin’ Donut franchises and has
done construction projects like the Fox Hollow
subdivision in Clifton Park and developed some
Walgreens stores, bought the building last year.

He charged John Muse of Muse Architect in
Saratoga Springs with the task of designing the new
look for the to get the long-vacant structure. Muse
has over 30 years of experience and has done such
projects as the Carousel Pavilion in Congress Park,
the YMCA of Saratoga, and bank branches for the
Adirondack Trust Co., as well as new residences
in the area.

“It’s really exciting to see something positive happen with that building,” said Muse, noting that, in Burke the project had “somebody come along with the ability to do it.”

It hasn’t been easy, but what Muse has come up with is a first floor restaurant design that will use much of what is already in place, with updates and modernizations where needed, he said. The second and third floor will be single, two-bedroom apartments.

The restaurant will be managed by the husband wife duo of Paul McCullough and Susan Diep. Jason Baker, formerly of Adventure in Food in Menands and of the Wine Bar and Bistro in Albany, has already been selected as the executive chef.

The project has approval of the city’s Design Review Commission and is awaiting further approvals, including the building permit. Muse said the city has been very cooperative. He said work will start once the permit is received, and noted that opening in August “would be the goal,” it’s more accurately “a best-case scenario.”

He said that in his discussions with Burke, the restaurant will be designed as a high-end establishment.

“My sense is, (Burke) really wants a nice, quality place,” Muse said. “There is a need for a high-end restaurant in town. It’s not a pub, not a bar. It’s not that type of place.”

He said Burke sent him to New York City to look at some restaurants to get an idea of what he had in mind. “It will be noticeably different,” he said of the 106-year-old structure whose history going back some decades included a series of luncheonette type businesses.

“I do think it will be one of the nicer places in town.”

According to the Saratoga Preservation Foundation, the building was an extension to Franklin House, a hotel and boarding house that was located immediately west. In 1907, a 23-foot addition was put on the front of the structure, including the big bay windows that still exist.

“The existing building was extremely complex,” Muse said, “and a bit mystifying until I realized the history of it.”

In his initial walk-through, Muse said he found the original facade in the middle of the building.

There were pieces of three different buildings inside the structure. “It was daunting … Reconciling all that is pretty complicated and a lot of work.” In doing so, he had to consider the historic nature of the building, “but guidelines aside, my approach is always trying to respect as much of what is there as possible,” he said. The will be modernization, like access for the handicapped, but “we’ll basically work with what we have” during renovations.

The restaurant will take up 1,500 square feet, including the kitchen, Muse said. There will be a bar area toward the back, then six booths, banquettes and some free-standing tables. Booths will be leather, and there will be a lot of warm dark wood finishing throughout. The walls will have room for nice paintings. In all, seating will be for about 48.

The apartments will be about 1,500 square feet each, minus room for the stairwell. They will have the bay windows and high ceilings, “very pleasant space,” said Muse.

“I’m really impressed with his commitment,” Muse said of the developer. It takes a committed owner to really dig in” to get the project pushed forward. “I think highly of that.”