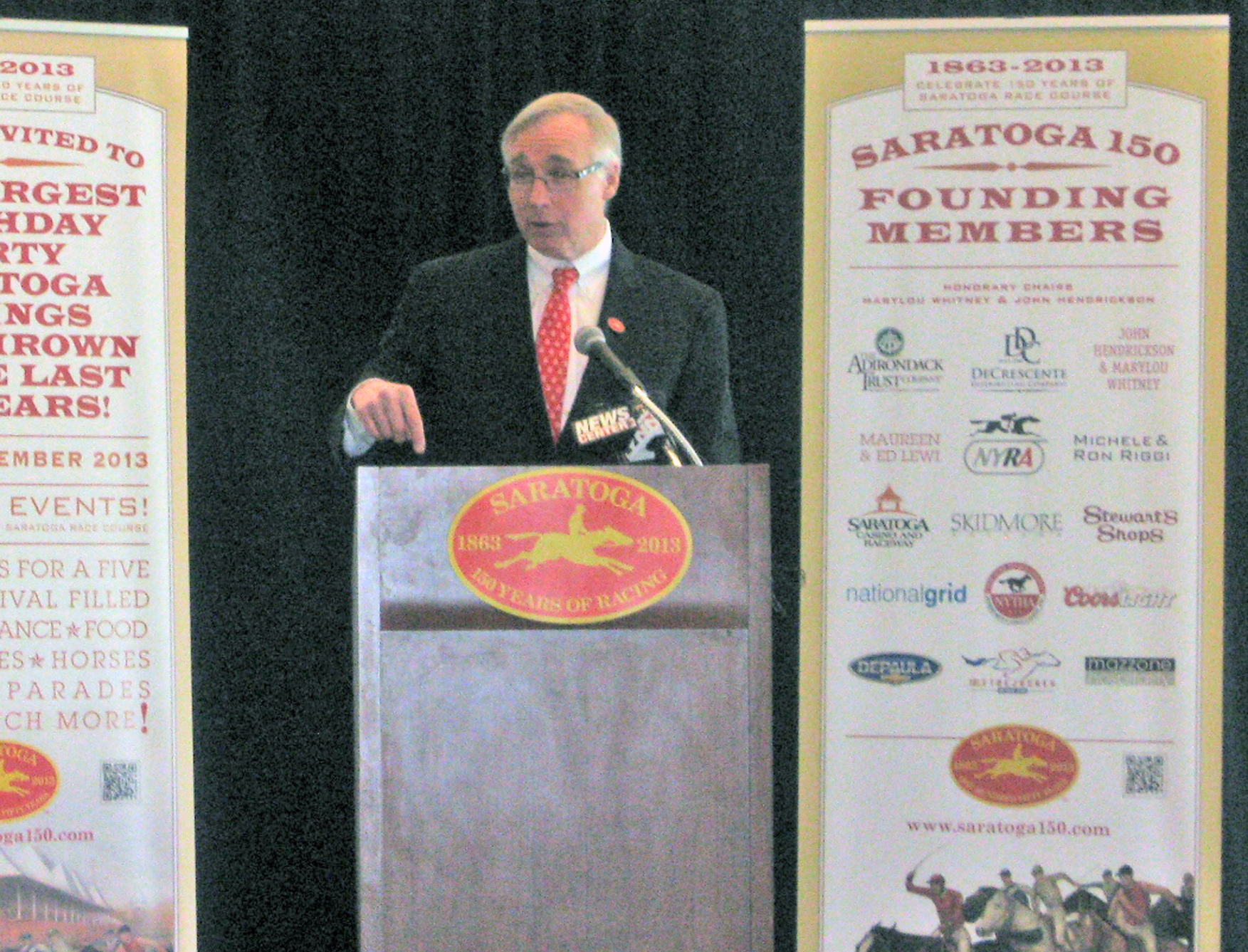 In 1863 the Civil War was raging. In January
of that Year, President Abraham Lincoln
issued his iconic Emancipation Proclamation,
decreeing that slaves were free men. In November,
he issued his legendary Gettysburg
Address.

And in between that, on Aug. 3, a four-day
horse racing meet was held off Union Avenue
in Saratoga Springs, organized by John Morrissey,
“a onetime street brawler who later
became an undefeated boxing champion,
legendary gambler, and influential politician,”
according to Brien Bouyea, communications
officer with National Museum of Racing and
Hall of Fame.

Now, 150 years later, the city has already started a celebration of the anniversary of Saratoga Race Course that will last for five months, with over 200 events, small and huge, affiliated with it. Known as Saratoga 150, it runs through Sept. 30.

“It’s very exciting,” said Joseph Dalton, director of the Saratoga 150 Committee that has organized the immense array of events. Some of the events were outlined at a event at Saratoga City Center on April 30, where Dalton and committee members like Charles Wait addressed the audience. Dalton said the list of events continues to grow. He said the ramifications go well beyond a celebration of horse racing.

“The word is getting out,” said Dalton, noting that local PBS television station WMHT is doing a special on Saratoga racing. National sports media and non-sports media are already touting the celebration and will be covering aspects of it. At the Kentucky Derby on May 4, fliers and other promotional materials were distributed ad there have been media inquires from overseas.

“It’s going to give us national exposure and that will bring business to Saratoga, Dalton said. “It could even bring businesses into Saratoga. The national coverage has a lot of different benefits.”

Horse racing alone contributes about $200 million per season to the area’s economy, said Dalton, citing an independent study commissioned by the Saratoga County Board of Supervisors.

Among the events is a kickoff celebration and fireworks on May 24 on the Saratoga Performing Arts Center grounds. In June there will be a Revolutionary War encampment in Congress Park, the first of three encampments from different periods of American history. Also in June, a film festival will run at Skidmore College featuring Hollywood films associated with Saratoga and racing.

Information on all the gala events is available at www.saratoga150.com

“In 1963 they had a big festival for a month for the 100th anniversary,” said Dalton, “with everything from chicken barbecues on Broadway to formal balls. Saratoga has grown so much, we decided to make it a five month festival with 100 events.”

That quickly exploded well beyond, he noted, and the list of affiliated events continues to grow. Mark Baker, a committee member and City Center president, said even professional boxing matches will come to the center in July. “Pro boxing has always been a part of the city’s history” going back to Morrissey in the 1860s.

With the purchase of a $15 Saratoga 150 medallion at any branch of the Adirondack Trust Co., people will be able to attend all the major events of the committee.

The crimson and gold medallion guarantees free admission for one to the August Bettor Ball with three generational bands playing in separate rooms at the Saratoga Springs City Center; three nights of Saratoga/ Horse Film Festival at Skidmore zankel Music Hall in June; and the May 24 Family Night at the Spa with ethnic bands, clowns, magicians, storytellers, a wild life show, mentalists, and the giant fireworks show.

In addition to free entry to the Saratoga Race Course on any 2013 Monday, medallion holders will also save $5 off entry to any classical program of 2013 at SPAC.

By visiting the Saratoga 150 website people can check the events calendar, and register for free to be one of five people selected to place a $15,000 wager with someone else’s money on a Saturday feature race at the track this August.

Founding members of the Saratoga 150 celebration include: