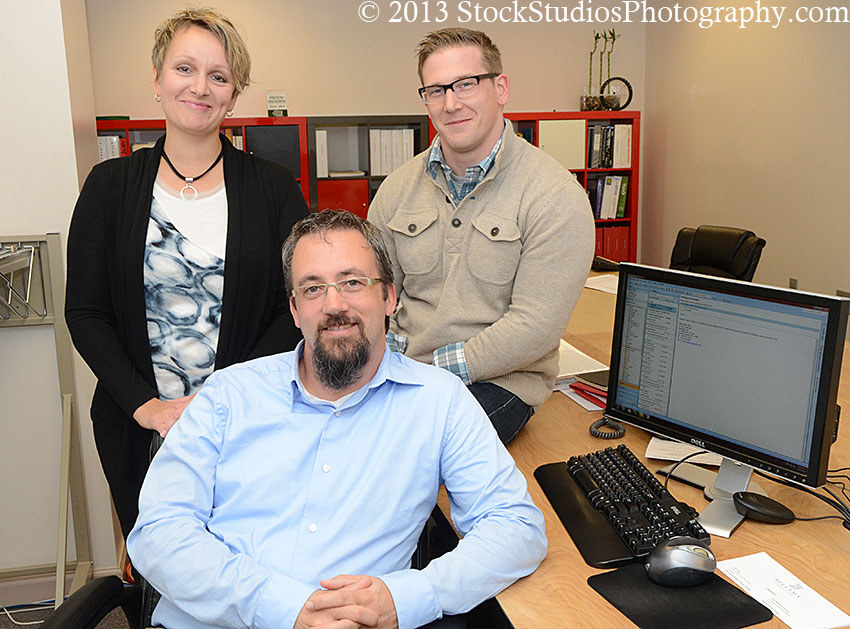 David D’Amore, center, poses with Virginia D’Amore and Mark Patterson at the new offices of AND Architecture and Design at 125 High Rock Ave. AND also has a Johnstown office

In mid-October, David D’Amore opened
new offices of AND Architecture and Design
at 125 High Rock Ave. in Saratoga Springs. It is an expansion of AND Architecture
and Design in Johnstown, established nine
years ago, serving customers in Fulton,
Montgomery, and Hamilton counties.

AND is D’Amore’s shorthand for the way
in which architecture joins together people
“and” places. D’Amore, a native of Johnstown.
He spent the first couple of years
after completing his architecture degree
commuting between Johnstown and Latham
to work for Trudeau Associates.

D’Amore said he looks forward to a sense
of “rejuvenation” working in Saratoga.

He is pleased to see other architects working at a point of balance between traditional and contemporary design that finds ways to mesh historical architecture with projects that address contemporary needs.

He seeks clients who appreciate the time, energy, and research that go into members of an architectural firm doing what it is that they are trained to do. He anticipates projects that demonstrate the value of good design in an environment that is healthy for the community.

D’Amore has experience with residential, commercial, and institutional projects. He worked on K-12 school projects in Baltimore and in Lancaster County, Pa. He recently completed work for Fulton-Montgomery Community College in Johnstown that included renovating and updating a cafeteria and a student activity center.

He said he enjoyed the opportunity to employ “a more modern palette” of color and design options. AND was also responsible for internal design on modular construction student housing on campus.

D’Amore admits to a “fondness” for internal “fit-out” projects at the commercial level, doing internal design updates on existing structures.

He said he has worked on urban “infill” projects, taking under used parcels and re-purposing them in dense urban settings. An example, he said, is taking a relatively small parcel and creating a design for its use as the site of a six-story corporate banking center.

Whole house designs and kitchen and bathroom renovations are all areas in which AND has experience. They have done both single and multi-family projects. D’Amore said some of the big-box stores’ kitchen and bathroom design packages can provide satisfactory design solutions for many people not seeking a more customized design. But AND Architecture is willing to work with customers to provide architecture services while leaving internal design decisions to the client’s discretion.

With regard to energy efficiency considerations, D’Amore favors a responsible stewardship, ensuring that building envelopes are constructed snugly enough to avoid waste of heating and cooling energy. Though there are companies who seek the prestige of LEEDS certification, D’Amore does not see a lot of companies willing to spend the additional dollars for the certificate and plaque. He has worked on projects involving photovoltaics and wind energy, but said he has not seen a great market demand for these alternative energy sources.