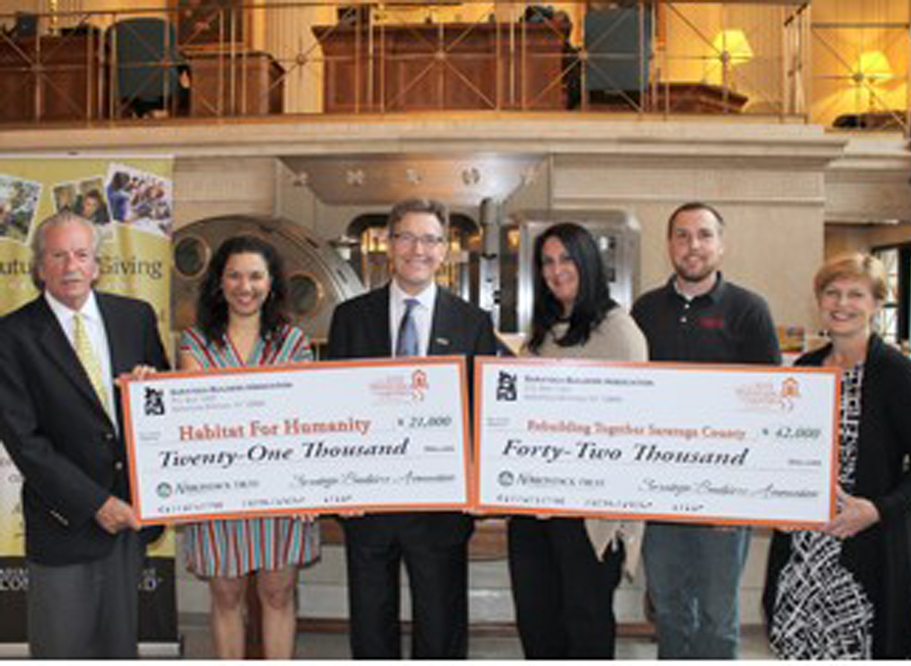 The Saratoga Builders Association presented checks to Rebuilding Together Saratoga County and Habitat for Humanity of Northern Saratoga, Warren and Washington Counties

The Saratoga Builders Association announced
it raised $63,000 from the 2013
Showcase of Homes to benefit two nonprofit
organizations, Rebuilding Together
Saratoga County and Habitat for Humanity
of Northern Saratoga, Warren and Washington
Counties.

The Saratoga Builders Association has contributed
over $800,000 to local charities from
this event, said association officials.

The 2013 edition of the Saratoga Showcase
of Homes presented by Suburban Propane
was a success, with 10 award-winning builders
presenting 14 homes. Officials said over
3,000 people purchasing tickets to tour the
new homes on display in Saratoga County over
three weekends.

The builder’s artistry, along with the many talented designers who helped showcase their work, gave the community an opportunity to preview current trends in building, landscaping, decorating and interior design, the association said.

In what has become an autumn tradition in the area, the Saratoga Builders Association is looking forward to keeping the long running show, which just concluded its 18th year, an integral part of the fabric of the fall season, officials said.

In this new People’s Choice category the winner was Carla Kuchar of Zest, Saratoga Springs.

Officials said the 2014 Saratoga Showcase of Homes dates have been set for Sept. 20-21, 27-28 and Oct. 4-5. For more details on the homes and builders, award winners, virtual tours and more, visit www.saratogashowcaseofhomes.com.