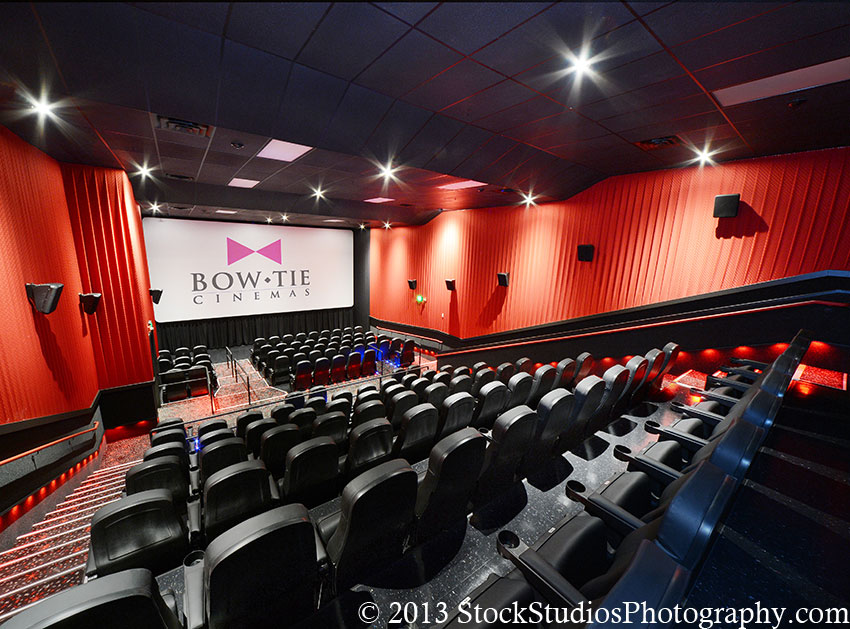 This is one of the 11 luxury theaters at the new Bow Tie Criterion Theater in downtown Saratoga Springs, featuring custom leather chairs, and Dolby digital 7.1 surround sound

The Bow Tie Criterion Cinema, a new
multi-screen movie theater complex in
downtown Saratoga Springs is up and running.
The city now has a cinema since the
Community Theater on Broadway closed
in 1980.

“We specialize in running theaters downtown,”
said Joe Masher, chief operating
officer, Bow Tie Cinemas, at a media tour
of the facility in mid-October. The tour was
just days before the facility, at 19 Railroad
Place, at the corner of Church Street,
opened to the public.
“They really become an important part
of the community,” he added.

The Bow Tie company has also opened
another set of deluxe cinemas at the Wilton
Mall, refurbishing the area where theaters
once existed, but closed last year.

The downtown theater, on the first floor of a grand three-story structure built by Bonacio Construction, boasts 11 luxurious auditoriums including one large-format, dubbed by the company as “BTX – Bow Tie Xtreme.”

Informz, an e-mail marketing company currently on Congress Street in Saratoga Springs, has already announced plans to move its operation to the third floor of the building. At the cinema tour, Sonny Bonacio, president of Bonacio Construction, said most of the second floor office space has also been rented. He said he could not yet release the name of the company that will occupy it.

But he noted that of 58,000 square feet of space in the building, only 4,000 is available. “We could not be happier” with that situation, Bonacio said.

The 11 new screens at the Criterion downtown are part of an $18 million building on Railroad Place. All are luxurious, but the gem is the BTX – Bow Tie Xtreme features a 2,000-square-foot screen, custom leather rocking chairs, and enhanced Dolby Digital 7.1 surround sound.

“We do not intend to compete with the many fine restaurants in the city,” noted Masher, but it gives customers extra options besides the usual movie theater snacks. A beer and wine café will also be part of the experience.

“Movie theaters have become entertainment centers,” said Craig O’Connor, vice president of marketing and concessions for Bow Tie Cinemas. He said there will be different kinds of movies shown downtown.

At the Mall, it will be the usual first-release films ranging from action to popular and all the genres. It has deluxe eight screens, including one BTX – Bow Tie Xtreme.

The downtown theater, “more of an upscale, sophisticated theater,” said Masher, will have art films, concert films and even opera selections. It will have first-release popular movies as well.

Masher said people will be able to use their smartphones to buy tickets and scan them in the spacious lobby. One of the projection areas with its digital equipment is visible from the lobby. Movies are received via satellite and downloaded on the complex’s server. “There’s never a scratch and the sound is always great,” said O’Connor.

Both sites have a private birthday party room available for rent at the theaters. About 30 people are employed at each site, downtown and at the mall.

Before opening to the public, the downtown Criterion Cinemas was the site of a gala fundraiser to benefit for the Saratoga Hospital Foundation, which raised some $2,400, Masher said.

Bow Tie Cinemas is a four-generation, family owned company. Founded in 1900 by vaudeville impresario B.S. Moss, the company is the oldest theater circuit in North America, and is the eighth largest. Bow Tie Cinemas operates 382 screens at 62 locations in five states.

In New York state, the company operates 113 screens at 22 locations, including Movieland in Schenectady, the world-famous Ziegfeld Theater and Chelsea Cinemas in New York City.