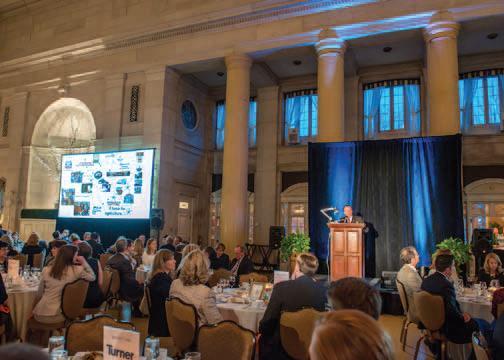 More than 300 attendees including
representatives from some of Tech Valley’s
largest manufacturers joined the Chamber
of Southern Saratoga County in celebrating
its 47th annual dinner on March 27 at the
Hall of Springs in Saratoga.

The event featured six awards being
given to local businesses.

This year, an emphasis was placed on
demonstrating the Chamber’s Saratoga
County Community Development Program,
and in particular its effects on the marine,
agriculture and manufacturing industries.

The Endurance Award went to First National Bank of Scotia for “dedication to achieve long term success, as well as demonstrating tenacity and perseverance.”

The Inspiration Award winner was TreePaad Fun Center, a business that suffered a fire in 2013 and was closed for over six months, but rebuilt in the same space and overcame several hurdles.

The Entrepreneurial Success winner was JC Sweet & Co., a web design company in Burnt Hills that “has exhibited a talent and passion that has resulted in outstanding success exhibiting characteristics that include innovation, risk-taking and exceptional creativity in business.”

The Strong Community Award winner was Curtis Lumber, “actively involved in our local community on a regular basis while supporting and engaging with local businesses and organizations,” the Chamber said. The company donated materials for numerous projects, as well as supported the Southern Saratoga County Chamber Angels program, the Rotary and many other causes.

The Education & Business Partnership Award winner was Globalfoundries, which formed a partnership with Ballston Spa Central School District to further “a shared mission of educational excellence.”

The Chamber Angels Award winner was Lisa Towle, director of human Resources for Cengage Learning, who the Chamber said “has been the main driver and motivator behind their charitable efforts … Each year, she encourages employees to choose at least one ornament from a tree and to buy the suggested gift for the child listed. She is humbled each year by the fact that the more than 100 ornaments are claimed by employees within hours of it being put up.”

Chamber President/CEO Pete Bardunias delivered an annual update on the priorities of the Chamber and its accomplishments in the past year.

He said that despite being the smaller of two large chambers in Saratoga County, the Chamber of Southern Saratoga County is now believed to be the 10th largest in eastern New York state in terms of membership, now topping 1,060.

He noted the dramatic increase in marine business members – starting from only two such businesses in 2011 and increasing to 33.

Another area where the Chamber has improved its membership and involvement is agriculture, Bardunias said, where membership has more than doubled and new Farm-to-Table initiatives are underway involving both traditional truck-based and waterway-based transportation methods.

“We now are working with four separate initiatives involving alternative fuel-propelled marine cargo vessels,” said Bardunias. “This will fill an important niche for southern Saratoga County’s small and medium sized farms along with truck transport programs being developed in conjunction with Sysco Albany, located in Halfmoon.”

He said of the importance of businesses and individuals becoming involved in the Chamber’s community efforts, “If you want to make a tangible difference in our downtowns, neighborhoods, historic treasures, and open spaces, its time to make us your movement in 2014.”