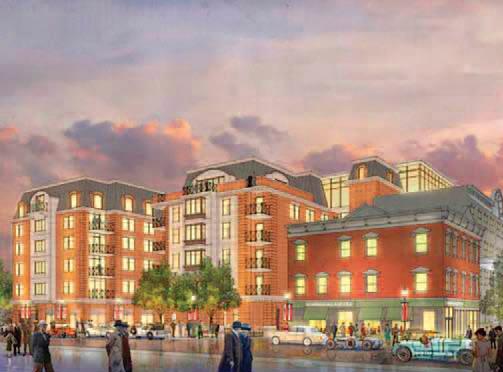 If all goes according to plan, the Rip Van Dam
hotel on Broadway will be revived, enlarged, and
in operation in early 2016.

“I’m very excited about bringing back the classic,
historic look of the hotel, the way it was originally
designed and bring it back to its original use,” said
Bruce Levinsky of Merlin Development in Saratoga
Springs, a partner in the development group. The
current hotel area is 179 years old.

The building will be six stories high at the corner
of Broadway and Washington Street and have 176
upscale rooms. On the top will be a glass enclosed
dining room/banquet hall where up to 200 people
will be able to eat and look out over the city’s
downtown area.

The project has been in the planning stages for over a year and finally received city Planning Board approval in March.

Levinsky said he will apply for the building permits this summer and construction could get under way in September.

It involves renovating the present building, that includes Maestro’s at the Van Dam restaurant, and adding on in the rear of the building that is currently a parking lot. For parking, a five-tiered parking garage will be built on Hamilton Street in the spot where a parking lot now exists behind the Wendy’s restaurant.

It will have about 350 spaces, Levinsky said. There will be valet parking to get people from their cars to the hotel and vice versa.

There will be sitting areas and landscaping and heated sidewalks along Broadway from the corner of Washington to the far side of the Adelphi Hotel, Levinsky said.

The new hotel “is going to be the most exciting building in Saratoga on the most prominent corner,” said Levinsky.

The Rip Van Dam is next to the Adelphi Hotel, which was built in 1877 and is undergoing significant interior renovations. The two hotels share a foundation and other basic service amenities. “We have a very close relationship with the Adelphi,” Levinsky said.

Levinsky said he is working with the Adelphi’s owners to coordinate deliveries and minimize downtown truck traffic. The hotel’s impact on traffic was one of the points of contention for the Planning Board over many months.

Levinsky said three traffic studies, including one commissioned by Saratoga Springs, showed the new hotel would not create significant traffic issues on that intersection.

Maestro’s restaurant takes up a good portion of the first floor of the current structure. There is also a Starbucks coffee shop and the Candy Company of Saratoga Springs, a small shop whose address is 5 Washington St. The candy store will be offered space within the hotel, developers said.

Starbucks will remain. Levinsky said there will be a three- to four-month period where Maestro’s will be closed while construction is going on. The existing restaurant and kitchen will undergo some remodeling during that time. That period will “probably be at the later part of construction,” said Levinsky.

When the project is complete, “We anticipate Maestro’s will be providing food and beverage service” for the hotel and its rooftop dining hall. Food for the rooftop will be cooked on the first floor at Maestro’s and brought up to the dining hall.