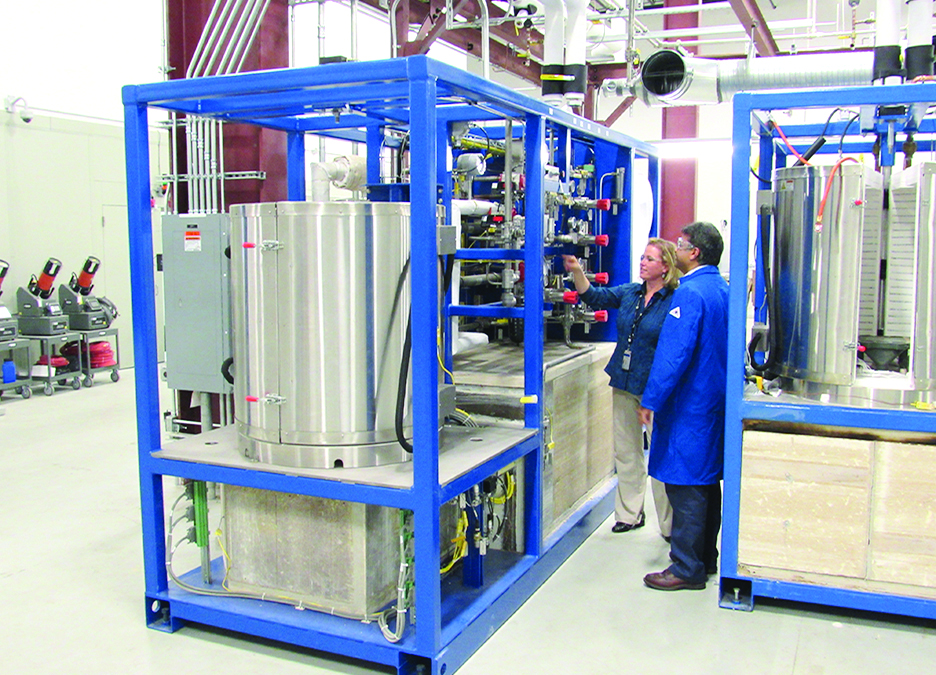 Inspired by the advanced manufacturing
coating breakthrough and system integration
in the labs at GE’s Global Research Center in
Niskayuna, the company said in late July it
is launching the GE Fuel Cells business as a
separate start-up company, located in Malta.

Efforts are underway to ramp up an the
facility with 17 full-time employees and pilot
manufacturing capability, company officials
said.
The plant is located in the Saratoga Technology
+ Energy Park off Hermes Road. That park
is operated by NYSERDA.

The fuel cell business grew out of GE Global
Research, but it now operates as an independent
unit with its own board of directors, the
company said. The cells will be manufactured
at the Malta plant. The pilot facility is already
filling up with robotic thermal spray equipment,
fuel cell test stations, screen printers
and towering bulk gas storage tanks.

Officials did not give a timeline for startup.

According to GE officials, a fuel cell works
like a battery, using a simple chemical reaction
to provide energy. In fuel cells, this reaction involves
hydrogen molecules abundant in natural
gas and oxygen from ordinary air.

The process is full of pitfalls, officials explained
in the company blog. Car companies,
for example, have tried to make fuel cells work
as a replacement for the internal combustion
engine for more 20 years without commercial
success. “But scientists in GE labs recently
cracked an important conundrum involving
one iteration of the technology called solid
oxide fuel cell, or SOFC. The breakthrough
allowed the company to start building a new
pilot fuel cell manufacturing and development
facility” in Malta.

“The resulting technology could soon start
producing electricity around the world,” the
company said.

According to GE, the new system’s power
generation efficiency can reach an unprecedented
65 percent. Overall efficiency can grow
to 95 percent when the system is configured to
capture waste heat produced by the process.

The basic configuration of the system can
generate between 1 to 10 megawatts of power.
The new fuel cell is using stainless steel in
place of platinum and rare metals.

“The cost challenges associated with the
technology have stumped a lot of people for a
long time,” said Johanna Wellington, advanced
technology leader at GE Global Research and
the head of GE’s fuel cell business. “But we
made it work, and we made it work economically.
It’s a game-changer.”

At the Malta plant “We have all of the speed,
agility and focus of a small start-up while leveraging
the strength of a big company” she said.

Wellington said the fuel cell, which received
financial backing from GE’s ecomagination program,
can generate electricity at any location
with a supply of natural gas. It can get going
quickly, does not need new transmission lines
and produces lower emissions than conventional
power plants.

“The combination of fuel cells with a gas engine
ensures consistent full power generation
with higher energy efficiency than any current
technology on the market,” said officials in
a company fact sheet. “The system can also
be operated as a combined heat and power
plant with a conversion efficiency exceeding
95 percent.”

GE’s Solid Oxide Fuel Cell emissions are
lower than any conventional power generation
plant and can generate 1-10MW of power, the
company claims.

Officials outlined the basics of how the fuel
cell system works thusly:

â€¢ Fuel is pumped through a solid oxide fuel
cell, generating the bulk of the electricity.
â€¢ The exhaust gases of the fuel cell are
sent to the gas engine, maximizing the energy
extraction from the fuel.
â€¢ Emissions are low and environmentally
friendly mostly consisting of water and carbondioxide.