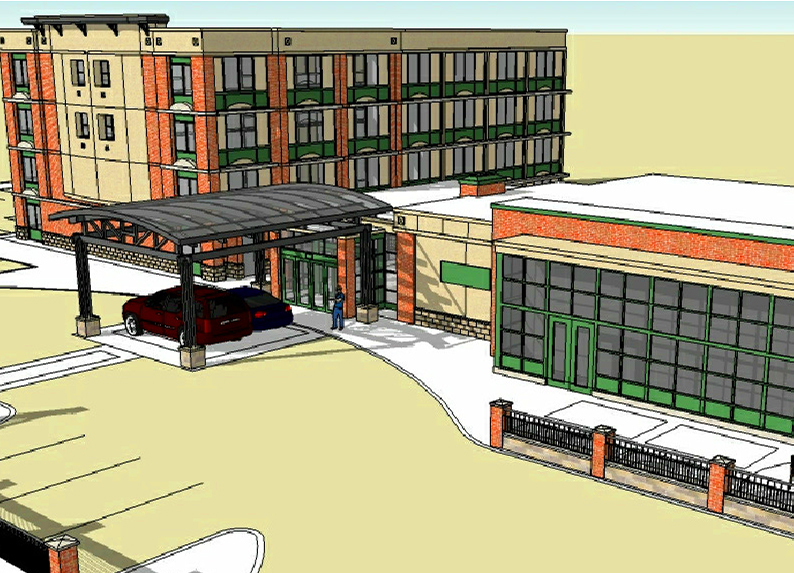 This rendition shows how the exterior of Holiday Inn of Saratoga Springs will look when the current entrance canopy is removed and 1,000 square feet of interior space is added

The Holiday Inn of Saratoga Springs is
preparing for an extensive renovation and
expansion process, spending $2.5 to $3 million
on remodeling.

The Holiday Inn, at 232 Broadway, recently
received an extension on its operating license
through Intercontinental Hotels Group, owner
of the Holiday Inn brand. The license will allow
the Saratoga location to operate until 2024.
“With that comes the obligation to renovate”
said Cindy Hollowood, general manager of the
hotel.

All hotels that qualify for an extended operating
license are required to renovate their
property, according to Intercontinental Hotels Group guidelines. Part of the motivation to
renovate is a desire to modernize and keep up
with customer needs, said Hollowood.
The project is expected to be completed by
spring 2016.

Several other hotels are being built in
Saratoga Springs or are currently undergoing
renovations. These improvements will help the
Holiday Inn stay competitive, Hollowood said.
She said all 168 guest rooms in the hotel will
be refurbished. Fresh wall paper and paint will
be applied. New furniture will be purchased
for the rooms. Fresh bedding and mattresses
will be included.

Approximately $10,000 will be spent on the remodeling of each room, according to
Hollowood.
Rooms will be upgraded during the winter in
order to not disturb guests during the popular
summer season. Sixty units will be worked on
this winter, and the remainder the next winter,
Hollowood said, adding that renovations will
not interfere with guest stays.

The public areas of the Holiday Inn will also
receive cosmetic improvements. Bookmakers
Restaurant and Lounge will receive some
upgrades, as well as the hotel ballroom, the
general manager said. Renovations include new
tables and chairs, and lighting. The front lobby
will be expanded and include a new fireplace.

Extensive exterior upgrades will include
removal of the canopy and drive-through area.
With that, approximately 1,000 square feet
of interior space will be added to the hotel.

A wrought iron fence will be built to mimic
the entrance to Congress Park. There will be
a hedge row and a decorative walkway to the
building from Broadway. More parking spaces
will be added, Hollowood said.

R.W. Bell Construction will be providing
services to the exterior of the building.